Home Huawei Huawei Nova 5 Series launched: Will make it to Nepal as well 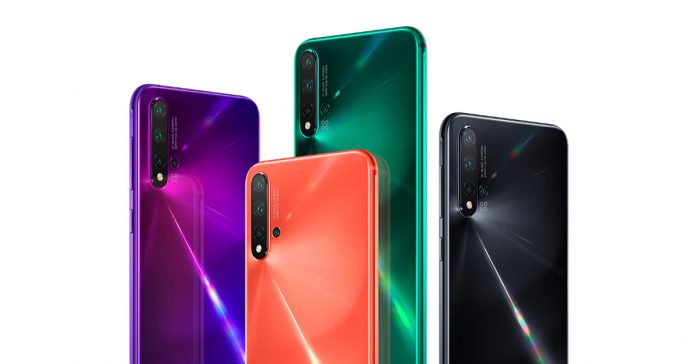 Huawei has a good lineup of smartphones in almost all price ranges. Their flagships like the P30 and P30 Pro are still one of the best flagships out there. And they have some good mid-rangers like the Huawei Y9 2019 and the likes. But, the most desirable of them all is their Nova series. The Nova series combines the premium look and build with enough power and an affordable price tag. But, of course, Nova series comprise of phones in all price ranges, as well. And so, Huawei Nova 5 series launched in China very recently.

The Nova 3 series, with the Nova 3 and Nova 3i were highly popular. But the Nova 4 didn’t get as much attention, probably, because there was only one variant. However, this time, the Huawei Nova 5 series brings 3 variants: the Nova 5 Pro, Nova 5 and Nova 5i.

The Nova 5 Pro is the most premium of the three phones it’s launching. This phone carries the Nova legacy forward – to provide flagship performance in a more affordable price. So, needless to say, it features the Kirin 980 processor, and combined with 8 GB RAM, it performs as good as the flagships from Huawei. But of course, there has to be some difference between flagships and premium mid-rangers. So, this phone comes with a 6.39″ Full-HD+ OLED screen, with a water-drop notch. It does pack a quad-camera setup at the back, but they’re not as good as the ones on the P30 Pro. The camera comprises of a 48 MP main lens, a 16 MP ultra-wide lens, 2 MP depth sensor and another 2 MP macro lens. The macro lens is a new addition, but seems redundant, because the P30 and P30 series could do it without a dedicated lens. Anyway, there’s a quad-camera setup, which counts for something. In addition, the selfie camera is a 32 MP lens.

Besides these, the Nova 5 Pro packs a large 4000 mAh battery and the flagship grade 40-Watt SuperCharge as well.

The Nova 5 is the middle of the line in this series. This is a different approach, because, previously, the Nova 3 and the 4 held the helm. But with the arrival of the Nova 5 Pro, it changed. Still, this phone packs the latest mid-range chipset, the Krin 810. This comes as quite a relief because Huawei had been stuck on the 710 for its mid-range phones for quite some time. The 710 showed up on almost every mid-range Huawei or Honor phone, so, this is a great relief. Also, this Kirin 810 has a significant boost over the 710 and it even outscored the Snapdragon 730, which is another good news. Besides the new processor, the Nova 5 packs identical specs to the Nova 5 Pro – the same screen, same camera setup, same battery and everything else. But with these specs, this phone will probably lie somewhere between a mid-range device and a premium mid-range one…

Even with the Kirin 810 out, Huawei couldn’t let go of its ever-faithful 710 chip, it seems. Because… they still packed the chipset into the Nova 5i, which is the most affordable of the bunch. And this one has quite a few differences from the other two. For starters, there’s an IPS LCD display with a punch-hole on the left. I would’ve liked similar approaches on the Nova 5 and 5 Pro as well, but they stuck with a water-drop notch in there. Anyway, the resolution is still Full HD+ in here. You still get the quad-camera setup with some adjustments. While the dedicated macro lens and the depth sensor stay the same, the other sensors got toned down by half. It packs a 24 MP main lens and an 8 MP ultra-wide lens. And the selfie camera is a 24 MP sensor, too. Also, the memory options rest at 6 / 8 GB with 128 GB storage. In addition, the battery is still a 4000 mAh unit, but it packs the standard 18-Watt Fast Charging instead of a SuperCharge.

So, you can say it is an aggressively mid-range smartphone with the specs it packs.

Despite all of the hurdles, Huawei does plan to launch the Nova 5 Series in Nepal as well. Because the Nova 3 series did make quite a splash in here. So, it somewhat makes sense. And if you’re worried about the Android ban thing, Huawei Nepal promises to refund you fully if Google apps stop working on your Huawei phone. So, I guess, there’s nothing to worry about, really.