Home Huawei Huawei’s HiSilicon Kirin 980 chipset announced: Shaping up to be a winner?

IFA 2018 is going on in Berlin and there are loads of mind-boggling tech gadgets showcased in the event. And in that eye-catching tech event, Huawei is surely one of the show stoppers. The Chinese tech giant, which has already stunned us with its three-camera setup in the Huawei P20 Pro this year has something different on its shelf this time around. This time, the tech titan has showcased its brand new Huawei HiSilicon Kirin 980 chipset, which is the world’s first SoC (System-on-Chip) to feature a 7nm architecture. And this is not the only area, where the chipset has pioneered. There are plentiful of sectors, where the SoC flagged to be the first but we will get into that later.

Qualcomm Snapdragon 845 chipset was adopted by most of the Android smartphone manufacturers in the year 2018. And this chipset was better than Huawei’s last year’s chipset HiSilicon Kirin 970. So, Huawei seems earnestly rivaling against the SD845 chipset this time. And the keynote on the IFA 218 seriously cues that. When the advancement introduced in the chipset is properly acknowledged, one can certainly find its superiority over the SD845.

On the memory front, the Kirin 980 has 20 percent better bandwidth and has 22 percent lower latency when looked side by side with the SD845. This implies that apps can now launch faster and users will not have to experience any sorts of sluggishness. In terms of gaming, the Kirin 980 promises to produce 22 percent higher frame rates than the SD845 but keeping the power consumption level 32 percent lower.

Also Read: Things to consider while choosing a smartphone SoC

In the photography arena too, the chipset has got some handsome upgrades. The chipset features Dual ISP (Image Signal Processor), making use of which, the chipset delivers 46 percent faster camera processing over its predecessor, maintaining a 23 percent improvement in power efficiency while recording. There is also an improvement in latency by 33 percent.

Since Artificial Intelligence (AI) is being used as a buzzword lately in every technological scenario, Huawei has given quite serious attention towards it. The tech giant had already provided the NPU (Neural Processing Unit) for the AI processing in the last year’s Kirin 970 chipset. And this time, Huawei doubled its AI processing aspirations has taken a huge leap by providing dual NPU in its newest chipset. This made the Huawei HiSilicon Kirin 980 chipset the first of its kind to feature Dual NPU inside it. With this setup, the SoC can perform an AI-assisted image recognition at the rate of 4500 images per minute. Huawei also showed that, by the same measure, the Snapdragon 845 could only reach up to 2,371 whereas the Apple’s A11, which enjoys performance leads in other categories, trailing far behind with only 1,458.

In terms of architecture, the Kirin 980 uses a new octa-core architecture (4 x Cortex A-76 + 4 x Cortex A-55) that mixes big, little and medium cores for more efficiency. The two big cores run at 2.6GHz and get triggered when demanding tasks like gaming is on the progress. The two middles cores are clocked at 1.92GHz, which comes into play when less-intensive processes are going on. Browsing, texting, etc. can be taken for an instance. The four little cores, which are clocked at 1.8GHz kicks in when there is not much of a task. These cores are best used for the background processes or playing music since they demand less energy juice.

Also debuting in the new Kirin chipset is the Mali G76 GPU, which promises 30 percent more efficiency and lets the devices run high-end and graphics-demanding games with maximum fluidity. Also, there is chipset enjoys 1.4Gbps Cat 21 LTE modem, which promises to deliver faster cellular data transfers. In addition, the chipset supports ultra-fast 2133MHz LPDDR4X RAM, which will ensure speedier performance while multitasking. Furthermore, the Kirin 980 will offer the world’s fastest smartphone Wi-Fi speed, clocking in at 1,732Mbps. With this speed, this newbie has surpassed the SD845 by huge margins since the best speed of SD845 is 866Mbps with a Qualcomm modem and 1083Mbps with a third-party modem. 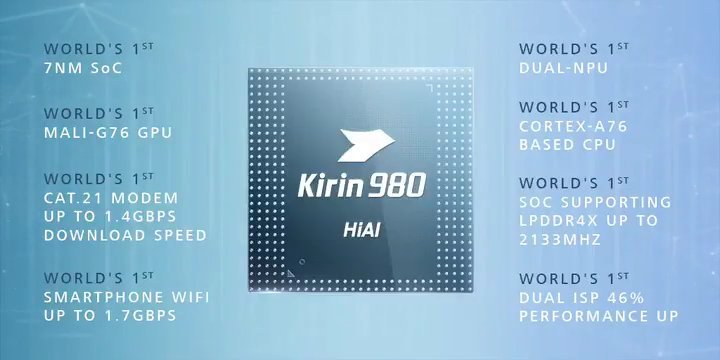