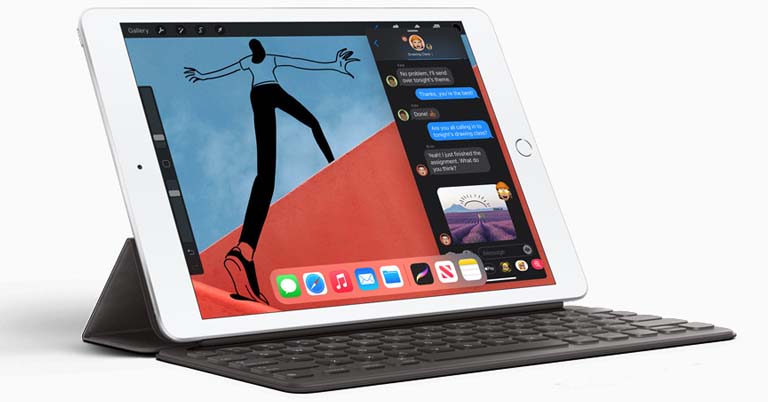 Apple announced the eight-generation iPad during the “Time Flies” event. It’s the cheapest iPad you can buy right now and is the successor of the last year’s 7th gen iPad (2019). Let’s check out the specs, features, official price, and availability of the iPad 10.2 (2020) in Nepal. 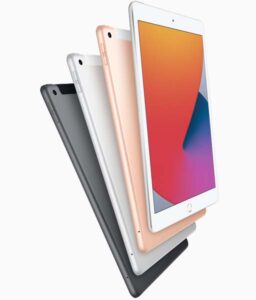 There is nothing new about the design and looks of the 8th generation iPad. The body of the new iPad measures 9.8 x 6.8 x 0.29-inches. The Wi-Fi-only model weighs around 490 while the WiFi + Cellular model is slightly heavier at 495 grams.

Its 10.2-inch IPS display has multi-touch support. The display has a pixel density of 264 PPI. Apple is claiming up to 500 nits of brightness. The panel supports the first-generation Apple Pencil and has an oleophobic coating on top to avoid fingerprints.

The biggest talking point of the device is its performance. It features the A12 Bionic chip that offers up to 40% faster performance than its predecessor which had A10 Bionic. Similarly, graphics performance has been boosted by up to two times. Apple claims that the new iPad is twice as fast as the top-selling Windows laptops, up to three times faster than top-selling Android tablets, and up to 6 times faster than the top-selling Chromebook. The new iPad 2020 is also the first in the lineup to come with a neural engine. It enables the device to run machine learning algorithms and AR apps.

The new iPad ships with iPadOS 14. It now comes with redesigned widgets, new sidebars, a streamlined toolbar, an Universal Search feature, and a new compact design for FaceTime and calls. It also improves the Apple Pencil experience and supports an external keyboard as well. For example, the new iPad 2020 supports Smart Selection that uses Machine Learning to differentiate handwriting from drawing. Similarly, it also supports Shape recognition and Data Detectors. The other change is the introduction of the Scribble feature. With this users will be able to handwrite directly in any field text using the Apple Pencil. The 8MP rear camera has an aperture of f/2.4. It can record 1080p videos at 30fps. Similarly, the 8th generation iPad can shoot 720p slo-mo videos at 120fps. There is also the Touch ID for security purposes. It has a 32.4 Watt-Hour battery that can last up to 10 hours on web surfing (on Wi-Fi) or up to 9 hours on a cellular data network.

Apple iPad 10.2 (2020) is now available in Nepal with a starting price of NPR 58,000. It is available from resellers like Olizstore and Evostore.