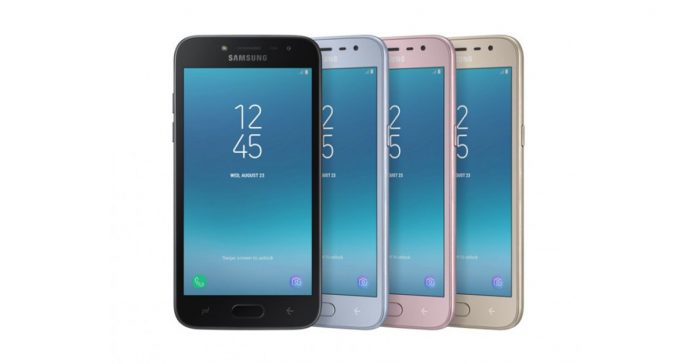 Samsung Galaxy J2 Pro is an entry-level smartphone which was well-received last year. For those who wanted a Samsung phone under 15k, this was a go-to device. Unlike cheap Samsung phones in the past, it was not bad by any means. The phone offered AMOLED display, selfie flash and 4G connectivity, all at an affordable price. Recently, Samsung has silently enlisted the J2 Pro 2018 on their official website. The phone gets a refreshing visual overhaul which makes it homogeneous to the Samsung’s J series.

The Samsung Galaxy J2 Pro 2018 on the first glance looks like a miniature version of the now popular J7 Pro. Unlike the J series, the phone will likely sport a plastic back with a metallic finish. The last gen featured an AMOLED display but to raise the bars even higher this year, the phone incorporates a 5inch Super AMOLED panel. The phone is powered by a quad-core processor clocked at 1.4GHz. The chipset is unspecified so my wild guess is either SD425 or Exynos 7570. Coupled with that you get 1.5GB RAM, an odd number indeed but Samsung has played this game for a while now. J2 Pro 2018 is a 4G enabled phone and comes with dual SIM slot. The best thing is probably the dedicated microSD card slot. It’s not cool even in 2018 to have hybrids. For optics, the phone offers an 8MP rear camera with LED flash and a 5MP front-facing camera with LED flash. Android 7.0 Nougat with Samsung’s Experience UI is giving life to this phone. Like the previous variant, it’s sad to see no fingerprint sensor on this device. J2 Pro 2018 is backed by a 2600mAh battery. The battery is removable so you can swap an extra battery to have a full charge in no time!

If Samsung Nepal manages to keep the price of this phone under Rs.15,000, then it would definitely give competition to the popular phones in the similar price tag like the Redmi 4A, Nokia 3 and Moto C Plus.