Looking for an inexpensive yet quality smartphone? In search of a good starter phone for your young ones? Or, maybe you’re looking to gift one to your parents who don’t care about the specs but strive for one that is good on the hands? If you answered yes to any one of those, then this article is just what you need. Thanks to the growing competition and innovation in the smartphone industry, you can get great smartphones for as low as Rs. 15000. In this list, we’ve compiled the best phones under 15000 in Nepal, which offer great design alongside impressive performance. 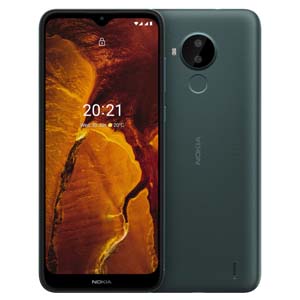 The first entry in our list of best phones under NPR 15000 in Nepal is the Nokia C30. This phone caters best to those who are looking for a “big” smartphone experience on a budget. For this, the C30 has a massive 6.82-inch LCD screen. It feature HD resolution—like most smartphones in this list.

Backing the big display is a big 6000mAh battery as well. Unfortunately, it fuels up via a micro USB connection and supports 10W charging only. Therefore, charging the phone from 0 to 100% takes over 3 hours here. On top of this, Nokia C30 weighs a whopping 237 grams—which is only slightly lighter than the iPhone 13 Pro Max.

Handling the performance side of things is the same Unisoc SC9863A chipset as in the Realme C11 2021. However, the C30 is available in a single 2GB RAM, 32GB storage variant only. While it originally retailed at Rs. 14,199, Nokia Nepal recently discounted the phone—thereby making it a better value than the C11 2021.

Nokia C30’s stock Android 11 Go experience is another thing to cherish about this budget phone. As for cameras, it brings a 13MP primary and a 2MP depth sensor at the back, whereas the 5MP selfie camera sits inside the teardrop notch. Moving on, we have a smartphone from Tecno called the Spark 6 Go. It’s the least expensive smartphone by the brand for the Nepali market. It has a plastic back with a gradient finish and a rear-mounted fingerprint sensor. In terms of cameras, you get two of them on the rear which includes a 13MP primary sensor and an AI lens. On the front, it has a waterdrop-style notch that holds an 8MP camera for selfies and video calls.

Moreover, the device is powered by a Mediatek Helio A20 chipset. It features a quad-core (4×1.8 GHz Cortex-A53) CPU while the graphics are handled by PowerVR GE6300 GPU. As a result, you should be able to enjoy lightweight games like Candy Crush, Clash of Clans. The processor is coupled with up to 4GB of RAM and up to 64GB of internal storage.

To note, the base 2/32GB variant of the device boots on lighter Android 10 Go edition while the higher 4/64GB variants come pre-installed with standard Android 10.

The Spark 6 Go has a 6.52-inch IPS LCD display with HD+ resolution. The screen has a 20:9 aspect ratio and has a peak brightness of 480 nits. Fueling the handset is a 5000mAh battery while it charges via a micro USB port. The battery should be enough to power you through the entire day on normal usage. 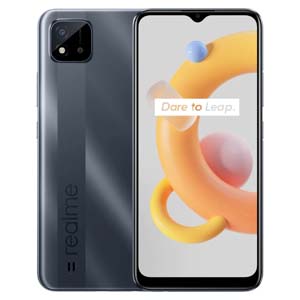 Mobile gaming has gotten so popular these days that people have begun expecting decent gameplay in phones at almost every price range. But while 2020’s Realme C11 followed this route with Helio G35 SoC, its successor brings a Unisoc chip instead.

More specifically, the Realme C11 2021 has Unisoc SC9863A SoC with either 2 or 4GB of LPDDR4x RAM. Then there’s 32/64GB of internal storage, which can be expanded using a micro SD card. By the way, the SIM tray hosts a dedicated space for the SD card.

Anyway, with this combo, the phone will handle the most basic everyday tasks just fine. Realme C11 2021 has an attractive design as well, thanks to the textured finish that we have seen in other phones from the company. The display on this phone is a 6.5-inch IPS LCD HD+ panel.

Moving to the camera, it has a single 8MP shooter at the back and a 5MP front-facing selfie camera. In terms of the battery, you’re getting a big 5000mAh cell that disappointingly charges via a micro USB cable and doesn’t support fast charging either. On the other hand, Realme Nepal decided to increase the price of this phone by Rs. 500 on both variants as well. 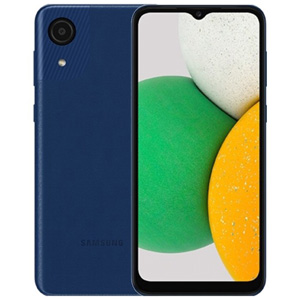 With the rising pressure from different Chinese OEMs, Samsung was losing its ground in the budget and mid-range market. The brand did, however, get off to a promising start last year with smartphones like the Galaxy M02s and A03s. The company has now launched the Galaxy A03 Core smartphone in Nepal, which is a well-balanced device for the entry-level segment.

Under the hood, the A03 core packs a Unisoc SC9863A chipset. In terms of day-to-day performance, finding out how Samsung has optimized the processor and its custom Android skin: One UI Core was quite surprising.

Upfront, Samsung has installed a 6.5-inch LCD screen with an HD+ resolution. As for the optics, the 8MP camera on the back and a 5MP sensor on the front. Moreover, Galaxy A03 Core is powered by a big 5000mAh battery that charges via a micro USB port. Sadly, it only supports a 7.75W charging that takes around 3 hours to fully juice up the phone. Next on the list of best budget phones under NPR 15000 in Nepal is the Moto E7 Power. With the E7 Power, the company has delivered a pretty reliable budget phone that gets the basics right. On top of this, the E7 Power also has official IP52 certification. Therefore, it is safe from dust and minor splashes of water.

Besides this, its remaining spec-sheet is quite similar to other budget phones in this price bracket. Upfront, the E7 Power host a 6.5-inch HD+ display with a wide 20:9 aspect ratio. Similarly, its all-plastic build quality is available in two finishes: Tahiti Blue and Coral Red. At the back, you’ll even find a fingerprint reader here.

Getting to the cameras, the Moto E7 Power brings a dual-camera array at the back. Leading the setup is a 13MP primary sensor, which has been accompanied by a 2MP macro shooter. On the other hand, you’ll find a 5MP selfie camera inside the teardrop notch upfront.

Powering this budget phone is MediaTek’s Helio G25 chip. While it is also available with 4GB RAM in the international market, only the base 2/32GB model is available in Nepal. Other highlights of the Moto E7 Power include a big 5000mAh battery with 10W charging and stock Android 10 (with Motorola’s My UX on top). 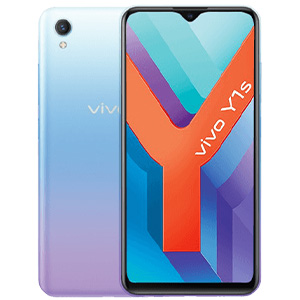 Taking the number 3 spot in our list of best phones under NPR 15000 in Nepal is Vivo Y1s. Available in two gradient colors—Aurora Blue and Olive Black—the design looks quite premium for a budget phone. The back also has 3D curves that aid in a comfortable grip. Moreover, the Y1s features a 6.22-inch HD LCD panel with a waterdrop notch.

Powering the handset is a fairly capable MediaTek Helio P35 processor which is coupled with 2GB of RAM and 32GB of internal storage. You can also expand the storage up to 256GB with a microSD card. The handset gets its juice from a 4030mAh battery—which is comparatively less considering other entries on our list. However, it should be enough to power you through a day on normal usage.

Talking about the cameras, you get a 13MP sensor on the rear and a 5MP camera on the front. The device doesn’t have a dedicated fingerprint sensor, yet one can use face unlock for biometrics. Next on the list, we have the Poco C31. It’s essentially a rebranded Poco C3 smartphone with a fingerprint scanner on the back. The rest of the specs and design are being carried forward as it is.

Starting off, the Poco C31 sports a 6.53-inches IPS LCD panel with HD+ resolution. It’s a TÜV Rheinland certified panel that reduces strain on the eyes. The front has a waterdrop style notch that houses a 5MP selfie. The body of C31 is P2i coated alongside rubberized seals against water damage.

One of the main attractions of the phone is its Helio G35 gaming-oriented SoC. The processor can deliver decent FPS on shooter games like PUBG Mobile Lite. It’s available on a sole 4GB RAM and 64GB storage variant. The latter is expandable via a microSD card.

Over on to the camera, the back of the device houses triple-camera arrays consisting of a 13MP primary sensor, 2MP depth, and 2MP macro lens. Powering the phone is a big 5000mAh battery. However, the phone uses a micro USB port and supports just 10W of charging that takes nearly 3 hours to fully juice up the phone from 0 to 100%. 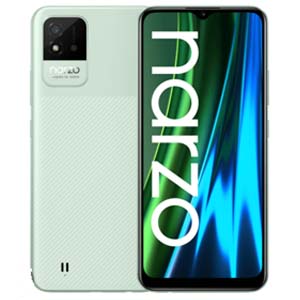 Finally, taking the crown of best mobile phones under NPR 15000 in Nepal is the Narzo 50i. Narzo is Realme’s sub-brand that focuses on youth-centric products with trendy designs and value-for-money products. Realme Nepal recently introduced Narzo in the country by launching two budget phones. Here, the Narzo 50i is the cheaper of the two. And like with other phones in this series, the 50i brings a pretty attractive design.

Available in two colorways, its “Mint Green” variant is especially an eye-candy. The camera island has a slight bump and a dual-tone finish which gives a distinct look. Inside, you’ll find a single 8MP camera. Upfront, there’s a 5MP selfie shooter under the traditional teardrop notch.

Narzo 50i has a pretty standard display for a budget phone. You’re looking at a 6.5″ IPS LCD screen with an HD resolution, and up to 400 nits of peak brightness. On the performance side of things, it borrows the Unisoc SC9863A chipset—which is quite popular among budget phones.

This has been paired with 2/4GB RAM and either 32 or 64GB of internal storage. Narzo 50i runs on Android 11-based Realme UI Go Edition. There’s a big 5000mAh battery inside that supports reverse charging as well. Regardless, Narzo 50i is pretty similar to the Realme C11 2021 below. So, if a trendier design is what you’re shopping for, this looks like a better option.

Summary list of best mobile phones under NPR 15000 in Nepal

Do you agree with our choice of best phones under NPR 15000 in Nepal or do you want to add something to the list? Have your say in the comments section.