Alpha Centauri is the closest star system to our solar system and is presumed to offer the highest possibility of discovering an extraterrestrial being. Nevertheless, with current technology, reaching there is next to impossible. However, scientists have devised a laser-powered sail that they believe will allow unmanned spacecraft to travel 24 trillion miles and visit Alpha Centauri within 20 years.

The Australian National University (ANU) has designed a laser-powered sail as part of an international effort to investigate the planets surrounding Alpha Centauri. Breakthrough Starshot project plans for the development of an ultra-lightweight spacecraft that will function as a light-sail. The sail should reach the triple star system 4.37 light-years away at an incredible pace.

While this distance sounds like a lot (which it is), Alpha Centauri is three times closer than the next closest Sun-like star system. Here, the laser propulsion system would propel the probes into orbit. Similarly, the lights that will power the sail will be released from the Earth’s surface. 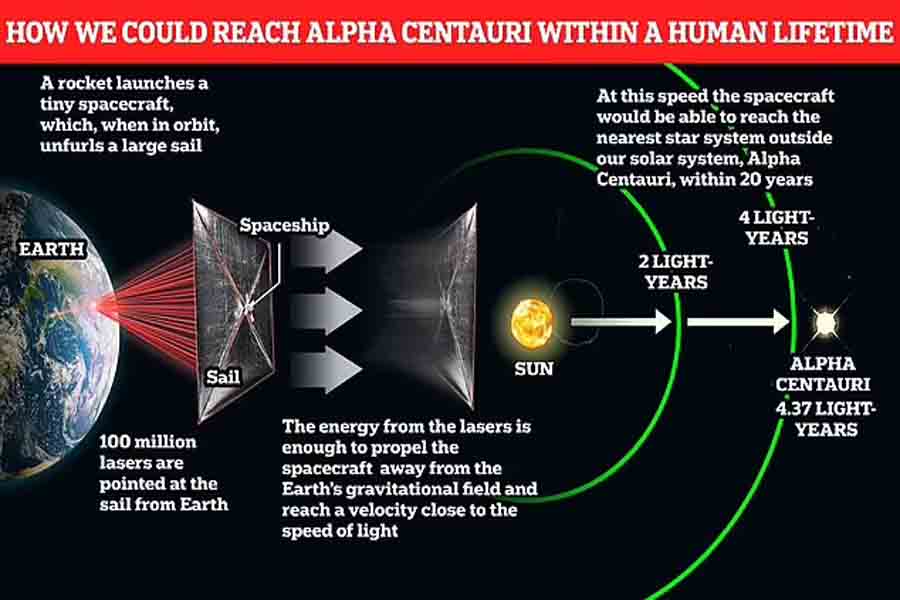 In the figure, we can see millions of laser lights striking at a point to illuminate the sail and push it onto its interstellar journey.

“To cover the vast distances between Alpha Centauri and our own solar system, we must think outside the box and forge a new way for interstellar space travel”, said Dr. Chathura Bandutunga, the study’s lead author.

The space of Alpha Centauri

Proxima Centauri is 4.2 light-years away from Earth and features two confirmed planets. The first one is a Jupiter-like gas giant and the next has a rocky world in the habitable zone known as Proxima Centauri b.

Australia’s Parkes radio telescope detected the signal in mid-2020. Meanwhile, the detected signals were not ascribed to any Earth-based or near-Earth human-created source. That means it’s certainly from an unknown source. Or, the signal is likely to have a natural explanation, but that hasn’t stopped alien-hunting scientists from paying more attention.

Once the sail begins its trip, it will travel for 20 years across the vacuum of space before arriving at its destination. It will record photos and scientific measures as it travels to its destination, which it will transmit back to Earth.

The potential stumbling point, though, is the continued use of lasers to control the sail. The Breakthrough Starshot program calculated that the necessary power would be roughly 100GW (GigaWatt). That is around 100 times the capacity of the biggest battery in the world. Similarly, to attain such great power, around 100 million lasers will be necessary. And of course, other potential dangers in the vacuum of space.

NASA announced in 2017 that they are contemplating a trip to Alpha Centauri. The crew wants to complete the mission in 2069, on the 100th anniversary of the Apollo 11 mission.

The only spacecraft to leave our solar system are Voyager 1 and Voyager 2. Because of its speedier trajectory, the former, which was launched 16 days after the latter, was the first to reach interstellar space in 2012. Six years later, the Voyager 1 spacecraft exited our solar system. But not before capturing Earth from a record distance of 3.7 billion miles away—which was so elegantly described by Carl Sagan as “Pale Blue Dot“.