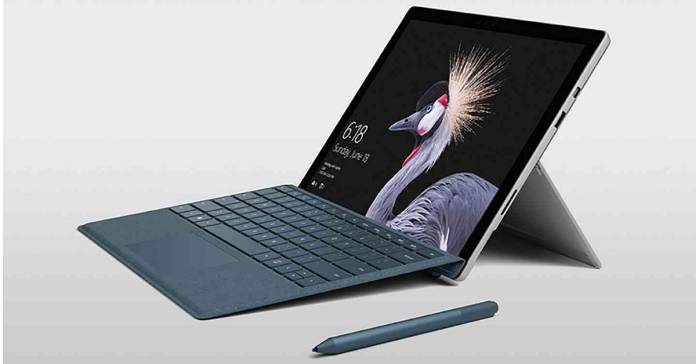 Are you in the market for a new portable ultralight laptop/ tablet? Well, you’re in luck cause Microsoft has just announced the refreshed version of the earlier Surface Pro 4. It’s not called Surface Pro 5 rather they are calling it the “New Microsoft Surface Pro”. The new Surface Pro may look the say as the Surface Pro 4 but make no mistake as there is a lot that is new for 2017.

The first this that you will notice with the all-new Surface Pro is the type cover. It gets Alcantara Type Cover which is the only exterior change to the laptop. On the other hand, there are about 800 changes made to the internals of the laptop. It begins with the seventh-generation Kaby Lake processor from Intel.

Microsoft has also improved on its battery. It now has a jaw-dropping battery life of 13.5 hours which is significantly better to its predecessor which was 8 hours. This is achieved through the more compatible Window 10 creator update, SSD integration to the motherboard and a slight increase in battery capacity. Also the all new Surface Pro comes with fanless passive cooling for the core m3 and i5 processor. Sadly for the i7, the fan has been integrated but Microsoft claims that it is very quite. For the artist in you:

Even though you only get the tablet out of the box, the new Surface Pro does gets gadgets such as the Surface Pen and the Surface Dial. It does have to be bought separately of course. The new Surface pen now comes with 4096 levels of pressure levels with tilt sensing. Also, the Surface pen is now snappier as Microsoft claims the reduce in lag time. Tilt will detect the angle of the pen to enable shading and better accuracy for inking effect. Microsoft has finally delivered for the creator that use the Surface pen for their creative work.

For the first time on the Surface Pro, Microsoft will also offer a model with LTE connectivity. The LTE version will support micro SIM and eSIM. Microsoft isn’t revealing exact pricing or a but it will be expensive than models without LTE support. The Release date for the Surface Pro with LTE is not been finalized but LTE versions should be available later this year.