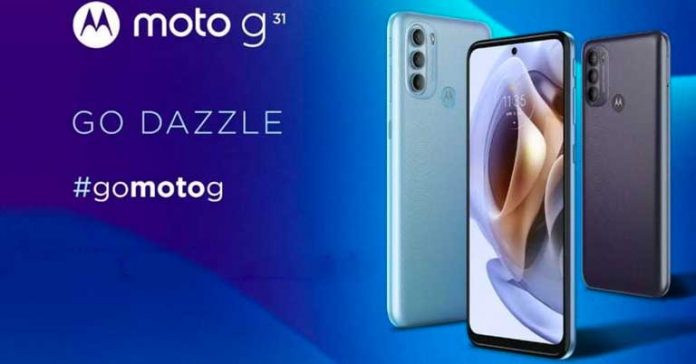 After multiple teasers, Motorola has finally launched the Moto G31 in Nepal. In this article, we will be specifically talking about the Moto G31, including its specs, features, official price, and availability in Nepal.

At its launch, Moto G31 will be the only OLED smartphone from the company in Nepal. The phone sports a 6.4-inch FHD+ “Max Vision” panel which refreshes at standard 60Hz. The screen has a center-aligned punch-hole cut-out for the front-facing camera.

As you would expect with a budget phone, the Moto G31 has an all-plastic design. It measures 8.55mm in thickness and weighs around 181 grams. It has a water-repellent body which is available in two colors: Baby Blue and Mineral Gray. The phone comes in 4GB and 6GB RAM variants with 32GB and 128GB of internal storage, respectively. The storage can be expanded further by slotting in a MicroSD card slot in the hybrid sim slot.

Over on the back, the Moto G31 flaunts a triple camera setup. The main highlight here is the 50MP primary camera that supports Quad Pixel technology to churn out more details under low light. It is accompanied by an 8MP ultrawide shooter that boasts a 118-degree Field of View. It even doubles as a depth sensor. Finally, we have a 2MP sensor for macro shots.

Over on the front, there is a 13MP selfie shooter encircled by the punch-hole. In terms of videos, all four cameras cap out at 1080p 30fps. The 5,000mAh battery of the Moto G31 boasts an impressive battery life of up to 36 hours on mixed usage. Charging speed is a little underwhelming as the phone only supports 10W charging. Motorola does provide a compatible charger in the box.

Moto G31 boots on Android 11-based My UX. It has a single down-firing speaker with Dolby Atmos optimization. It has a side-mounted fingerprint scanner for biometrics. The other neat feature of the phone is that it has NFC in addition to the usual Wi-Fi 5 and Bluetooth.

Motorola has finally launched the Moto G31 in Nepal with a price tag of Rs. 23,999 for the 4/128GB variant. It is currently available for pre-order in Daraz.