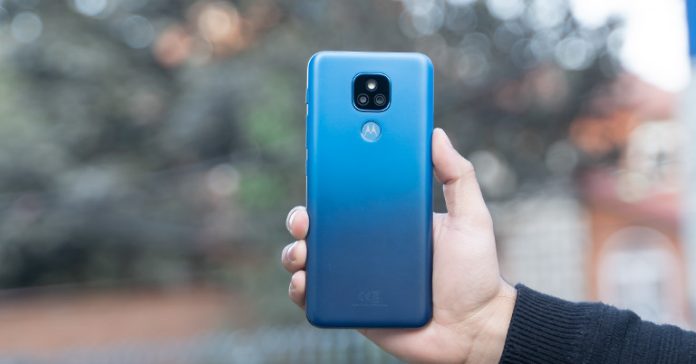 After years of absence, Motorola made a comeback in the Nepalese market in 2020. Between the two devices that were announced in the present launch, the Moto E7 Plus is for budget-conscious users. With the price tag of Rs. 16,590, it goes head-to-head against the Poco C3, which is available for a slightly cheaper price tag. But should you spend extra cash on the Moto E7 Plus when you’ll be spending less money on a similar alternative? Let’s find out in this detailed review of Moto E7 Plus.

As expected from a budget phone, Moto E7 Plus is made up of plastic. However, the device doesn’t look or feel cheap. I really like the matte finish on the back of the device. First, it makes the phone easier to hold, and second, it helps conceal any fingerprint marks and smudges. Still, it would have been better if it came with a protective clear case inside the box. The phone is available in two color options and I prefer the Misty Blue variant that I have with me to the Twilight Orange. The former has a pleasant gradient Blue design.

Likewise, the square camera module and the fingerprint scanner are both placed on the top half of the rear panel. The center alignment of the two makes the rear panel look symmetrical.

The phone does feel bulky, to be honest. I know the phone packs in a big 5,000mAh battery but so does the Poco C3. And the former is lighter—not by a lot, mind you. The flat sides on the E7 Plus look dull and don’t help when holding the phone. I really wished that Motorola had gone for curved sides like Poco C3.

In addition to the power button and volume rocker, the phone also has a dedicated button for Google Assistant. Interestingly, all the buttons are placed on the right side of the phone. The power button has a textured finish that helps it distinguish it from the rest. However, the assistant button is placed higher than what most people would like, or feel comfortable with. If I had to make a decision, I would have easily placed it on the opposite side.

I constantly mistook it for the volume increase button while using the phone in landscape orientation for games and videos. On the right side, there is a hybrid SIM slot that lets you use two sim cards or a single sim card and a microSD card. Finally, on the top, you get the 3.5mm headphone jack. There is a micro USB port, speaker grille, and microphone on the bottom of the phone. 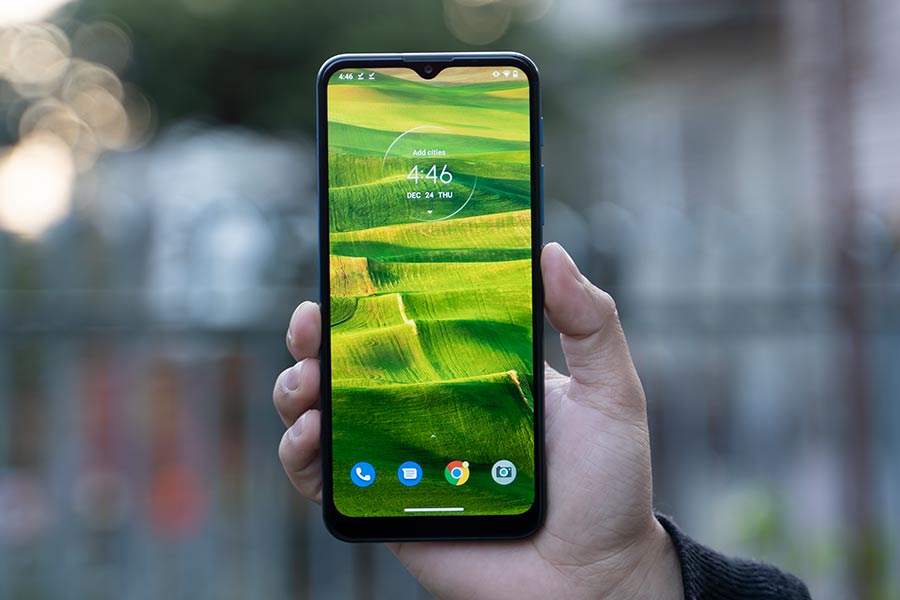 Getting to the display, Moto E7 Plus sports a 6.5-inch IPS TFT LCD screen with a waterdrop notch on the top to house the front-facing camera. The bezels around the screen are quite noticeable, especially the chin which is bigger than what we get in the Poco C3. Talking about the display quality, the phone sports an HD+ resolution of 1600 x 720 pixels and a pixel density of 269 PPI. This is typical of a phone in this price range. Because of this, the images on the display are not the sharpest.

At their default settings, I found the display on the E7 Plus more pleasing compared to that of Poco C3. The display on the Poco C3 is way too warm to my liking. But again, it does let you adjust the color temperature of the screen which is absent on the Moto E7 Plus. Similarly, E7 Plus’ display is more prone to scratches so getting a decent screen protector would be a smarter choice.

As with other Motorola smartphones, I found the “Peek Display” feature to be quite interesting. With this, you can interact with incoming notifications without going through the hassle of unlocking the phone. Just bump the phone a little to wake up the Peak Display screen. Here, you can open up the notification by dragging up the notification preview. You can then choose to reply, archive, or even ignore the notification.

Moving on to performance, the Moto E7 Plus is powered by Qualcomm’s 11nm Snapdragon 460 chipset, which is the successor to the Snapdragon 450. This SoC is paired with 4GB of RAM and 64GB of storage. With bloat-free UI on top, I didn’t experience any issue with day-to-day performance. The phone does take some time to open apps but that is to be expected from a budget phone. For instance, the app loading time is on par with that of Poco C3, if not faster. You can further improve it by enabling Adaptive AI performance. This feature speeds up the performance by using AI to predict the apps that you are most likely to open next.

The phone doesn’t have a gyroscope thus you won’t be able to play games that rely on it. I had a hard time adapting to PUBG Mobile without the gyroscope. Here, you can crank the graphics settings Balanced and frame rate to Medium. Except for some occasional stutters, the game was playable. For the best experience, I recommend playing with a High frame rate in Smooth graphics. By the way, you don’t get to play in that settings in the Poco C3. At the same settings, I found the gameplay in the two devices to be identical. However, the Snapdragon 460 is better for prolonged gaming as the G35 on the Poco C3 starts to heat pretty quickly.

I also tried playing some less demanding games like Clash Royale. As you’d expect, it was completely playable but I did notice some occasional lags while swiping across the game’s home screen.

Like I mentioned earlier, Moto E7 Plus comes with 64GB of internal storage which is what other phones are offering at the price segment. The unusual thing here is the inclusion of a hybrid sims-lot. You can’t use two sim cards and microSD card at the same time.

Coming to the cameras, the 48MP primary setup really stands out on the spec-sheet. There is hardly any phone providing one in the sub 20K range in the Nepalese market. To see if the 48MP camera is any better than other cameras in the price segment, we tested it against the Poco C3 which has a 13MP primary camera.

Though neither of the two phones has an ultra-wide lens, the primary camera on the Moto E7 Plus has a wider Field of View (FOV) compared to that of the Poco C3.

The shots taken by Moto E7 Plus have a better dynamic range. Similarly, the colors are also more natural here as the Poco C3 tends to saturate colors making them look darker.

In terms of portrait images, Moto E7 Plus takes better portrait shots as well. Though neither phone has perfect edge detection, the E7 Plus does it slightly better than the C3.

Also, you can even take portraits of objects with the E7 Plus. But it doesn’t work that well as it does with human subjects.

Jumping to the front camera, the Moto E7 Plus has an 8MP sensor whereas the Poco C3 comes with a 5MP lens.

As you can see from these samples, selfies from the E7 Plus are slightly smoothened. On the other hand, they are darker in the C3. I would still go with the E7 Plus because of the better background exposure.

There is also a dedicated Night Mode on the Moto E7 Plus, which is absent on the Poco C3. While it doesn’t improve the image quality drastically, it does add illuminance.

Thus, the output from the Night Mode turns out brighter than the normal mode.

The software has been one of the major highlights of Motorola phones these days. Like other Moto devices, this one comes with a near-stock Android experience. Because of this, it doesn’t have a heavy custom skin, bloatware, and the UI is ad-free as well.

You do get Facebook and other apps from Google preinstalled but most of them can be disabled anyway. Other than these is the Moto Action app. It’s a collection of all the tweaks that Motorola has done to the software. The app explains the basics of each feature in a fun way. Personally, I like the Peek Display, Fast Flashlight, and Personalize with Style features. 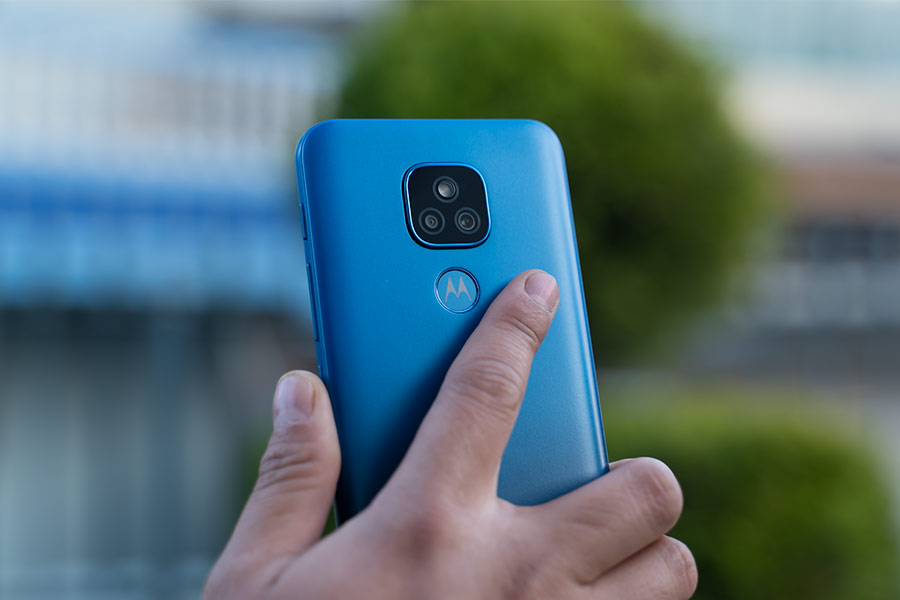 For biometrics, the phone boasts a rear-mounted fingerprint sensor, which is pretty accurate. However, the buffer between the fingerprint input and actual unlock is quite noticeable. You also have the face unlock feature that works well during the day but drops down in terms of consistency under low-light conditions. At the time of writing this review, our unit of the Moto E7 Plus is on the October security patch. 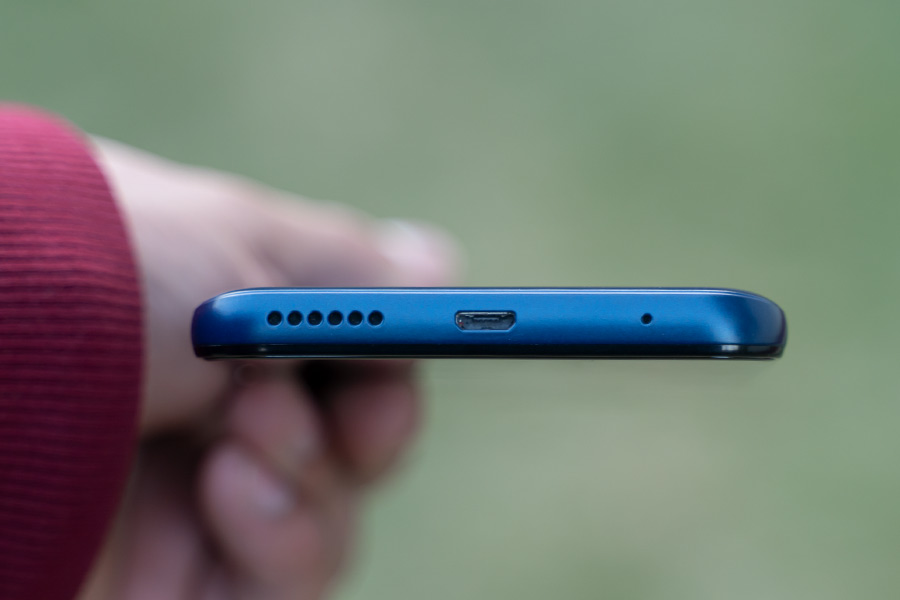 In terms of audio quality, the down-firing speakers are average at best. Turn the volume all the way up and you will hear distortions. Bring it down a little and the output is hardly audible. At times, I wished the call were a little louder. Other than that, I had no problem with making and receiving calls.

A bigger battery is almost a norm on budget phones these days. You get a massive 5,000mAh battery in the Moto E7 Plus, which adds to the phone’s heft as I mentioned earlier. In a normal usage scenario, you can easily expect a battery life of over a day. The real problem starts when you drain the battery. The phone comes with a 10W micro USB charger and there is no support for fast charging. During the review, I constantly recorded that the Moto E7 Plus takes around 3 hours and 15 minutes to go from 0 to 100%.

Moto E7 Plus is Motorola’s first budget device for the Nepalese audience in years and it is a decent one as well. Unlike the Poco C3, it is powered by an efficient Snapdragon processor and has a near-stock Android experience to complement it. Similarly, the 48MP camera cannot compete with its namesake on more expensive devices but is among the best in this price range. The display and battery life are not better than what other budget contenders are providing but will do just fine on normal usage.

If I had to choose between the Poco C3 and Moto E7 Plus I would definitely go with the latter. The Moto E7 Plus is a better device altogether. The only deal-breakers (or rather, minor complaints) that I have are the hybrid SIM slot and slow charging. But, I could totally see myself living with it.