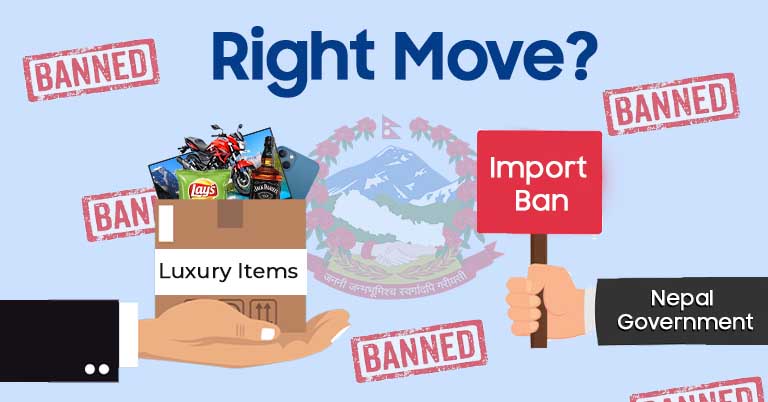 Earlier this month, Nepal Rastra Bank instructed commercial banks to stop issuing Letter of Credit (LC) for the import of non-essential goods. The motive behind the move was to prevent further widening of the country’s trade deficit. Today, the government has imposed a ban on the import of ten types of luxury goods.

Nepal’s Ministry of Industry, Commerce, and Supplies has banned the import of “luxury” items into the country till mid-July. Nepal’s foreign exchange has dropped significantly over the past few years, and the government wishes to prevent it from dropping further with this import ban.

Though the import ban was only made official today, commercial banks had already stopped issuing Letter of Credit for imports of non-essential goods weeks prior. Likewise, the government is also keen on controlling the outflow of money via illegal crypto and hundi transactions.

The following is the list of items banned for import following today’s decision:

However, this ban does not apply to products imported by diplomatic missions for their personal usage. Likewise, the government has also assured importers that products that have already completed all the import procedures via bands before April 26 will also remain unaffected by this decision.

It is clear by now that Nepal’s economy is not the strongest. Increasing imports coupled with factors such as declining remittance have contributed to this situation. In this regard, the decision to ban imports of non-essential and luxury items is a welcome change. Some may even argue that it should have been done earlier.

For instance, even if smartphones have been an integral part of our daily life. One simply doesn’t need to have the latest flagships. Good phones have gotten cheaper over the years and can a get decent all-rounders even in the sub-30K market today.

However, this alone won’t fix Nepal’s economic woes. It is high time that the country started focusing on increasing production.