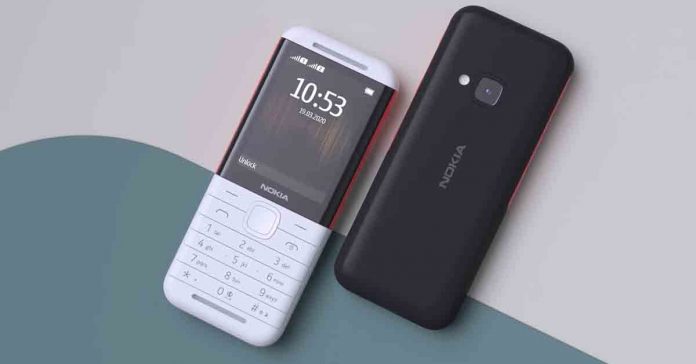 HMD Global has the license to launch phones under the Nokia branding. It has brought out a significant number of new Nokia phones. In addition to that, it has also been successful in cashing in the nostalgic factor by launching iconic devices from the past and tweaking in some modern features. Recently, Nokia resurrected it’s 13 year old Nokia 5530 Xpress Music phone to the Nokia 5310 (2020). And finally, it’s here in Nepal. Let’s find out the specs, features, price, and availability of Nokia 5310 (2020) in Nepal.

As mentioned earlier, the new Nokia 5310 is a modern take on the classic Nokia 5310 Xpress Music. The latter was launched back in 2007. Because of its dedicated key for playback control, it was a popular device among music lovers. The phone features a 2.4-inch TFT panel with a resolution of 240 x 320 pixels. The panel covers a large chunk of space on the front of the device and is curved at the sides. We also have a large physical keypad on the bottom half of the phone.

Considering that it’s a bar phone, there isn’t much to talk about the performance of the device. Under the hood, it packs MediaTek’s MT6260A. For memory, it has 8MB of RAM and 16MB of storage. The latter can be expanded up to 32GB using a microSD card. It runs on Nokia Series 30+ operating system. It has a 0.3MP VGA camera on the back along with an LED flash.

The phone comes with dedicated keys on the side of the device that lets the user take control of the music player. It also features dual speakers for better music experience. The new Nokia 5310 supports wireless FM, thanks to its internal antenna. It also comes with support for 3GP video codec. Nokia 5310 (2020) features a battery a 1,200mAh battery. The company claims it offers up to 30 days of standby time. For connectivity, it supports Bluetooth 3.0. As there is no Wi-Fi, users will have to use Bluetooth to send and receive music files. It can also be used to connect wireless headphones. As the device doesn’t even support 3G network band, you need to rely on slower 2G internet.

The official price of the Nokia 5310 (2020) in Nepal is NPR. 5,499. You can purchase the phone from different mobile retail outlets all over Nepal.

Check out our review of the budget Nokia 2.3!