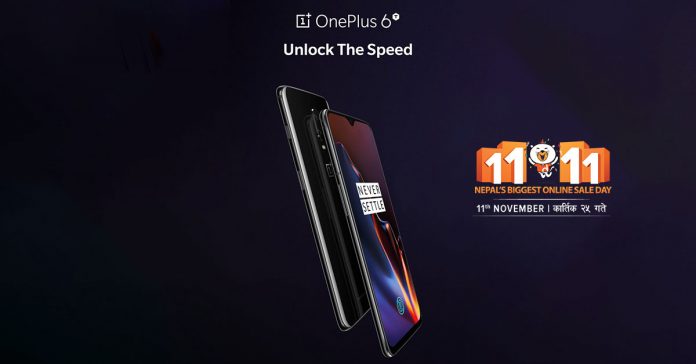 The OnePlus 6T is creating quite a buzz around the world right now. After a couple of weeks of its international launch, the Oneplus 6T launched in Nepal. It is sold exclusively on Daraz starting November 11, which is its 11.11 Sales Day. However, you can also buy the phone later from retail shops and Oliz store, albeit at a higher price tag.

The OnePlus 6T is a flagship smartphone, and it comes with all of the 2018’s top specifications. The 6T sports a tall 6.41-inch Full HD+ Optic AMOLED display that has the minimal Waterdrop notch on the top. This display is donned by the Corning Gorilla Glass 6 with its previous iteration, the Gorilla Glass 5, covering its back. The OnePlus 6T features the latest flagship CPU from Qualcomm as the Snapdragon 845 powers up the phone aided by Adreno 630 GPU and 6 GB of RAM. It comes with 128 GB of internal memory which is definitely good to see as there is a lack of a microSD card slot on the device. The OnePlus 6T runs on the latest and greatest from Google, i.e. Android v9.0 Pie. OnePlus has cashed in a lot on the software side of this device, as it has a completely revamped OxygenOS along with a lot of customizations.

Oneplus 6T Camera: Is it any Good?

Camera wise, the OnePlus 6T comes with the same camera setup that the OnePlus 6 possesses. So, you must already know the megapixel count which stands at 16-megapixel and 20-megapixel. The second lens helps to set proper depth, and the wider aperture of f/1.7 on both the lenses capture in more light in the low-light environment.

In terms of battery, the OnePlus 6T features the biggest battery on any OnePlus smartphone. There is a 3,700 mAh battery that coupled with the Full HD display, will give you a day of battery life. OnePlus’ trademark 20W fast charging technology is also embedded on the phone.

The OnePlus 6T has ditched the headphone jack for which it has been receiving a lot of hate. According to the company, this step was undertaken to add in more battery and include the in-display fingerprint scanner. The scanner is placed under the display and it takes only 0.34 second to unlock the phone, OnePlus claims.

Only the 6GB RAM, 128GB storage of the Oneplus 6T is available in Nepal. It carries a price of Rs. 70,000 and can be bought from OlizStore.