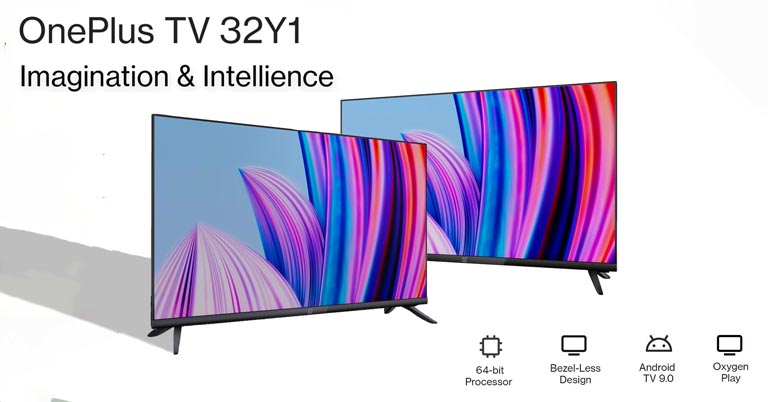 OnePlus Nepal has just added another entry in its Y-series of affordable TVs. The newly launched OnePlus TV 32Y1 has a 32-inch display and is a cheaper alternative to the existing 43-inch model. Here, we will be discussing the key specifications and features of the OnePlus TV 32Y1, along with its official price in Nepal.

It also supports features like anti-aliasing, Noise Reduction, Dynamic Contrast, and Color Space Mapping. The TV weighs 3.5kg without the stand and 3.56kg with it. It can be mounted on the wall as well but for that users will have to buy a wall mount separately.

OnePlus has not explicitly listed the chipset used on the 32Y1, but we believe it’s the same 64-bit processor used in the 43Y1. Similarly, it only has 1GB of RAM and 8GB of internal storage. 32Y1 still ships with Android 9 while newer TVs from the competition have moved on to the Google TV standard. Anyway, its dual speaker setup supports Dolby Audio and results in a total output of 20W.

OnePlus TV 32Y1 comes with Amazon Prime Video, Netflix, YouTube, and Google Play Store pre-installed. Google Assistant is the default voice assistant here but users have the option to switch to Alexa too. Similarly, it also supports Chromecast to cast your smartphone’s content on the bigger screen. There is OnePlus Connect that allows users to control the TV using their smartphone as well.

OnePlus TV 32Y1 can connect wirelessly using Wi-Fi b/g/n and Bluetooth 5.0. There are two USB 2.0, one audio output, one 3-in-1 AV input, two HDMI, one RF, and one Ethernet port in terms of wired connections.

The official MRP (Maximum Retail Price) of the OnePlus TV 32Y1 in Nepal is Rs. 49,990. However, you can get it for as low as Rs. 39,990 after discounts.You can purchase it from OnePlus’ authorized stores across Nepal.