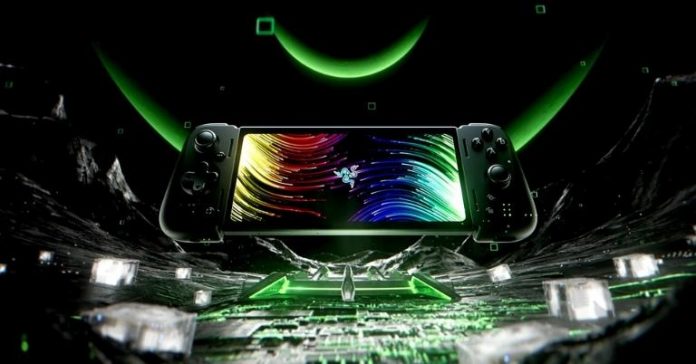 Razer announced the Razer Edge 5G at the RazerCon 2022 today. This 5G-enabled gaming handheld is developed in partnership with Qualcomm and Verizon. In this article, we will go through the specs, features, availability, and expected price of the Razer Edge 5G in Nepal.

The Razer Edge 5G is a handheld gaming console capable of running AAA games via cloud streaming services such as NVIDIA GeForce Now and Xbox Cloud Gaming. Users will also be able to play Android titles like Fortnite and Rocket League Sideswipe through the pre-installed Epic Games launcher.

Additionally, the Razer Edge also supports remote play through which gamers can access PC libraries via Steam Link, Moonlight, Parsec, and Xbox. Additionally, Razer has also included its Nexus app which acts as a multifunctional dashboard for Android games.

The Razer Edge has a length of 260mm and is 85mm wide. Both the standard and 5G version measure 11mm thick and weigh 264 grams. With the included Razer Kishi V2 Pro controller, the weight adds up to 401 grams. The Razer Edge is fitted with a 6.8-inch AMOLED FHD+ screen with a resolution of 2400×1080 pixels. It has a fast 144Hz refresh rate which is great for gaming.

The Razer Edge 5G is powered by Qualcomm’s Snapdragon G3x Gen 1 chipset paired with 8GB of LPDDR5 RAM and 128GB of UFS 3.1 storage. The Razer Edge supports storage expansion of up to 2TB via microSD. The device runs on Android 12 with Razer’s custom skin on top out of the box.

The Razer Edge 5G also has a 5MP front-facing camera that can record 1080p videos at 60fps. For audio, it has 2-way speakers and two digital microphones. Additionally, the controller offers a 3.5mm headphone jack. The console is powered by a 5000mAh battery and the controller connects to the tablet via Type-C.

The standard WI-Fi version of the Razer Edge costs USD 399 in the United States. The company also offers a Founders Edition variant that comes with Razer Hammerhead TWS for USD 499. We expect the Razer Edge to retail for around NPR 57,999 if it launches in Nepal.

Currently available for reservations, all the Edge variants will go on sale starting January 2023. While the price of the standard variant is known, Razer is yet to unveil the price of the 5G-enabled Razer Edge.