Good design, good cameras, and power performance! And of course, the price! Realme exactly knows what they should focus on. So on the specs-sheet, the phone looks really promising. But does that hold true on to real-life use? We tried to answer that in this Realme 5 Pro review.

Design-wise, the only concern is the polycarbonate back, that too in terms of durability. Otherwise, this is pretty good design. 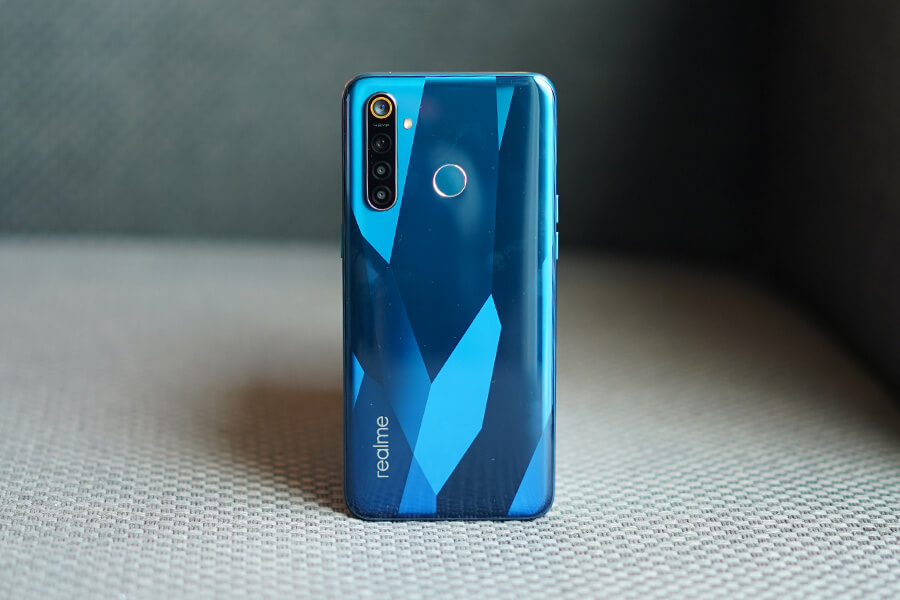 These diamond-shaped patterns glow in light and darker shade when tilted, making the phone look very appealing. On hands too, it feels okay, it’s nice and considerably hefty. Now don’t expect anything of the Realme X kind, that phone has a different level good design. But as I said, by looks, I love this phone. This, I think is one of the best-looking designs for the price.

But the good looks come for a price. Smudges are inevitable on it and no matter how much you clean, it keeps coming back, so I would advise you to put a case on it. By the way, you get the case inside of the box itself. It should last you for two months or so.

Aesthetically, everything seems good except for tactility of the buttons. And this is one of the dark sides of having a phone built entirely of plastic. Down below, you see a USB-C port, a single firing bottom speaker and thankfully a headphone jack! The output from the headphone jack and the speakers are well unimpressive, like with most of the midrange phones.

But something unique that the company has provided is that the phone is splash resistant. I talked about this in the Realme 5 review as well. This feature is nothing like IP ratings but the company says that the openings of the phone have been sealed with rubber gaskets to prevent your phone from water or moisture damage to some extent. So, maybe accidental coffee spills will have fewer impacts now.

On the display front, it’s the same as the Realme 3 Pro, a 6.3- inches IPS LCD screen with 19.5:9 aspect ratio. It’s protected with Gorilla Glass 3+, so it should be resistant to minor drops and impacts. I haven’t tried dropping it though. 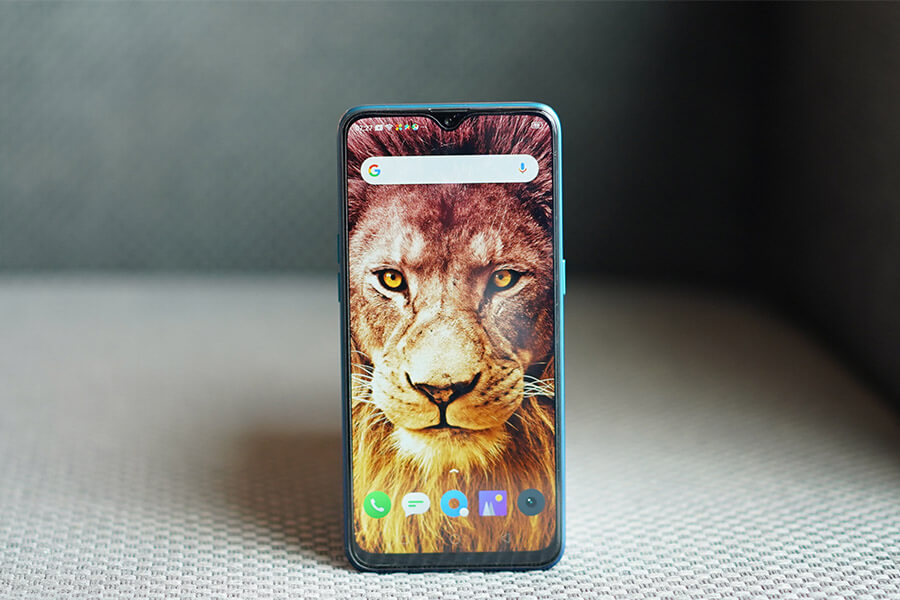 The colors on the screen look good and vibrant. Of course, not the AMOLED level, but not bad either. Brightness too is sufficient indoors and okay outdoors. There are various battery saver modes you can use to limit the brightness levels.

The display is the house for a mini-drop notch that carries the selfie camera. It’s small and not obtrusive at all. Also, there is a color temperature slider inside the display settings that lets you change the screen temperature as per your liking. And the screen offers good legibility even while viewing the contents outdoors. 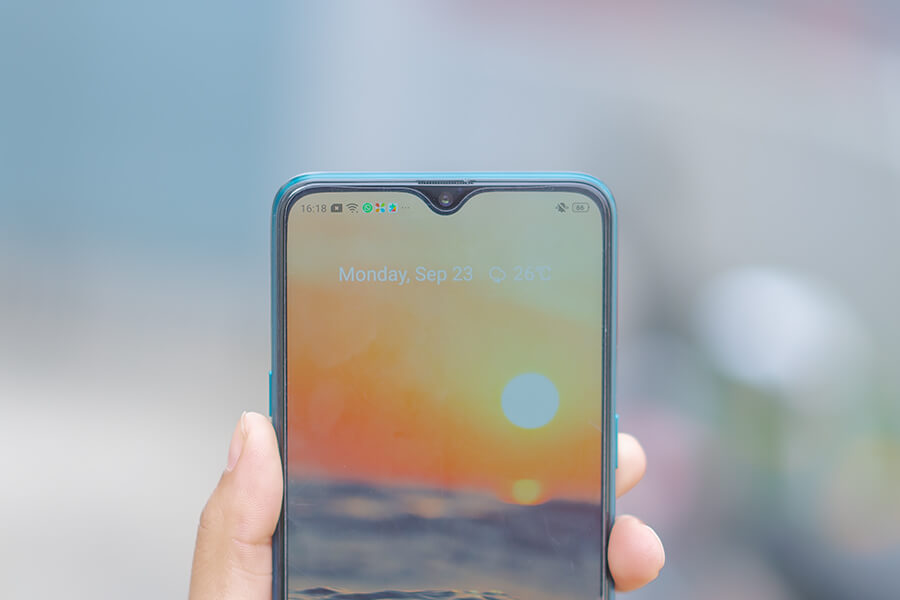 So, overall, if we think about it, this display is familiar to us, there are not many changes from the Realme 3 pro.

The Realme 5 Pro runs on Snapdragon 712. Which is essentially the same as the Snapdragon 710 except for slightly higher clock speed on the high-performance cores. In terms of GPU, there has been no change from the Snapdragon 710, it’s still the Adreno 616 which performs just like what we saw on the Realme X.

But the 5 Pro has shown significant improvement from the 3 Pro in case of AnTuTu and Geekbench scores.

On everyday use, I found the performance to be smooth. Games ran very well, I played PUBG on high settings, almost stutter-free. So, this is a good gaming phone, I can vouch for that.

Even on normal use, whatever game or app you run, it’s going to run very well. Even on the heating part, you are not going to experience much, there’s normal rise in temperature while intense gaming, which is nothing so overwhelming.

The Realme 5 Pro comes with Android Pie with its custom Color OS 6 on top. This combination is what we have already seen on other Realme Phones, so the 5 pro offers just the same experience. I say this in all the Realme Reviews that Color OS is not so great and it still holds true for me. However, I really wish the rumors of them coming up with their own UI comes is true because that would really be amazing! The software, though not well defined, gives you a lot of customization options for navigation and other functions. There is also something called game space that basically lets you minimize interruptions while playing games. You don’t get the ‘dark mode’ like the Realme X, which of course is because of the LCD screen. There is a night shield feature though if you wish to protect your eyes from harmful Blue light.

Now let’s talk cameras. And this is the first time the company has included a quad camera setup. And it’s hilarious somehow that Realme did not even think of triple camera setup, they jumped right from Dual to Quad cameras. 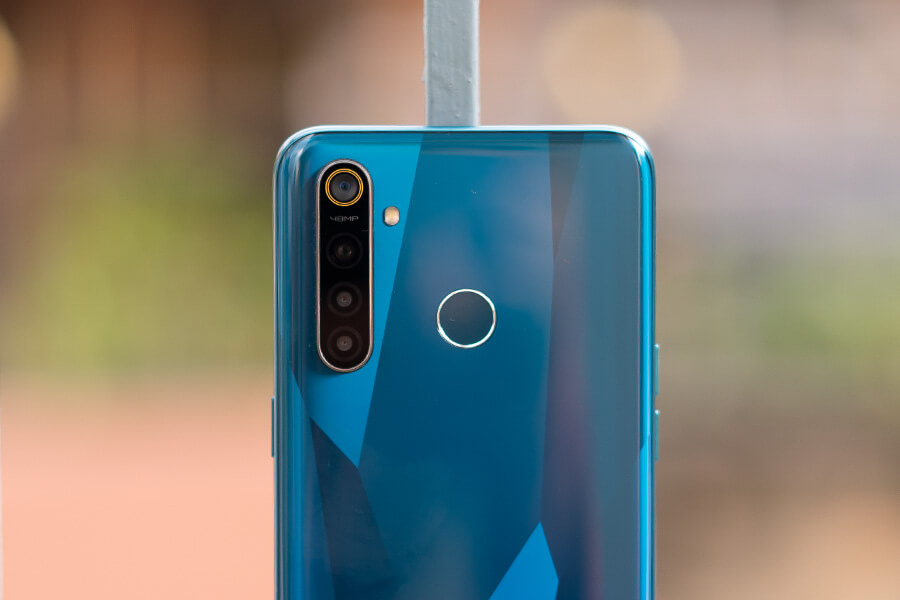 Anyways, moving on to the camera specifications, the primary is a 48 MP Quad Bayer sensor, then we have an 8 MP ultra-wide-angle lens, then comes the 2 MP depth sensor and the 2 MP macro lens.

Now, first, let’s go for the primary camera. And this is the same sensor that we saw on the Realme X, the infamous and universally used, SONY IMX 586 sensor.

Alright, first let me talk about the images from the 5 Pro. I see good sharpness in the images, the colors look nice and punchy, yet not over-saturated. In case you want more vibrancy, you can turn on the Chroma Boost option. There is a 48 MP option for clicking pictures but you won’t find much differences upon first glance with the 12 MP images. Just upon close inspection, the 12 MP look sharper, thanks to pixel binning.

While talking about primary images, I compared the images from the Realme X and the 5 Pro because both phone’s chipsets use the same ISP and the same sensor. To make the comparison fair, I tested the images in a different color-accurate screen because well, one is an LCD and another is an AMOLED panel.

And my test showed that apart from the slightest of color changes, there’s actually not much differences. Realme X’s color looks slightly more saturated while the 5 pro’s images had a more subtle color to them. In portrait images too, only the skin tone is a little bit different and it looks like the 5 Pro has slightly better edge detection, otherwise, everything is almost the same. Same goes with selfies, both portrait, and normal selfies.

Now. Let’s move on to wide-angle images. As already mentioned, this is the first time we have seen a wide-angle lens on a Realme phone and the implementation is not bad actually. The primary and wide-angle images don’t suffer much color shifting, although slightly lesser details on the wide-angle photos are there as expected but nothing worrying.

The third depth sensor is quite good too, surprisingly good for a 2 MP sensor. The edge detection is okay, it slightly takes a hit in the hairlines, otherwise, it looks good. The blur too looks pleasing. So, I quite liked the portrait images form the 5 Pro.

Portrait Images from Realme 5 Pro
1 of 8

The fourth Macro images, well, are not as impressive as I thought it would be. Actually, if you go near a subject and click from the primary camera, the images come out better than clicking pictures through the Macro lens. So, I found it to be rather gimmicky. Maybe the company can provide a better Macro lens in their future offerings.

Nighttime images are well a lot grainy. But there is a nightscape feature to compensate for it. With the nightscape feature, it improves the lighting and balance of exposure in images. It’s nothing extraordinary, but it’s not bad either!

The battery capacity ion the Realme 5 Pro is similar to the Realme 3 Pro with both having a 4,045 mAh battery. The battery life on the phone is impressive, it can get you through a day easily with some battery left at the end. If you are moderate to light user, the battery is going to last even longer.

With the 5 Pro, you get a fast charger inside the box, a 20 Watt adapter that supports VOOC charge 3.0. You can get the device fully charged in about 80-85 minutes, which is impressive.

So, yes, like all Realme phones, the 5 pro is also a very good value for money device. Here, we have some welcome additions like a wide-angle lens and USB Type-C port, which weren’t there before and these have made the phone very competitive. But now, I think it’s time for Realme to step up their game, not just in specs and prices but you know start doing something new, become first movers. Honestly, in these few months, I have reviewed so many Realme phones all slightly different from one other, all are the best value for money phones and that’s it. The only unique thing is we get so and so specs in a more affordable price.

But don’t get me wrong, I just mean there is nothing innovative going on. And as good as the company is doing, I think focusing on new things will help the brand even more!