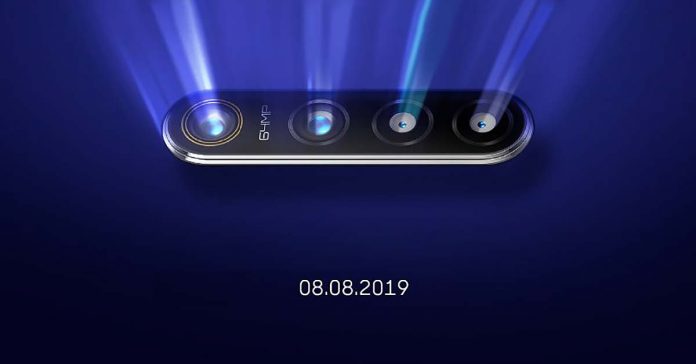 Most of us had seen the Redmi VP teasing about a 64 MP camera phone. Well, it seems that Realme is already ahead in that race! After all, its own 64 MP camera phone launching on August 8. The phone will have a quad-camera setup and will launch at an event in India. This launch will make Realme the world’s first smartphone makers to launch a 64MP camera phone.

A 64 MP camera along with a quad-camera setup makes this phone an interesting one to look out for. Its competition with Redmi is neck-to-neck. However, this smartphone will probably propel them to another level. The company previously released posters teasing the presence of a quad-camera setup. The addition of extra rear cameras will make this set-to-launch device a first in Realme’s range of smartphones to have more than two cameras.

A photo shot from the 64MP AI Quad Camera was shared by the company’s CEO last month. And my-oh-my, does it have details! Back then the company was quick to announce the mysterious phone as the “new premium killer”. Nearing the release date, the phone still remains a mystery. All that is known is that the device will be equipped with Samsung’s 64MP GW1 largest 1/1.72 sensor. In addition to that, the pixel size too is of 1.6 micron-and that’s BIG. Other than that, not much information is available about the device. Will it be a new addition to the Realme 4 series? Or will it give rise to another premium range of phones by Realme? It could very well be that all this is a marketing gimmick and all one gets as a quad-camera setup is a bunch of 2MP lens for sensor and macro. No one can really confirm anything at this point. But without actually seeing the device itself, all of them are just speculations. Well, the good thing is that there’s only one day left for the launch and we’ll soon find out how the device actually performs.