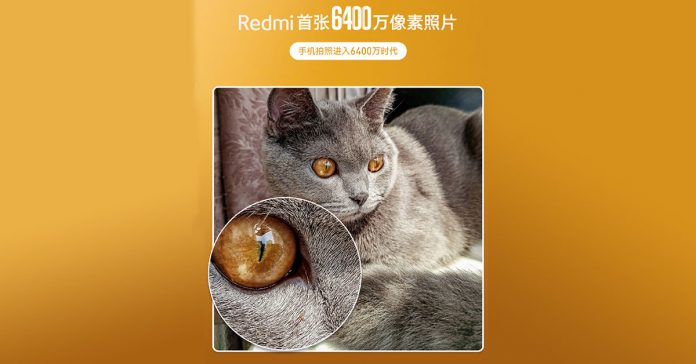 Xiaomi backed Redmi, is ushering the entire phone photography scenario into the next realm. With the first-ever smartphone with a 64MP camera, Redmi is certainly is upping the stakes! And this comes after their another flagship-killer device, the Redmi K20 Pro! So, Redmi, certainly, is on its way somewhere…

Historically, any Redmi phone launch precedes tons of leaks and teasers; and it appears the brand has just kick-started the 64MP Redmi phone teasers. The Chinese firm first revealed that it had such a device in works recently. And now, we have some solid information about it. Redmi recently released a teaser poster that reveals its Quad-camera setup. Of the four cameras, the main camera will be a 64 MP sensor. Sadly, no more details were shared about the camera, except that it will be the Samsung ISOCELL Bright GW1 64MP sensor. Of course, the company didn’t reveal the sensor officially. It is only in rumors.

But what the post revealed was that a single image will be of 9248 x 6936 pixels in resolution! That’s around 20MB in size! To add to this, the resolution could also go well above 8K resolution, making it the highest for any smartphone ever. They also released a camera sample as well. The sensor comes with pixel-merging Tetracell technology and Remosaic Algorithm; offering 16MP images in a low-light environment. This algorithm merges four pixels to work as one to increase light sensitivity.

The exact name or even render of the camera isn’t out in the open yet. However, Redmi has asked the fans to guess the likely name of the upcoming device. The company will be giving away the Mi Band 4 NFC Version to the first 10 winners.

However, we have yet to see if it is just a marketing gimmick, or will the phone really be as promised. But, the company certainly has the fans anticipating the phone. Let’s hope we get more leaks and information about the camera as well as the phone in the near future. Till then, all we can do is guess the probable name for the phone.