In this article, I will share my early impression of the newly launched Redmi Note 11 Pro. The smartphone is launching soon here in the South Asian market starting with India—and it will be followed by other markets shortly. If you recall, last year’s Note 10 Pro was an incredible all-rounder phone, probably even the midrange phone of the year. And naturally, the expectation from this year’s Note 11 Pro is quite high!

By the way, Xiaomi has released 2 variants of the phone so far. One is the 4G variant with a modest Helio G96 chipset while the 5G-ready model comes with Snapdragon 695. Besides this, the rest of the specs are pretty identical on these phones. I, for one, have been using the 4G variant for a couple of days alongside the Poco X4 Pro, which is technically the 5G variant of the Note 11 Pro.

If you compare this phone with last year’s Note 10 Pro Max—features by features—the Note 11 Pro might seem a little underwhelming and not much of an upgrade. But after using it for a couple of days, I have found a bunch of major quality of life improvements here. 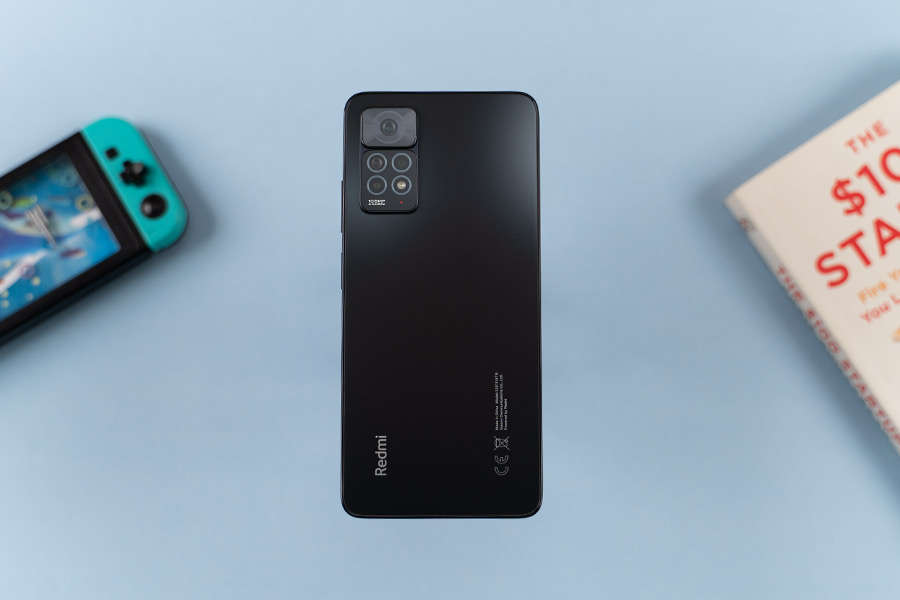 First off, I think this design looks relatively modern and more robust than its predecessor. It has this flat design language with sharp edges that looks pretty similar to the more expensive Xiaomi 11i Hypercharge.

The back also has gorilla glass protection while it’s not glossy too—just the way I like it. As a result, fingerprints and smudges are much less prominent here. It retains the right amount of heft and isn’t too heavy or too light as well.

So, design-wise, I see the Note 11 Pro as a great quality of life upgrade and I think most of you will like what Xiaomi has done on this front.

In terms of port selection, it doesn’t skip on the 3.5mm headphone jack, an IR blaster, or stereo speakers either. Its audio output gets quite loud, to be honest. And while it obviously struggles in terms of low frequencies, it’s still good enough for watching movies and listening to songs.

Likewise, the display is another area where the company has fine-tuned it over last year’s Note 10 Pro. On paper, their 6.7-inch Full HD AMOLED screen with a 120Hz refresh rate sounds identical, but the Note 11 Pro brings a brighter screen: 700 nits vs 450 nits. It can still reach up to 1200 nits under HDR contents though. Plus, it is also more responsive now, since Xiaomi has bumped the touch response rate from 180Hz to 360Hz. With this, I could instantly notice just how responsive the touch is here, which feels like something you’d find on a more expensive mid-range phone.

Not only that, it seems that the company has even optimized the fluidity of the 120Hz refresh rate. Last year’s Note 10 Pro was plagued with a lot of micro stutters and jitters. But this time around, I haven’t faced such issues yet.

Then again, Note 11 Pro’s overall performance isn’t much of an upgrade over its predecessor—especially the 4G variant. In all fairness, the Helio G96 chipset inside this phone is perfectly fine for your day-to-day tasks as I didn’t notice any lags or even a hint of sluggishness here. Apps open up quick enough and the multitasking experience has been decent too.

But, the G96 doesn’t deliver the most stable experience or the highest fps numbers if you play a lot of games. Here, PUBG mobile can only hit Smooth graphics and Ultra-frame rates, which is strictly average gaming performance. I’ll definitely be testing out more games for the full review but even now, I can confidently recommend you get the 5G variant if gaming’s a priority for you. On top of faster performance, it is well… 5G compatible as well.

Sadly, both the 4G and 5G models of the Redmi Note 11 Pro boot on last year’s Android 11 out of the box. It does bring the latest MIUI 13, but Android 11 in 2022 is a bit concerning on a mid-range phone like this if you ask me. And that’s because, unlike flagship or semi-flagship phones, they don’t have the luxury of getting 3 or 4 years of updates. Even if Xiaomi says; “hey, this phone will receive 2 years of OS upgrades”, the reality is that it’s only going to be updated up to Android 13.

Anyway, there’s a quad-camera setup at the back with a 108MP primary, an 8MP ultra-wide, and 2MP depth and macro lenses. Funnily enough, the 5G variant skips a 2MP depth sensor and comes with a triple camera setup instead.

During my initial tests, I am not that impressed with the photos that I have captured so far, to be honest. Still, I do think its color optimization is slightly better as compared to last year’s Note 10 Pro.

Here, the photos aren’t that oversaturated—neither are they contrast heavy. It can take some good images from the main as well as the selfie camera under good lighting conditions. But I still think that this camera—especially the 108MP primary lens—is behind what Samsung or even Realme is offering at this price segment.

Plus, I am pretty surprised to see the lack of 4K as well as 60fps recording option here—both of which were present on the Redmi Note 10 Pro. As things stand, you can only record videos in 1080p 30fps on this phone. The Helio G96 does support 4K 30fps recording but I think since Snapdragon 695 on the more expensive 5G variant maxes out at 1080p videos, Xiaomi has hesitated on enabling the 4K option here.

Getting to the battery, it’s the same 5000mAh cell as last year. And I’ve managed to get similar endurance with it—which is around 5 hours of onscreen time. Not that great, but still good enough considering this 5-hour SOT is under heavy usage that includes gaming for an hour or so, taking photos and videos, and watching movies as well. So, if you are a comparatively moderate class of users, it should easily provide a day worth of usage.

Moreover, charging up the phone is pretty fast with the provided 67W brick. It only takes 30 minutes to go from 0 to 75%, while a full charge takes less than 50 minutes.

So, as I mentioned at the beginning, the Redmi Note 11 Pro is all about the quality of life improvements. It’s like what Apple did going from iPhone 12 to the iPhone 13. And Xiaomi’s philosophy here is basically “if it ain’t broke, don’t fix it”. On top of that, they have definitely offered a better design, a better display, superior camera optimization, as well as faster charging speed this time around.