Home Reviews Samsung Galaxy A30 Review – A breath of Fresh Air for Samsung! 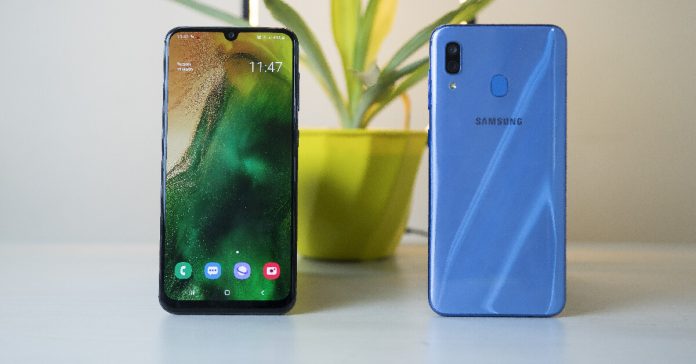 With Samsung refreshing its budget and mid-range lineups, the Galaxy A30 and A50 are the first to surface. And you’ll immediately notice that these phones are a breath of fresh air for Samsung. Today, we’ll be looking at the Galaxy A30 closely. And see if this low-tier mid-range phone can keep up with the cut-throat competition that surrounds it.

While the design of the phone is not something we haven’t seen before, it is new for Samsung. But I’ll tell you what is the first of its kind – its “Glastic” body! That is the construction of plastic and glass molded together. And it’s not as slippery as glass but is as durable as plastic. So, you get the best of both worlds. But it is, however, a fingerprint magnet. The phone is large but has curved edges and tapered sides. So, it sits comfortably in your hand. It’s also not bulky and seems a bit lightweight, but is sturdy enough. The rear-mounted fingerprint sensor is also at the right spot and is fairly easy to reach. By the looks of it, it appears as if Samsung put quite a bit of thought on this one. It looks cool, and is something you can show-off! Only those who don’t like such bigass phones might not like it, but for others, it is very likable.

The display on it is a joy to use! It’s an AMOLED panel, so, not something you’ll find in others for the price. That already gives it an advantage over the competition. So, I think it’s safe to say that this is the best display around for the price category.

Its large 6.4” panel with Full HD+ resolution makes for a good viewing experience. It’s sharp, colors are punchy and vibrant, and there is not much you can complain about. There’s also ample brightness and is easy to operate outdoors under bright sunlight as well. The notch is small, and U-shaped. Samsung dubs this the Infinity-U, and it looks…a bit odd, to be honest. Notches aren’t my thing, but those V-shaped notches look, better than the U-shaped ones. There’s a minimal amount of bezels around the sides, but there is a chin though, which, frankly looks disturbing.

One thing I’d like to mention is that the night mode, paired with AMOLED technology should provide more battery life. But, more than that, what it gives you, is a more immersive user experience with more depth! Everything is inky black, and that makes it so much better. 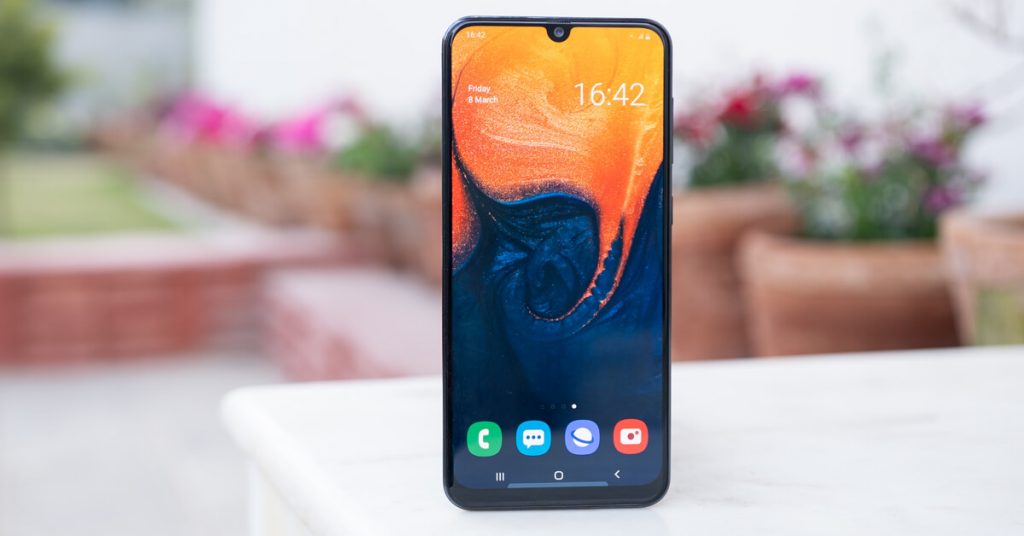 Plus, if you’re not a fan of Samsung’s color calibration, they also give you a bunch of modes to suit your needs. So, overall, a display that’ll beat the competition easily.

As for the camera, there are dual cameras at the back – a 16 MP primary and a 5 MP ultra-wide lens. And because this is a Samsung device, I had quite the expectations from this one. 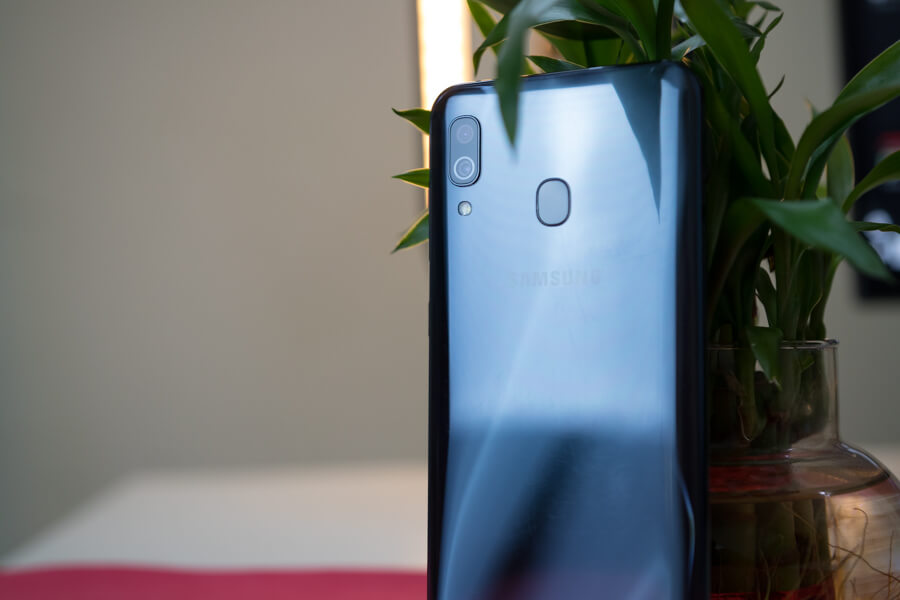 The images on it are quite good. Everything is good enough – from white balance to dynamic range and color reproduction. They pack a good amount of details, and the sharpness is there. If anything, the images might look ever so slightly washed out in some conditions. Overall, it does a good job under well-lit conditions.

Normal Vs Ultra-wide-angle
1 of 12

With the wide-angle lens, you can definitely have a bit of fun! The wide-angle lens on this one is better than we saw on the Galaxy M20, and with it, you can take some stunning pictures. The color accuracy and sharpness does take a hit, but it does serve its purpose.

The portraits, too, are nice! As usual, edge detection can be a bit of hit and miss, but it is more on the accurate side. Sometimes, backgrounds tend to be a bit blown out. Also, you get the option to adjust the blur levels post picture. So, that’s a handy feature.

Low light condition is where it falls short – by a lot. I would say that under low light, it’s basically unusable. The images lack sharpness and details, and everything appears mushy and grainy.

If we talk selfies, generally, they’re great. The amount of details it captures are okay. But the images tend to look cooler. For portraits, it is mostly the same story as the primary camera. The background appears a bit blown out, but the edge detection mostly works.

So, I wouldn’t say the cameras are the best in the price category. We do get the ultra-wide lens on this, which we don’t get on others for a similar price. They’re not really “wow”, but they get the job done.

This phone packs the Exynos 7904 processor, which kinda match the benchmark scores of the Snapdragon 636, or Samsung’s own 7885. But I feel like this is not the processor we should get for the price.

Well, the phone didn’t freeze or stutter anywhere, but everything was a tad bit slower to my liking. For instance, apps take like half a second to launch, and it can be annoying at times. It’s not that frustrating, it’s like something that won’t make that much of a difference but you can’t unsee it.

The performance from this one is also nothing exciting either. Multi-tasking and stuff is okay, and you can game on it pretty well. PUBG runs on medium settings by default, and every other game I tried, like Ocean Horn, Real Racing 3, Asphalt 9, and a bunch of others ran without any problems. The UI, too, is smooth to use.

However, heavy multi-tasking is not something it can handle. For instance, if you get a message on messenger while gaming, then, things start to freeze and it can get pretty frustrating.

Honestly, Samsung could have given it a slightly better SoC, but for the price to package ratio, I also think that would be a bit too much to ask. It is still a good performer, but hard to recommend, if someone’s utmost priority is performance.

Here, you get the Android 9 Pie with Samsung One UI. The UI is pretty standard and offers a lot of customizable options. There are a few Microsoft bloatware apps, which cannot be removed, but only disabled. But the Samsung bloatware apps like Samsung notes and such can be completely uninstalled. The UI is pretty lightweight and feels modern. Enabling gesture mode helps in one-handed usage. There’s also a “Reduce Animation” option, which can minimize the animations on your phone’s certain operation, without turning the Developer’s Mode on. And that can help your phone get a tad bit faster.

I really like this UI from Samsung. It did address what we had been complaining about from a while ago.

To me, it appeared as if the fingerprint sensor was not responsive enough. Maybe it’s the screen unlock animation, but it feels a bit slow compared to the ones on other phones. The Face Unlock is also not as fast. And while these features are showing up on a lot of phones, even on budget ones, Samsung has yet to improve on them. So, this was a bit of disappointment for me.

In terms of battery, you get a good-sized 4000 mAh unit, and so, the battery life does not disappoint. I usually got over 6 hours’ battery life on heavy usage, and that’s impressive. It’s pretty difficult to use up the battery in a single day. But you will need to charge it by the end of the day, though. 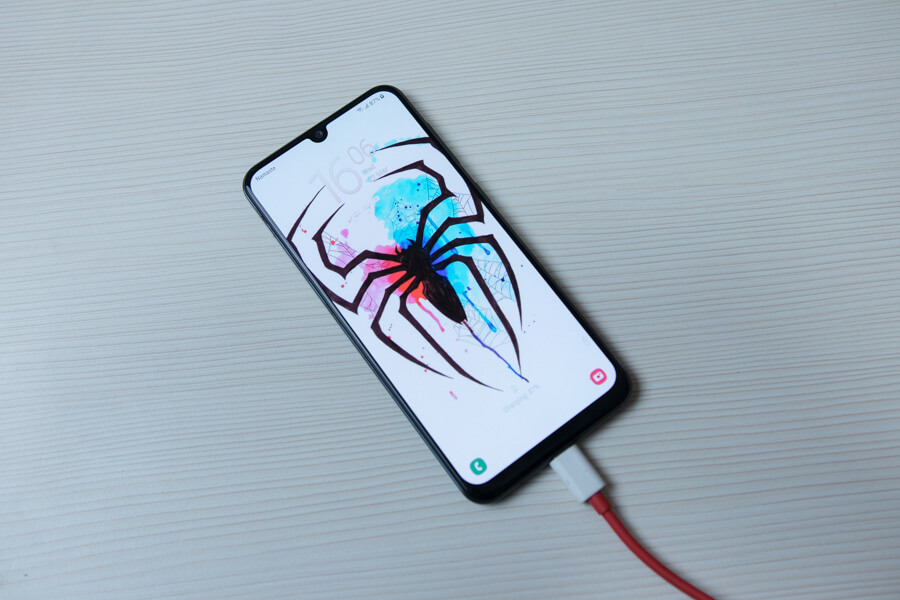 There is the always-on display option, and if you keep that on, it can eat up like 1% of your battery every half-hour or so. But, since there is no LED notification, that thing will have to stay on, even if it means sacrificing your battery. You also get a 15W Adaptive Fast charging, which can take your phone from 0 to 100 in slightly under 2 hours.

So for the price of Rs.28490 or some $250 dollars, the A30 offers you a great design, a great display, excellent battery life, decent cameras, and a user friendly UI. What it lacks in is the performance department, and that’s where the other phones like Redmi Note 7 and Realme 2 Pro excels at. Those phone has also got slightly better cameras, except the ultra-wide-angle feature.