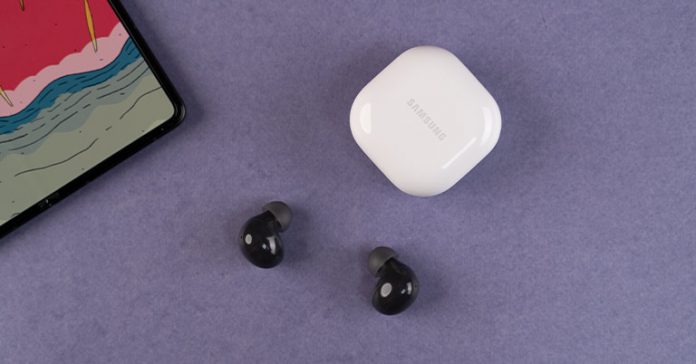 Positioned between 2020’s Buds+ and the more premium Galaxy Buds Pro, the Buds 2 delivers incredible value—with features comparable to the Buds Pro. So in this full review, I’ll be discussing all about the Galaxy Buds 2 in this review to help you decide if it is the one for you.

Let’s now talk about the earbuds themselves. Though Buds 2 is supposed to be a follow-up to 2020’s Galaxy Buds Plus, it would be pretty fair to put it against the more expensive Buds Pro, since their spec sheets reveal a lot of parallels between the two. So, I’ll also be bringing up the Buds Pro time and again in this quick tour of the Samsung Galaxy Buds 2.

Starting with the design, the Buds 2 comes in this pocketable case that weighs just 41.5 grams. It has a glossy all-white exterior which makes it prone to scratches and smudges. But on the inside, Samsung has gone with a matte finish—that matches the color of earbuds themselves. Galaxy Buds 2 is available in four color options: White, Graphite, Lavender, and Olive. If all this looks a bit too familiar, that’s because the Buds Pro comes in a similar-looking case as well. 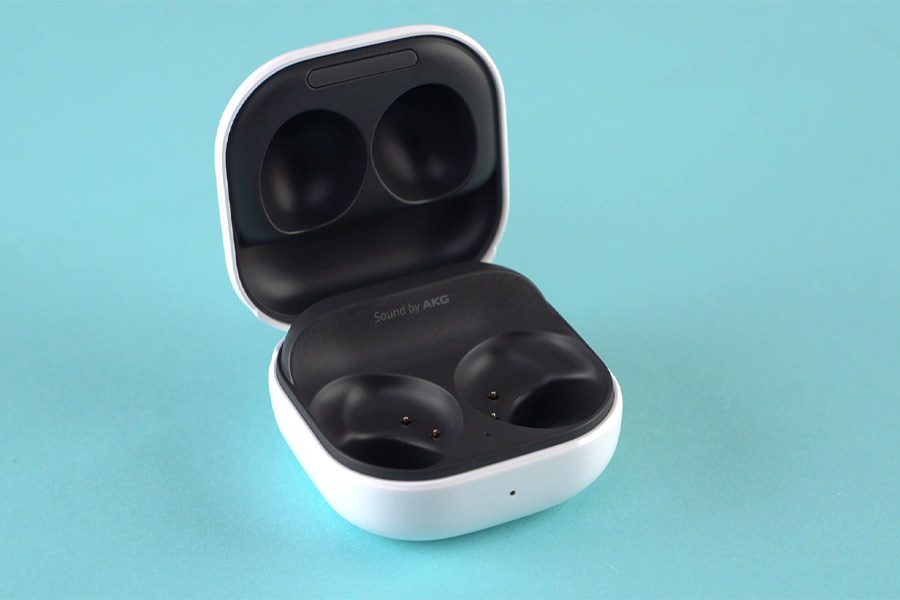 Moving on to the earbuds, they are pretty lightweight, weighing just 5 grams each—so light that you might forget about them having in your ear once you start grooving to the music.

The default ear tips fit securely in my ear but there are two extra pairs of ear tips in the box. Samsung has even added a “fit test” feature in the Galaxy Wearable app to help you attain the best fit.

All these factors contribute towards making Galaxy Buds 2 some of the most comfortable earbuds to put on—even for long hours. I also like how they don’t stick out much from the ears, unlike the relatively bulky-looking Buds Pro. 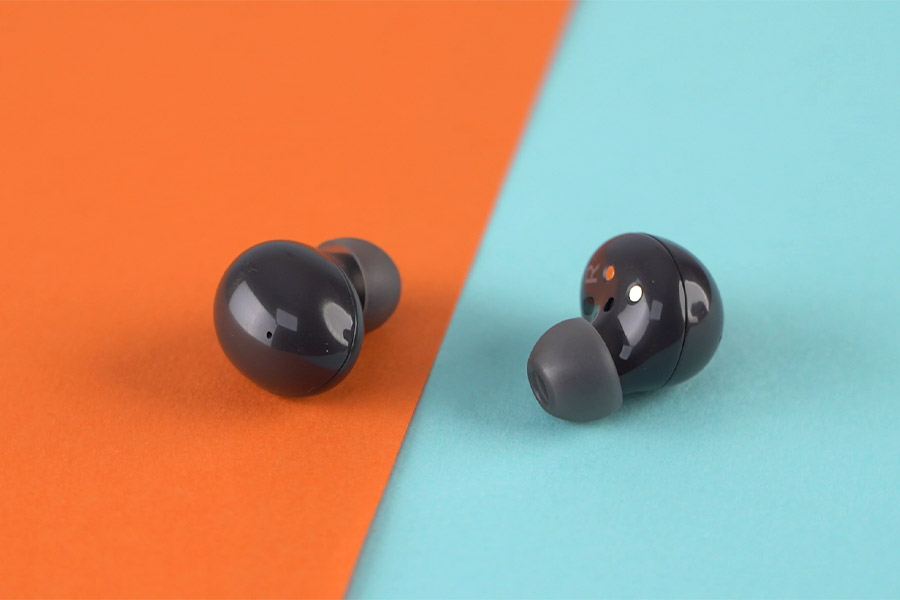 Once you get accustomed to the comfy fit of Galaxy Buds 2, resorting back to the Pro is not easy. Don’t get me wrong, the latter is not uncomfortable by any means. It’s just that the Buds 2 feels much better—at least to my ears.

That being said, the Buds Pro does have a superior IPX7 certification as opposed to Buds 2’s IPX2. So you’re gonna have to be extra careful when using the Buds 2 under the rain, or even you sweat excessively.

In terms of connectivity, Galaxy Buds 2 enjoys the newer Bluetooth 5.2 protocol—opposed to Bluetooth 5.0 on the more expensive Galaxy Buds Pro. And I’m glad to report that there are no connection drop or interference issues with either of these earbuds.

Here, the Galaxy Buds 2 pairs with the aforementioned Galaxy Wearable app, which also lets you play around with different ANC modes, control options, and audio presets. This time around, the Buds 2 plugin is not available on iOS. Thus, iPhone users won’t have access to the app.

Like the Buds Pro, the Buds 2 can quickly switch between Samsung’s Galaxy lineup of tablets, smartwatches, and smartphones—given that all devices are connected to the same Galaxy account. It even supports Quick Pair and Swift Pair with Samsung and Windows PC, respectively.

When it comes to controls, Buds 2 has a touch-enabled area on either earbud to play/pause music, skip tracks, or retreat to the previous one. You can also switch between ANC and ambient mode by long-pressing the earbuds. Inside the Galaxy Wearable app, there’s the option to configure these for volume control or waking up the voice assistant as well. However, this customization feature is not available in non-Samsung phones. Samsung has apparently even added the “Double Tap Edge” volume control gesture on the Buds 2 via an OTA update, but I’m yet to receive the said update (R177XXU0AUH2). It works fine on the Buds Pro, but I’m not sure how well it will work on these earbuds since it has a different surface.

Nonetheless, I did notice a slight delay between my touch input and earbuds registering it. However, there has not been a single instance where Buds 2 has failed to register my touch input so far. Also, the convex structure of the touch-sensitive area means your fingers naturally settle to the surface without any difficulty.

If you recall, I had mentioned in my initial impression video of these earbuds that Buds 2’s sound quality is reminiscent of the more expensive Buds Pro. While that is true for the most part, I must say I have noticed some differences having used them for weeks now.

Before going into any intricate detail, I want to mention that I used a Samsung smartphone, particularly the Galaxy A22, to test them out. Thus, I was able to make use of Samsung’s proprietary Scalable Codec. On the other hand, non-Samsung phones will have to rely on AAC and SBC codecs only.

Here, the Galaxy Buds Pro handles the extreme lows and highs better. You get more thumpy bass, better instrument separation, resulting in an overall superior listening experience, which is quite apparent when listening to songs like MMM (by Seedhe Maut.) Similarly, American Idiot by Green Day feels more sprightly on Buds Pro.

That being said, everyone has a different taste in music. And if you happen to be a casual listener who mostly tunes into pop charts, Galaxy Buds 2 won’t disappoint. In fact, listening to something like Stay (by The Kid LAROI and Justin Beiber) and Happy Endings (by Mike Shinoda feat. iann dior and UPSAHL), I found the audio quality to be quite similar on both earbuds.

On some songs like Dua Lipa’s Levitating, I preferred the subtle sound of Buds 2 to the relatively heavy audio profile of the Buds Pro.

Perhaps the biggest differentiator between these earbuds in the audio department is the 360º audio support on the Buds Pro—which the Buds 2 lacks. With this, it can track your head movements for an immersive audio experience. So, if you want the absolute best pair of earbuds Samsung has to offer, then Galaxy Buds Pro is still the way to go.

Regardless, Buds 2 is ANC-capable though. I tested it on my commute to the office and found it to be fairly effective. Although it did not cancel the ambient sound completely, it managed to subdue the intensity of the traffic noise to a great extent. Plus, I found that it is more effective against low-frequency sounds than say, bells, horns, and human voices.

Also, ANC on Buds 2 isn’t on Par with the Buds Pro, the High ANC setting on the Buds Pro delivers better cancellation.

There’s also the Ambient Sound mode, which is Samsung’s take on transparency mode. Since Buds 2 lacks Voice Detection like the Buds Pro, you will have to manually turn it on. Human voices under Ambient mode come out synthesized to my ears. But this has always been how Samsung chooses to implement ambient audio, so complaining about it isn’t going to do any good

Furthermore, you can choose between low, moderate, and high ambient modes. As you go higher up the settings, the overall incoming sound gets louder, though it doesn’t seem to have a greater impact on human voices. To compare, Galaxy Buds Pro offers an extra high setting too but I found the medium setting to be more and adequate.

I’m quite impressed by the call quality of the Buds 2 as well. Samsung’s new machine learning-based algorithm works well as my voice was always clear and audible even when I was walking through a busy street. Still, the Buds Pro manages to perform better in this regard—especially in windy situations—because of its windshield technology which is not present on the Buds 2.

Samsung Galaxy Buds 2 has a game mode as well, which brings down the audio latency by a bit. Still, I would not recommend it to any competitive gamers as the noticeable in-game latency still feels quite weird. 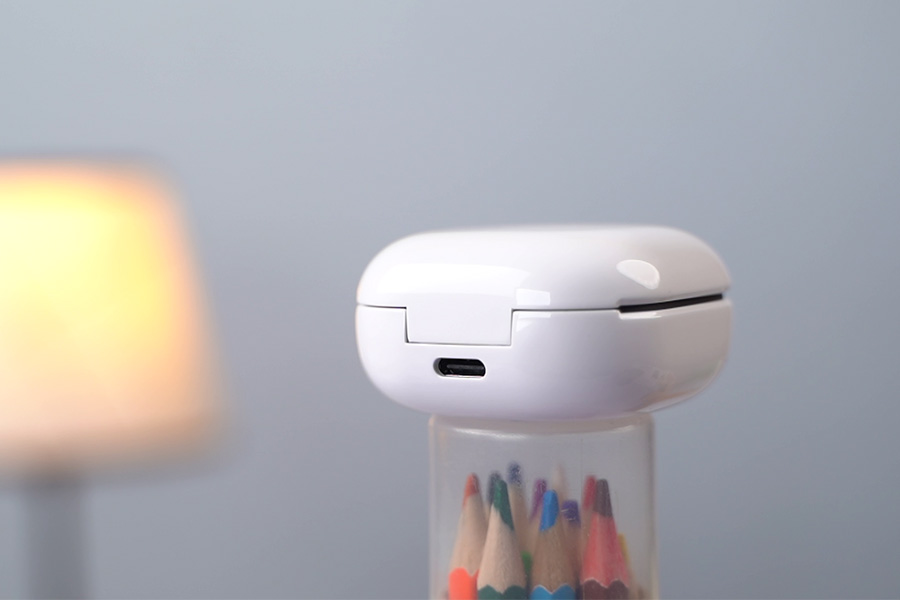 Getting to the battery side of things, I managed to get the advertised endurance of 5 hours with ANC on from the 61mAh cell on the Buds 2. Without ANC, it can deliver around 7.5 hours of listening time. On the other hand, the case can fuel the earbuds up to three times. Galaxy Buds 2 supports fast wired and wireless charging as well.

All in all, Galaxy Buds 2 is here to give Samsung’s own Galaxy Buds Pro a run for its money. The latter still stands out with its superior ANC and slightly better audio tuning. That being said, it’s hard to recommend the Pro given what the Buds 2 offers at a much cheaper price, especially in markets like Nepal and India. So unless you own an iPhone, Galaxy Buds 2 is among the best pair of TWS earbuds under USD 150. Also, it’s pretty disappointing to see a couple of features like quick pair and control customization lacking on non-Samsung Android phones

Meanwhile, Check out our early impressions of the Samsung Galaxy Buds 2.