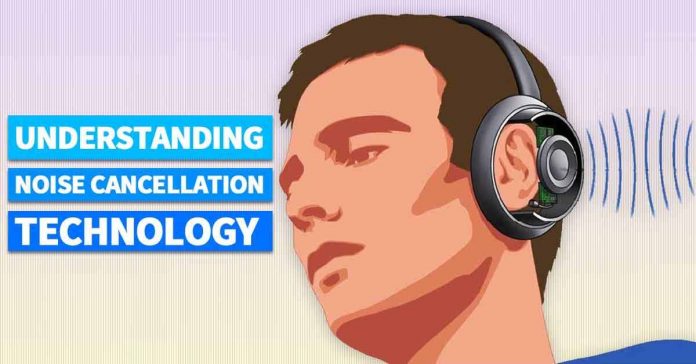 Before getting to understand noise cancellation, a bit of background. Contrary to what The Weeknd says, the city is rarely “cold and empty”. In fact, it is almost always so crowded and noisy that it’s challenging to salvage a moment of peace. Well, the ongoing lockdown or stay-home directives have helped bring the noise pollution down by a bit.

Still, “noise” will forever remain a part of our lives and we’ll actively look to mitigate its consequences. Be it by wrapping your hands around your ears or slapping in a pair of earbuds, headphones, or other similar products at your disposal. And the latter is definitely the ideal choice of the two; especially if you’re someone whose work environment or community is prone to loud noises. If only there was a proper technology for the cancellation of such noise!

The importance of hearing protection

Besides acquiring a personal sense of comfort & quietness, subjecting one’s ears to noise cancellation is also important with regards to hearing protection. There have been multiple medical research confirming the adverse effects of prolonged exposure to excessive noise.

From increased stress to the loss in productivity, to Noise-Induced Hearing Loss (NIHL), such submission to loud & consistent noise is harmful to our health.

As a result, noise protection is an important facet of maintaining a healthy lifestyle; which surprisingly seems to have grabbed a less-than-required level of attention.

Here, you don’t need an expensive set of headphones to experience noise-canceling at work. As a matter of fact, even the thermal earmuffs that we wear during winter to keep our ears warm provides passive noise cancellation. But we’ll discuss that in greater detail later on. Noise-canceling headphones, on the other hand, help eliminate unwanted sounds in the environment to deliver a noise-free listening experience. It uses techniques like active noise control, soundproofing, or a combination of both.

Soundproofing is a simple approach to block out sound using noise barriers or damping technologies. Though professional studios have a lot more intricate & technical outlook to soundproofing, it is as simple as the infamous application of egg cartons on the wall. Well, that’s a debunked myth, though it does help in reducing echoes and defusing soundwaves by spreading them out. Having said that, it is nowhere near effective as acoustic foams.

Moving on, active noise control is where it gets interesting. The technology dates back as far as 1936 when a German inventor by the name of Paul Lueg obtained a patent on canceling noise by inverting the soundwaves’ polarity.

But it was only theoretical and the world would have to wait 50 more years for Dr. Amar Bose & the team to come up with a prototype headset with built-in ANC for airline pilots. Does that name sound familiar? Yeah, Dr. Amar Bose is the founder of Bose Corporation—which has become almost synonymous with noise cancellation technologies in the audio industry.

So, in terms of consumer-grade headphones, there are two types of noise cancellation; passive and active. Passive noise cancelation (or as many people call it “noise isolation”) is a way to block ambient noise without any kind of power source.

Actually, it relies solely on the principle of forming a seal against your ear so that soundwaves cannot penetrate through as much. Such headphones come with extra padding which completely encloses your ears. And with that, many people may find it uncomfortably bulky.

With its design, passive noise cancellation is ideal for isolating irregular, high-frequency sound.

And depending on the design of a headphone, it can block out varying degrees of noise levels. You see, because there are earbuds and headphones of different designs, their noise isolation capacity varies as well. For instance, an in-ear headphone with a silicone, foam, or plastic ear tip goes directly into your ear canals and stops certain levels of soundwaves from passing.

However, this entirely depends on the degree of seal you can get. With everyone’s ears shaped differently, one uniform design of an in-ear headphone will not result in an equal degree of noise isolation. That’s why a personalized fit is crucial for these to deliver on their promise. And thus, manufacturers ship them with ear tips of different sizes so that they’ll fit properly. On average, these headphones block anywhere between 10 to 15dB of noise.

Then you have your full-on headphones with a comparatively big and bulky form factor. It can be categorized into two types: on-ear and over-ear. And they’re pretty self-explanatory as well, to be honest. On-ear headphones have a smaller ear pad/cup which rests on top of your ears.

These emphasize delivering a more “natural” stereo sound directly into your ears while sacrificing for noise isolation properties. Meanwhile, over-ear headphones have a significantly large ear pad and a much thicker headband that fully covers the ears. With an optional boom arm mic.

Over-ear headphones can be further divided into open-back and closed-back designs. The first one has CNC holes or perforations/grills on the outer shell, which freely lets in the air around the speaker element.

The reason behind this is to give a much more natural & clear listening experience since it doesn’t let the pressure build up inside the ear cup to result in echoes or other white noises. All of this comes at the clear disadvantage of possibly noise-riddled audio. Open-back headphones are therefore only suitable for listening in a quiet setting, despite their excellence in sound quality. 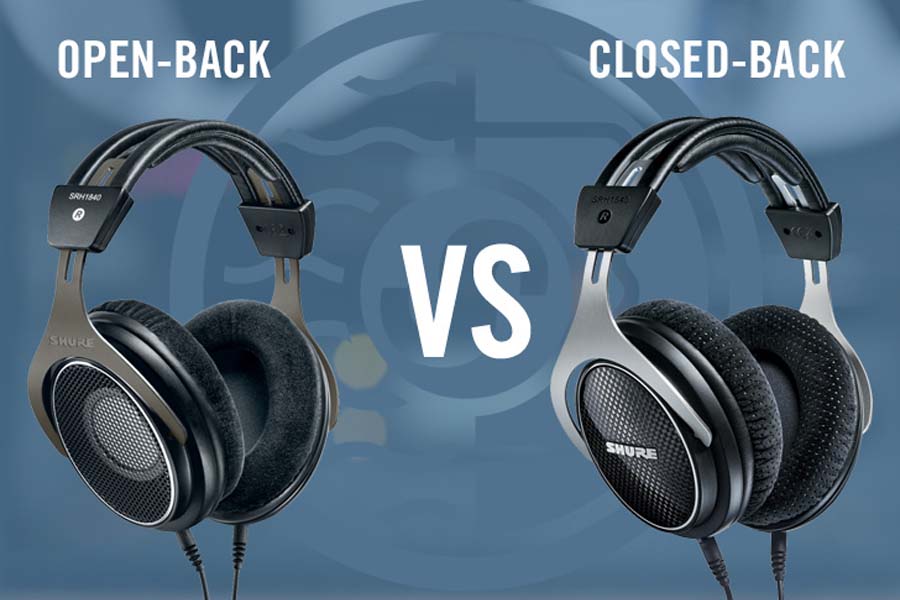 Closed-back headphones, on the other hand, are completely sealed around the back with large ear cups and an insulated shell of plastic or metal that covers your ears. As you can imagine, these perform far better in terms of noise cancellation compared to its counterpart. The physical structure of these headphones alone helps to reduce noise somewhere between 8 to 12dB.

However, its major drawback is that closed-back headphones are significantly bulkier and can be uncomfortable to wear for a long time due to heat and perspiration around the ears.

Those were about passive noise isolation. Now let’s move on to active noise cancellation (ANC). It doesn’t just rely on the headphone’s padding to restrict the in-flow of noise. These have microphones that “actively” listen to incoming sound and process them to phase out ambient noises – based on the same reverse soundwave polarity theory proposed by Paul Lueg that we talked about earlier.

The thing each, sound travels as longitudinal or transverse waves (depending on the medium), each with its own peak/crest and valley/trough. Here, a “peak” is the highest point while a “valley” is the lowest point in a wave cycle.

Under ANC, it uses microphone(s) to analyze the sound pattern of incoming noise and then uses software-based processing to generate a soundwave that is the exact opposite (180º) to “cancel” each other out. This phenomenon is more popularly known as “destructive interference”.

Consequently, what you get is noise-free audio. You don’t need to crank up the volume to max to be able to enjoy your music without any disturbance anymore.

Well… not quite much.

You see, ANC only works best against consistent and low-frequency noises,

where the internal mechanism of the headphone is powerful enough to produce the counter-waves. For that reason, it is ineffective against the high pitch and sudden transient noises; while almost completely blocking out noises from airplane engines, generators, ceiling fans, railways, etc.

Like how passive noise isolation differs according to the physical design of the headphone itself, ANC implementation varies based on the placement of the mic. Three of them, to be exact.

Under Feedforward ANC, the mic is placed outside the ear cup which listens to incoming noise before it gets through the speaker system and uses a digital signal processor (DSP) or similar hardware to create the anti-noise. It is great for reducing mid-frequency noise up to 1-2kHz and is easy to implement into earbuds that have a relatively smaller surface area to install the mic inside the ear cup.

Unfortunately, it’s susceptible to failure if the wearer puts on the headphone incorrectly. Or if the noise is coming in at a weird angle. If someone puts on the headphone with a loose fit, feedforward ANC will fail hopelessly as it cannot process such a high frequency of noise. Also, because of its placement and a comparatively quicker response to noise signals, feedforward ANC is sensitive to wind howls and other sudden high-frequency noises.

To counter the defects of this, Feedback ANC comes with an exact opposite working principle. Here, the microphone is placed inside the ear cup itself, next to the speaker system. With this, manufacturers need not worry about issues like the headphone’s fit, wind howls, etc. Its main advantage is that the captured noise is exactly the same as what the listener hears. Therefore, feedback ANC can adapt to the variations and correct the signal as necessary.

Having said that, it has its downfalls too. Since the mic is so close to the speaker, it has a lesser reaction time to process the incoming noise. What’s more, that placement may also result in the dreadful feedback noise (that sharp, screeching, high-pitched noise you may have heard in the sound system).

That’s because the system may pick up its own anti-noise signal. Feedback ANC is also incapable of processing mid-frequency noise; compared to the one above and is only reliable for low-frequency noises.

Finally, there is the Hybrid ANC. And as you might’ve guessed already, it is the combination of Feedforward and Feedback ANC. Here a microphone is placed on both, inside and outside of the ear cup. As a result, it provides all the pros of the two, without any of the downsides. Better range of noise attenuation, insignificance to how someone wears the headphone – you name it, hybrid ANC delivers it.

But that doesn’t mean it is completely free of any drawbacks. The most noteworthy one, being the cost. Besides the increase in the number of microphones, it is also crucial that they be of high quality to circumvent unwanted white noise. The headphone itself requires more power to be able to handle all the additional processing tasks too. And all of this reflects on the final cost of the headphone.

How do you get the best noise cancellation?

So, with everything we’ve discussed so far – what are the recipes for the best noise-canceling headphone?

Certainly, one with a closed-back design & hybrid ANC sounds like the obvious choice.

Despite that, there are a couple of other variables to consider as well. First, most manufacturers opt for DSP to counter noise signals despite its flaws. For example, it is notably hungry for power thus reducing the headphone’s overall battery life. Additionally, it also introduces an avenue for the delay as the noise signal has to be first converted to digital for processing, then back to analog to be sent into the listener’s ears.

There is a solution though. Analog signal processing gives an instant reaction to noise and also gives a better battery endurance while being a little rigid to change & difficult to engineer. More importantly, a noise-canceling headphone has to sound good as well.

Though the closed-back design is friendly to noise cancellation, its audio performance is slightly inferior to open-back headphones. That’s because it leaves little room for the speaker’s diaphragm to vibrate. In other words, you get weaker bass. Fortunately, manufacturers have found a workaround to this problem by creating a vent for letting out the trapped air; which thus gives the diaphragm more room to vibrate.

Wrapping it all up, choosing a noise-canceling headphone is a pretty simple process. You gotta be confident in what type of music you mostly listen to, where do you see using it at most times, and what form factor you’re comfortable with. For casual use indoors, one with passive noise isolation will do just fine. Although, if you’re someone who travels a lot (road or airways) or someone who works in a particularly noisy environment, then you’ll need one with a decent ANC capability.