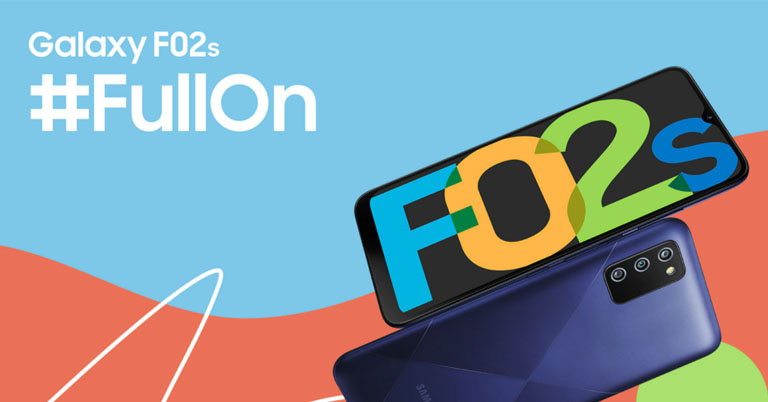 Samsung has launched the Galaxy F02s in India as the latest entrant in the Galaxy F series. The device is actually a rebrand of the Samsung Galaxy M02s which is already available in Nepal. In this post, we will be taking a look at the full specs, features, expected price in Nepal, and availability of Samsung Galaxy F02s.

Galaxy F02s is the latest entry-level smartphone in the F series. It comes with a 6.5-inch HD+ panel with an Infinity-V notch. The device has a resolution of 720×1600 pixels and an aspect ratio of 20:9. At the back, it has a haze-and-matte design which is available on three different color configurations. In addition, the rear panel houses a rectangular camera cutout for a triple camera setup.

The phone is powered by the entry-level Snapdragon 450 chipset. It’s an octa-core chipset with a clock speed of up to 1.8GHz. Fueling the device is a massive 5,000mAh battery. Booting the device is Samsung’s own One UI on top of Android 10 which lets you navigate through every task effectively. Galaxy F02s is available on two memory configurations: 4+64GB and 3+32GB.

Similarly, the phone has a triple camera setup at the back with a 13MP primary sensor which is followed by two 2MP sensors for portrait and macro shots. The main camera can shoot video in 1080p at 30fps. The front display houses a 5MP lens in a waterdrop-style notch for selfies. Moreover, the device utilizes Bluetooth 4.2 for connectivity. Plus, there’s a 3.5mm headphone jack too. The device of built on a thickness of 9.1mm and weighs 196gm. A 5000mAh battery with 15W charging fuels the phone via a Type-C USB port.

Samsung Galaxy F02s will be available in India starting April 9 at a starting price of INR 8,999. The higher 4/64GB configuration costs INR 9,999. Galaxy F02s is an India-exclusive device but if Samsung Nepal decides to launch it here, we expect its starting price to be around NPR 14,999.