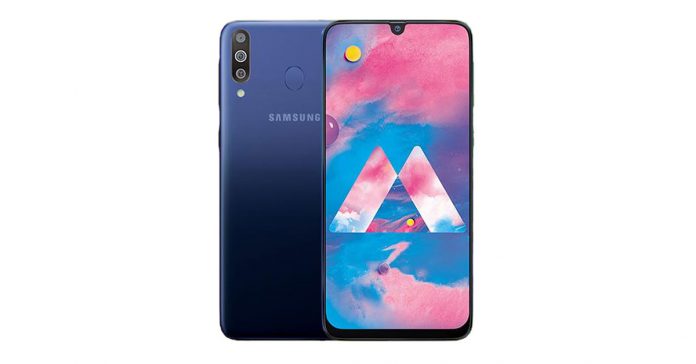 Samsung has launched the third member of the Galaxy M-series. The Galaxy M30 follows the Galaxy M10 and M20 and is the new addition in the Korean Giant’s budget portfolio. The Samsung Galaxy M30 was just announced at an event in India, and it packs in a lot of features that make it go up against the best devices of its price range.

The Samsung Galaxy M30 is a 6.38-inch device that comes with a Super AMOLED Full HD screen with the Infinity-U notch. Underneath the hood, this device is powered by the latest octa-core Exynos 7904 processor. It is aided by 4 GB and 6 of RAM, and for the storage purpose, Samsung has included 64 GB and 128 GB variants with support for external memory. In the camera department, the Samsung Galaxy M30 features triple cameras on the back. There is a 13-megapixel primary camera coupled with a 5 MP wide-angle and a 5 MP depth sensor secondary cameras. For selfies, there is a 16-megapixel selfie shooter up front. The Galaxy M30 has a rear-mounted fingerprint scanner on the back. It runs on Android 8.1 Oreo out of the box with Samsung Experience UI on top. Samsung has promised that the device will receive the Pie update soon.

For lighting up the phone, Samsung has included a large 5,000 mAh battery which we have seen it use on the Galaxy M20 as well. This battery is supported by a 15W fast charging technology and is chargeable through the Type-C port on the bottom of the phone.

The 64 GB and 128 GB version of the Samsung Galaxy M30 run for INR 14,990 and INR 17,990 respectively. However, there are rumors circulating around that Samsung is not expected to launch the Galaxy M30 here in Nepal. The device will go on sale starting March 7 in India.