Social Media, these days, are filled with advertisement banners of engineers and their respective groups, giving a hint of elections coming around. Nepal Engineers’ Association is on the process to elect its 31st executive body and five members of Nepal Engineering Council on September 16th, 2016. Nepal Engineers’ Association (NEA) is basically an independent non-profit organization of Nepalese engineers, registered under the Social Service Act of the Government of Nepal. It was established in 1962. Today, it represents around 20,000 engineers, belonging to various engineering disciplines including architects, civil, electrical, mechanical, and electronic which is governed by an elected executive body of 15 members, led by the President of the association for a tenure of two years. NEA’s mandates include promoting fellowship goodwill and cooperation assistance among the Nepalese engineers, safeguarding their rights and interests and promoting the development of science and technology.

NEA facilitates and coordinates the professional activities of the independent engineering specific professional societies and has also been at the forefront of developing fellowship and goodwill with international engineering associations and institutions. Presently, NEA is a member of World Federation of Engineering Organizations (WFEO) and was instrumental in the establishment of Federation of Engineering Institute of South and Central Asia (FEISCA).

Yesterday, we got an opportunity to spend some quality time with Bidhan Pokhrel who also have filed a candidacy for the post of an executive member in the upcoming election of NEA. We asked Bidhan Pokhrel some of the questions regarding the election and his candidacy.

On with the interview…

1. So, let’s start with a very simple question. Tell us about yourself. 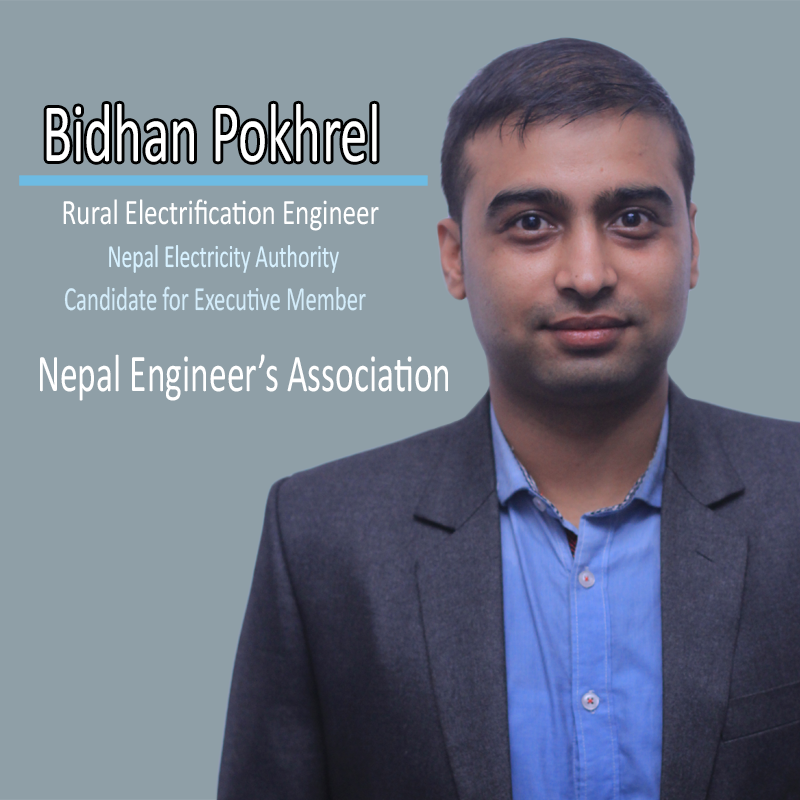 I am Bidhan Pokhrel, an Electrical and Electronics Engineer graduate from Kathmandu Universty. Professionally I am working as an Electrical Engineer in Nepal Electricity Authority, Community Rural Electrification Department for the past two years and have designed, planned and executed several electrification projects in rural communities. Besides I am a Non-life Insurance Surveyor as I have played a decent role in loss evaluation of damaged properties and settling Insurance claims efficiently after the massive earthquake.

2. What made you file a candidacy for the executive member of NEA election?

I, as a professional engineer, just feel that there is a lack of protective, accountable, controlling body here in our country. Even though Nepal Engineers Association (NEA) exists but it has a very limited reach and us common engineers rarely get access to any activities within the organization. Hence, in this scenario, I have filed up a candidacy as to provide a notable contribution in the betterment of we engineers and make NEA a common ground for the upliftment of professional engineers.

3. So, how are you going to overcome such limitations?

I along with my team here in the election have a strong agenda of Digitalization of all sector and works carried out by NEA, reducing the paperwork and promoting IT infrastructure. Online Membership Management, E-Voting portal management system, Online weekly and monthly seminars would certainly be the first set of works I would initiate if been elected. In this situation when IT is backing up all the activities and movements of the world, we believe that we ourselves being a technical force would not be suitable no to rely on IT for the management and operation of NEA. We as a team have a lot of agendas to be carried out, as actions speak greater than words, it would certainly be better if we come up as we have done this rather that we will do this. But as a major change we would certainly coordinate with different sectors to establish a Research Unit/Consulting Unit as try to produce as much capable consultants here in Nepal itself and next speak up officially from the organizational level for the insensible and unrealistic thoughts preached publicly related to any sector of engineering with calculated and specific data’s.

4. How are you conducting your election campaign?

As we have focussed on Digitalization of the organization I personally and as a team also we have focussed on digital media for the promotion and campaigning. I have tried to speak personally will all my engineer friends, seniors, and juniors to support in my election campaign. Next us as a team, in the leadership of Dr. Sumitra Amatya, as president candidate has planned to visit all the election centers all over Nepal and conduct a mass campaign.

I present myself as a youth representative in this election who could justify engineering from an early professional level and would certainly work forward for the innovative management and utmost mobilization of engineers here in Nepal if elected. I request all my engineer friends, seniors, juniors, and well-wishers to cast your precious vote for the post of the executive member and the team lead by Dr.Sumitra Amatya as president. We would not let your vote be wasted and would certainly work in the progress of Engineering Sector and the organization NEA itself as a young, energetic, enthusiastic and Innovative team. It would definitely be easier for me to fulfill my commitment with team work as we are a team of progressive and professional engineers working for a better tomorrow.