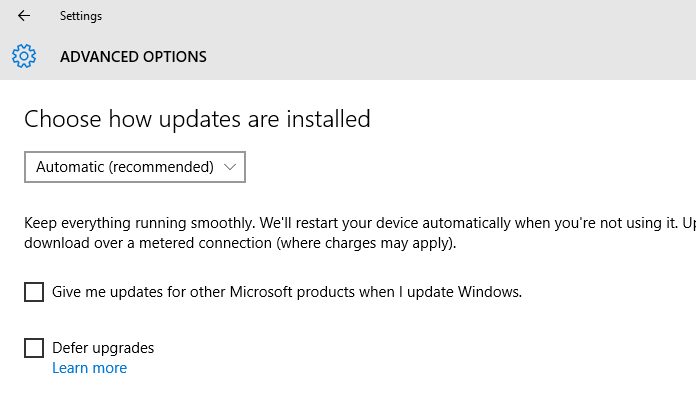 If you’re a Windows 10 user, you must be aware of automatic windows updates. Unlike previous versions of Windows, in Windows 10 updates are automatically downloaded and installed. There isn’t an option to disable them. You must have tried Googling how to disable windows 10 updates. Despite all your efforts, you must have ended to be in despair when you found out Windows updates can’t be disabled. But with the Microsoft’s announcement of build 15002, users can look forward to pause or postpone the updates.

It must be a relief for those mad at Windows for forcing its automatic updates in Windows 10 devices. Microsoft said: ‘We’ve added an option that will enable you to pause updates on your computer for up to 35 days.’To pause your machine, go to the Advanced options page of Windows Update Settings.’ But not everyone is happy. This new feature will only be available in Professional, Education, and Enterprise editions of Windows. If you have the Windows 10 Home edition, don’t feel low. There are some changes for you too. Microsoft said: ‘Windows Insiders with the Home edition of Windows will now also be able to leverage the increased 18 hours max window for Active Hours.’ Until now, Windows 10 home users could set the maximum of Active Hours to 12 hours. However, outside of this Active Hours, Windows 10 Home users can’t pause the update.

This new Build 15002 brings some appreciable changes along with this update pausing and postponing features. You can find out detailed information on what’s new in this build in Microsoft’s blog. I’d like to mention few of the appreciable changes that were brought in build 15002. Microsoft Edge is getting some changes. You can preview opened tabs with a click, you can restore your previously browsed tabs and you can open new private window by left clicking on edge icon in the taskbar. Now you can organize different Start tiles into a folder with a drag and drop. Plus, you can capture part of the screen by pressing “Win+Shift+S” and then can paste it as an image elsewhere that can be OneNote or Paint or similar apps. Management of Themes has now moved into the Personalization section of the Settings from the Control Panel.

Other improvements include Cortana Improvements, virtual reality support, 3D modeling, and even Braille support in Windows. This build comprises of different changes, improvements, and fixes for PC.