Here’s the thing. There are great laptops, good laptops, and bad laptops. And only a handful can be called great. Most of them can only remain in a good category. We have one similar laptop here – the ASUS Vivobook S14 S430U, or just S14, in short. This is an ultra-book that came out in the first quarter of 2018. Let’s talk about if this ultra-book is still relevant.

Ultrabooks are generally, more or less, the same. They’re mostly known for their compact design, sleek looks, and lightweight. And this one is the same. It looks like any other ultrabook out there. Its mostly plastic, but has a brushed metal finish, both inside and out, to give a premium look and feel. 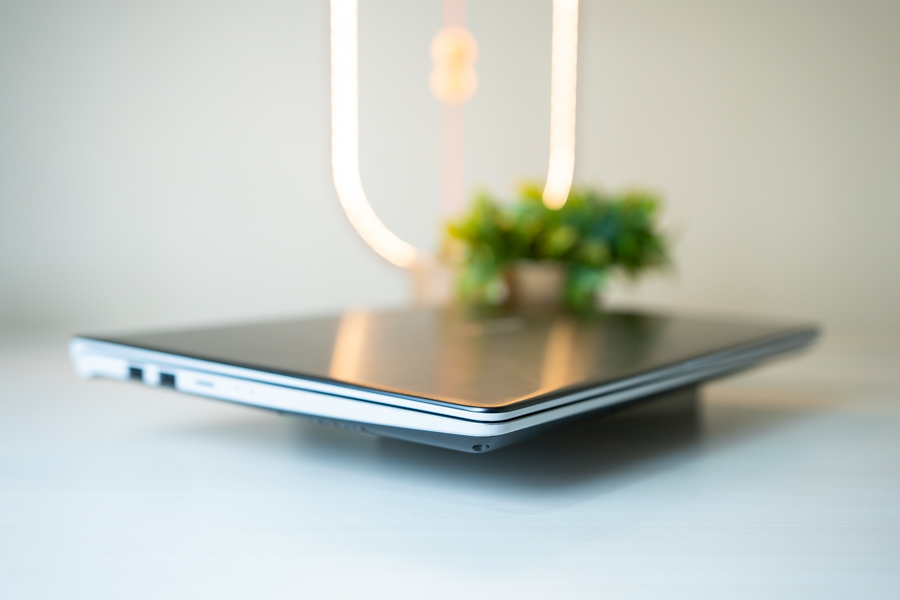 The only thing that sets it apart is a bit of protrusion on the lid that extends a bit beyond the base. That raises the base of the laptop slightly when opened, which improves air-flow underneath. It improves both the thermals and prevents your lap from getting roasted from the heat. Plus, this means you can use it easily while laying on your bed too. Being a 14-inch model, it sacrifices a separate number-pad, but does leave out big spaces on the sides of the keyboard, which looks kinda unnecessary. The brushed lid texture attracts finger smudges quite a lot, but that’s very common, so, can’t complain. 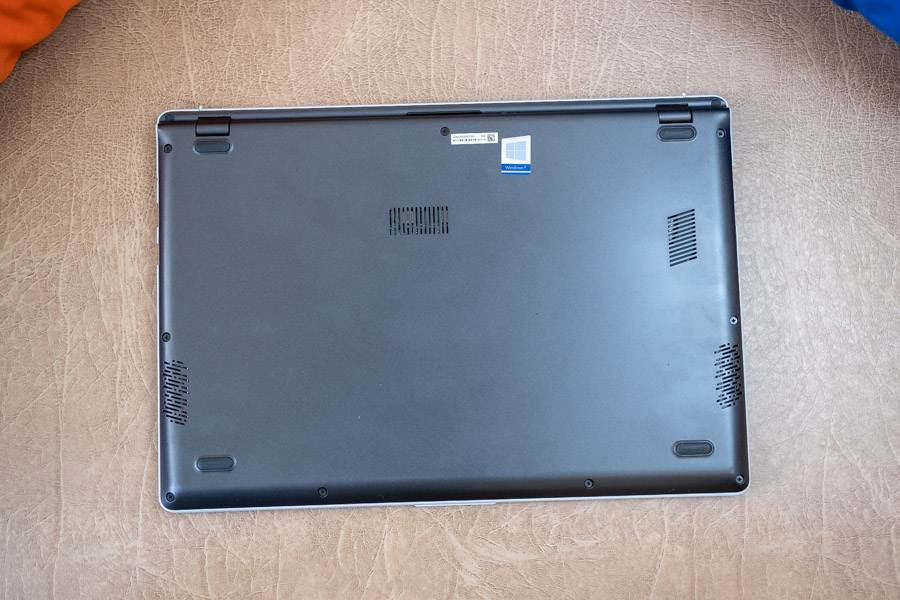 At 1.4 kg, this isn’t your lightest ultra-book. I like Acer Swift 5 in terms of weight and portability. But being slightly heavy gives it a bit more sturdiness – there’s only slight flexes on the lid and the keyboard deck. So, you can say it maintains the balance between portability and build.

Ultrabooks are not known for a great selection of ports. And this one, tries to. With three USB-As, one of which is a USB 3.0, a USB-C (without Thunderbolt 3), an HDMI, an audio jack and a microSD card slot, the selection of ports is okay. But the microSD port looks a bit less practical. I mean, if you’re into editing and stuff, a regular SD card slot would be a lot more usable.

When you look at the keyboard, something about it gives a bit of a cheap vibe. Maybe it’s the hard silver color, but I don’t look how it looks. 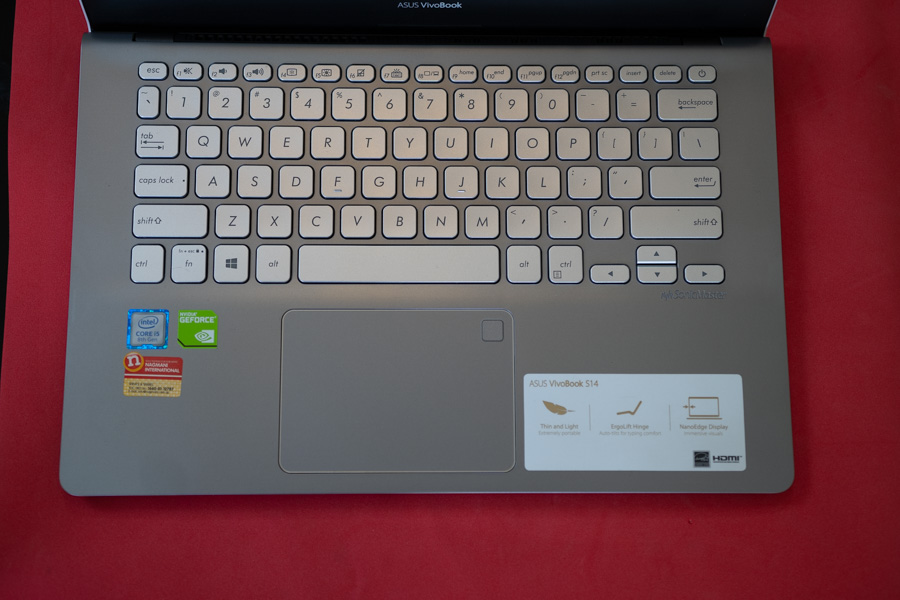 On the other hand, the typing experience is just the opposite. With ample key travel and a good amount of spacing between the keys, typing is pretty comfortable. Also, there’s a good amount of tactile feedback on them.  There is also 3-level back-lighting, but that doesn’t look aesthetically pleasing. And the half-sized arrow keys will take some getting used to, but that’s how ultra-book keyboards are. 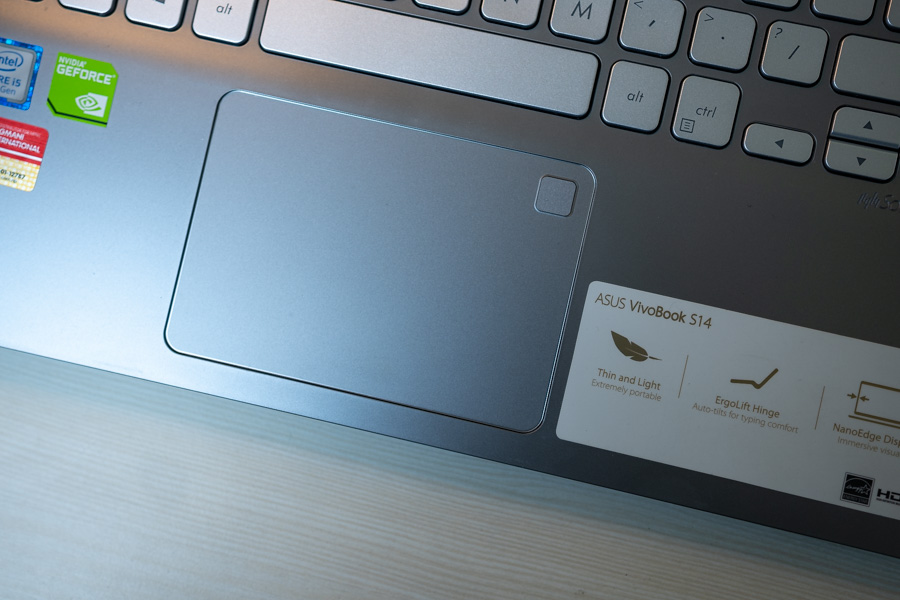 I also liked the trackpad. Its glass surface is very smooth and tracking is fairly accurate. The size is also great for an ultrabook, and it does a good job with gestures as well. You also get a fingerprint sensor on it, with Windows Hello feature, but that is optional, though.

Overall, if you don’t judge the keyboard by its looks, it’s actually good enough.

As for the display, this laptop features a Full HD IPS LCD panel. It feels like the de-facto standard for ultrabooks. The screen offers decent brightness levels and good viewing angles. However, it is not bright enough to be used in well-lit areas. The color gamut coverage is where it falls short. With only 57% NTSC Color Gamut Coverage, this display is too dull to be used for editing stuff. It is fine for working and media consumption; even gaming – (for what games are playable), but this is not something I’d recommend for any kind of content creation. If you just use it for normal office usage and watching movies, there is nothing to complain about.

One thing I like about the display is that the bezels on the laptop are fairly slim. An even so, the webcam is exactly where it should be – at the top.

As far as ultrabooks’ performance is concerned, this one could use quite a bit of tuning. The hardware choice is great. You get the 1.6 GHz 8th-gen Intel i5-8250U processor. And it is backed by 8 GB of DDR4 2400 MHz RAM. On paper, that should make it zippy enough for a power efficient processor.

But the bottleneck here is its choice of an HDD rather than an SSD. Now, there are SSD variants for a higher price, but this model here only has an HDD. And if you’re coming from an SSD, then, you’ll find it very very annoying to use.

Get this for instance. If you’re someone like me who opens your Google Chrome first whenever you start your laptop, it’ll take like 20-30 seconds to fully open it. So, you need a bit of patience to work with it.

But once it loads up, then, it’s fast enough. You can have like 15 tabs open on your browser, and it’ll still hold its own. Using Photoshop is also smooth enough, but I didn’t do any video editing on it because of its color constraints. So, no telling if it can handle that.

Light gaming is supported by its dedicated GTX MX150 graphics with 2 GB V-RAM. Now that is an entry-level graphics card, so, don’t think you can play a lot of games on it. Games like FIFA and CS:GO can give you acceptable frame rates on medium settings while PUBG is barely playable at the lowest of settings. Dota 2 runs okay, and other than that, there aren’t many games you can play on it.

And even that needs some patience as you’re loading the games from your HDD. So, do yourselves a favor and get the SSD variant. Or even if you get one with an HDD, you can install an SSD as it does come with an M.2 SSD slot.

For an ultrabook, the battery is pretty average on it. You get a 40 Watt-hour battery, and that’s actually good for an ultra-book. But even so, I got only about 4 hours of battery life at most with my standard office usage.

Maybe it’s the sluggish HDD that eats up the power because I got about 6 hours on the Acer Swift 5 which has a slightly smaller battery of 36 Watt-hours. And since it doesn’t last a typical office day, you’ll need to carry your charger with you. So, it’s a good thing that the charger is as small as a phone charger.

Plus, it has got a Fast Charging feature in it, which can charge your laptop fully in some 1.5 hours. That’s something you don’t get on many laptops – and having one is very convenient.

A power efficient processor can only do so much, so, the thermals aren’t a very concerning matter here. It can get a bit warm, but the ventilation is efficient due to the design.

Something that really disappointed me in this laptop is the speakers. They are really quiet. If you’re working a full load and your fans are acting up, the speakers can easily get subdued. And if you’re watching movies or so, you should make sure nothing very heavy is running in the background.

To sum up, the Asus Vivobook S14 430U is just like any other ultrabook out there. It is practical with its thermal management, design and builds, enough ports, and okay performance. But this is not a very exciting device. I mean, nothing really stands out apart from the efficient heat management design. I cannot help but compare it to the Acer Swift 5, mostly because of the similar prices. And to me, that stands out because of its featherweight, while doing most things similar to better than this one.

If you get the SSD variant, you will like it, though. This is a laptop to get if you’re an office worker yet have to move around mostly. It is not suitable for content creators, though because of the display, but for the regular layman who wants an ultra-book, you can go for it.