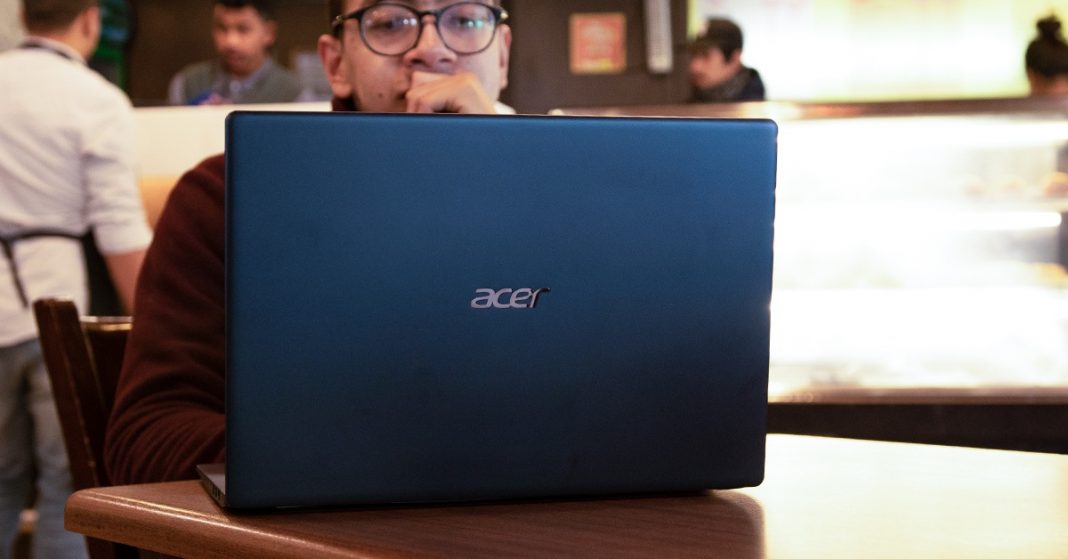 If you, like, are a power hungry user, then, you probably don’t get all the hype with ultrabooks. But when you get your hands on something as light as the Acer Swift 5, you might easily change your mind. This compact laptop is very lightweight – to say the least. It is actually lighter than your notebook – the one that you write on. You can barely feel it in your backpack when you carry it. And if your dog was a good sport, you could probably play fetch with this thing!

Of course, all ultrabooks are not as light as this one. The Acer Swift 5 2018 is as light as they come. And it you’ll be forgiven for thinking this thing might be missing something on the inside when you hold it. And in a plethora of ultra-portable laptops, this one is even more portable. But what else does it pack beside its feather weight?

The design on this laptop, though, is like any other ultra-book out there. It is very slim at 15 mm, sleek and has good looks. The soft rounded edges on a full matte texture make it look like your regular business notebook. The Royal Blue color looks good too, but the golden hinge looks a bit odd, though. The texture makes it prone to finger-prints and smudges, and they can be very difficult to clean. So, it is safe to say that this does look like any other ultra-book. 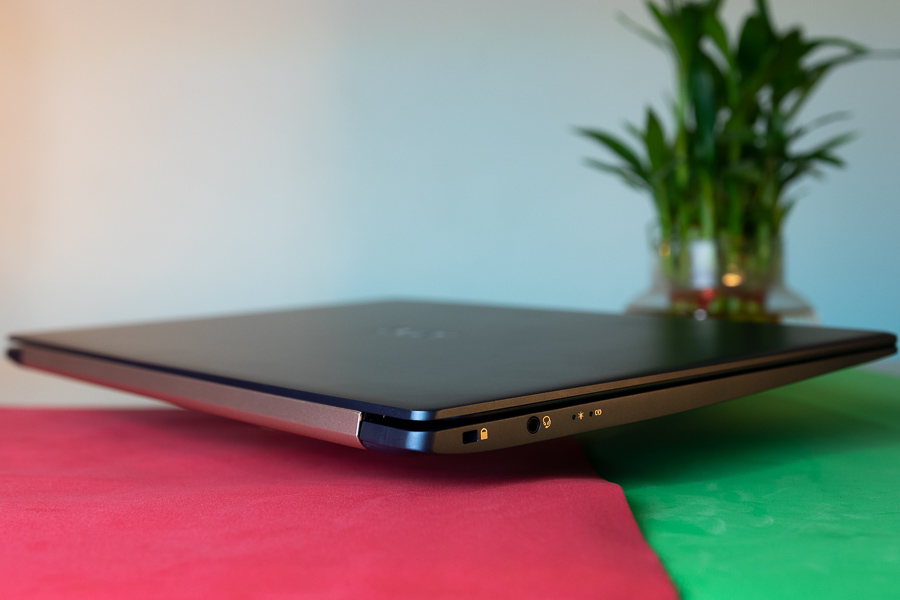 You’ll feel the real difference is when you lift it. At 970 grams, this laptop is only slightly heavier than the the 12-inch MacBook. And I’ve never carried any other laptop as carelessly as this one just because its super easy to carry. The lightweight is achieved by a Magnesium Alloy construction. With magnesium lithium on the lid and bottom and magnesium aluminum on the inner chassis, the build should be durable. But, there is also a bit of flimsiness, which is not clearly visible but can be felt. 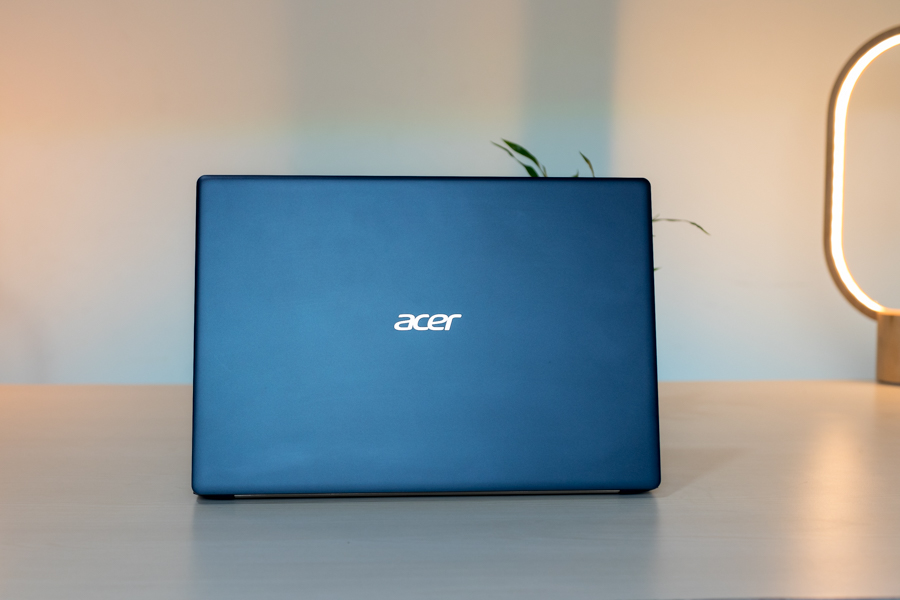 There is a bit of flex on the keyboard area and the lid, but the amount is acceptable. Also, the display flexes easily, but does not really bend to the point of worrying, though. Also, the hinge appears a bit lose when the lid is open, as it can be seen while shaking the laptop. But by the overall looks and feel of it, it can probably handle small drops and impacts. Of course, I wouldn’t go so far as to test it. This laptop cannot be opened with one hand, the hinge seems very rigid at that point. But it does bend all the way up to 190 degrees, and being super compact, it can come in handy while lazying on the couch or so.

What ultra-books make up for in compactness, they lose in the choice of ports. The Acer Swift 5, too, packs enough ports except for an SDCard slot and an Ethernet port. With it’s thickness, it could have fit in an Ethernet port and it also has enough space for a card slot. But this laptop does not have either. Other than that, you get two USB As, one of which supports USB charging. There’s also a USB-C, an HDMI and the charging port beside it. On the left, there’s an audio jack, and two LED lights that denote whether the laptop is charging or in use. The keyboard, overall, is good enough. The chiclet keyboard gives good feedback while typing and good tactility. It’s keyboard travel is not so deep, but the amount is okay for an ultra-book. Also, with enough spacing between keys, it is comfortable enough to type on for long sessions. It has Level-1 Soft White back-lighting, which is also easy on the eyes. So, it is pretty nice to work with in dark environments as well. 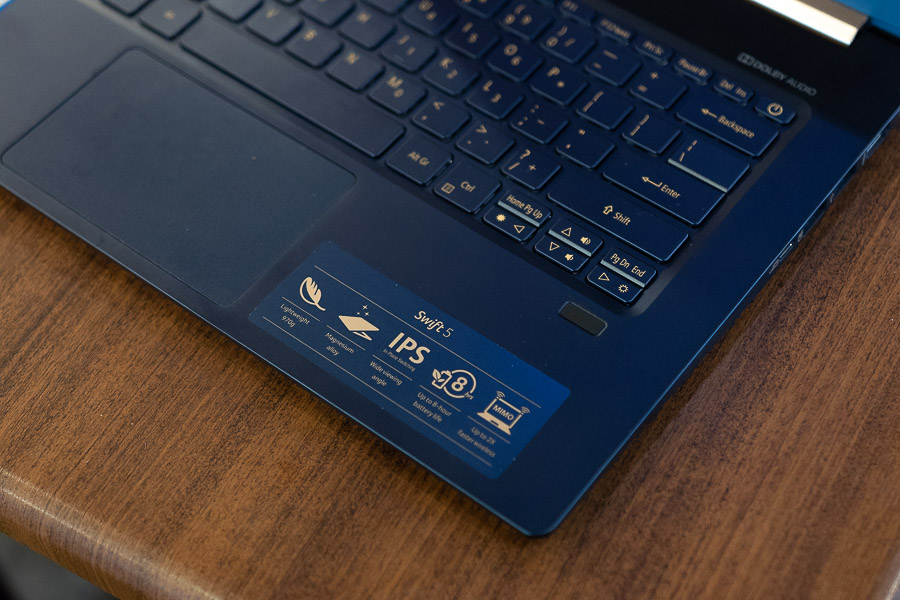 The only problem with the keyboard is the layout of the arrow keys, and the power button. The power button is on the top right corner, and it is easy to mistake it for the delete key. Similarly, the arrow keys are half sized and jumbled up with the Home and End keys. And it is easy to constantly make the mistake of pressing the End key while navigating, which can be pretty annoying whilst working on document or coding, or stuff like that. Another problem is that the Space bar is unresponsive at times when pressed on the side. However, that might not be as big of an issue. A fingerprint scanner on the right, with Windows Hello feature, under the keyboard is also a nice addition. The trackpad is your regular one. It is a bit small on the width, but seems longer on the length. It has Windows Precision Drivers on it. While most gestures work very well, scrolling is sometimes a hassle, as it won’t register your two-finger scrolling at times. Tracking is also not that smooth, but the clicks register nicely, though.

In terms of display, it has a standard 14-inch Full HD IPS display with glossy finish and Touch screen support. The bezels are also thin enough and compliments the screen just right. There’s a web-cam on top, which is again, pretty bad, by the way. The glossy panel means that you will get a bit of reflection on the screen. And the touch sensitivity is also only okay at best. That’s because, sometimes, it won’t register your touch gestures or navigation.

But other aspects of the display are quite good. Colors are sharp, and look vivid on the screen. Viewing angles are also great, with no noticeable color shifts, even at sharp angles. It gives you about 96% of sRBG and some 60% of Adobe RGB. Which means, that it is not a bad choice for editing, but not an ideal machine, however. 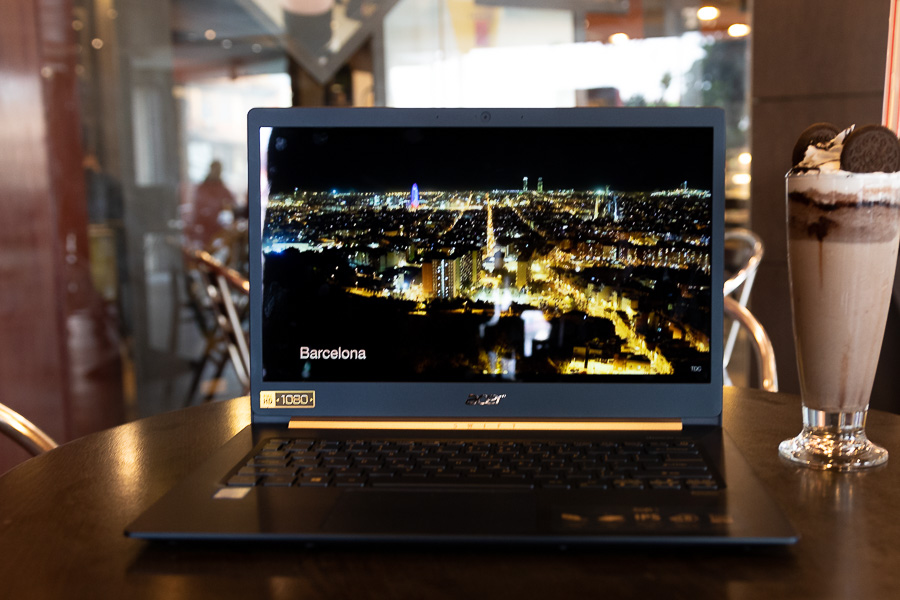 Another disappointing thing about the display would be the low brightness. It can only reach up to a peak brightness of 260 nits, and that’s too low. Dark scenes in movies might be a bit difficult to grasp as well. And while it may not be that much of a problem, working outside or with a lot of artificial lighting around can be troublesome. A low brightness with a reflective surface – you get the point.

As for the performance, as far as Ultrabooks go, this one performs good. It packs the 1.6 GHz 8th-gen Intel i5-8250U processor, combined with 8 GB RAM, and that makes it fast enough. The U-series processor are known for power efficiency and compromise on the performance slightly, but this is to be expected from an Ultrabook. Nonetheless, it will handle most tasks you throw at it.

You can do most things you can do on a normal computer. Browsing the Internet with over 20 tabs open? Check. Adobe Photo-shop, or Light-room? Check. Have like 5 or 6 things running in the background while working? Double Check. Video Editing? Check. It only lags a bit if you’re editing large sized files, but that is to be expected from a power-efficient processor.

This ultra-book does not have any kind of dedicated graphics, though. It has the Intel UHD 620 graphics with 4 GB video memory. And that means you will not be able to play many games on it. Of course, it can handle light gaming, like Dota 2 or CS:GO on medium settings. I tried running GTA V on it, but it doesn’t even meet the specifications for that. So, needless to say, you cannot game on this thing. And it is not actually meant to be one either.

As for the storage, this one has a 256 GB NVMe SSD. If the storage is not enough, you have to opt for the i7 version with 512 GB storage, which of course, is more expensive. The SSD speeds are not very good though. On our test, it only obtained a read speed of 520 MBPS and a write speed of 445 MBPS.

The battery life on this laptop is again, only okay. You get a 36 Watt-hour battery, which Acer claims will last you up to 8 hours. But you can only get up to 6 hours of battery life with normal office work usage that includes light browsing and such.

Now, this is an ultrabook. And I expected it to heat up during heavy work, just because the ventilation on this thing is scanty. A single vent at under the lid, and three small outlets at the back would not make for a very good air-flow. But to my surprise, it did not heat up that much.

When I was playing those light games or editing a video for some time, the fan would make some noise, but it was still cool enough to work with it on my lap. And I didn’t notice a lot of throttling on performance either. So, all good on that department.

So, what can we make of the Acer Swift 5? Honestly, I was not a fan of ultrabooks until I used this one. I also used the ASUS Zenbook UX430U, but that did not appeal to me as much as this one. And I liked this one, mostly, for a single reason – its feather weight. But it is a also pretty capable work laptop and is one of the best option for those who are always running around. If you have a desktop at home, and want a small, compact, lightweight machine for normal workloads for on-the-go, this is something you can highly consider.

The things I didn’t like about this laptop are the keyboard issues, which is but a minor inconvenience. The brightness is a bit too low, and the location of the speakers make them sound not as good as the Stereo speakers should. The lack of dedicated graphics can be a bummer too, but seeing as how this is not a gaming laptop, that is not a deal breaker. Other than that, I have no complaints.

Ultrabooks mostly cost over a $1000, but this one, you can get for some $900 at present internationally. In Nepal, however, it will cost Rs.115,000, and for that…I think the price is easily justified. I mean, of course, this is not your usual heavy worker or a gaming machine. But what it is, is an ultra-light notebook that doesn’t fall short on performance. You can carry it around all day long, and not feel it either. We’ll probably get a 2019 version of this notebook in the coming months, but right now, this is still a great buy.