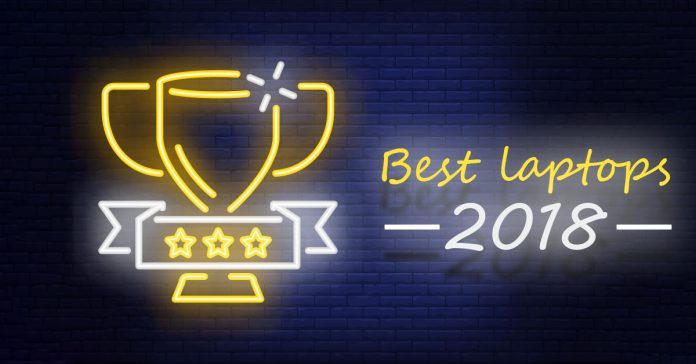 Choosing a laptop is a lot harder than choosing a smartphone. Everyone could just get an iPhone and be done with it if the price wasn’t a factor. But for a laptop, you will still need to look at your needs and what you plan to do with it.

What’s more confusing is there is no laptop that’s just perfect or the best. Most might blame all the RnD that goes into laptops, which is a lot less than compared to smartphone technologies. So, to make it easy for you let’s look at the best laptops in every category. Or at least all of the once we can think of.

Yes, the Dell XPS 13 is the best out there if you want a light and portable, yet a capable laptop. It gets decent specs, but what matter’s more is that form factor. The laptop barely weights a kilogram. It also packs a 13″ display on a 12″ form factor while built like a tank.

Highlighted features include great battery life, a stunning display (or a decent one if you choose FHD), and ThunderBolt 3 support. Finally, considering the design, this laptop spares nothing to complain about. The laptop starts at $949 for the base model configurable up to $1,900.

By editing we mean actual editing of photos, videos, or even music, this one is where it’s all at. Starting off with the display, MacBook Pro 2018 probably has one of the best panels in the business. The performance is also something no one is going to complain about and with MacOS it’s just better.

That is if you like MacOS, which includes Final Cut Pro X to edit all your vlogs. It gets a super fast SSD, up to 4TB of really really fast storage. The dedicated GPU options are also pretty decent as well. Prices start at $2,399, and who knows how much the highest specs model costs.

If you are a student, I will just assume you are broke and have very less money to spend. But the pursuit of knowledge should not be limited by your bank account and Microsoft knows it best. The Microsoft Surface Go starts at a staggering $399, which can be considered cheap but not substandard.

If you are an actual student, you also get special discounts on the product. As for the features don’t expect much, it’s get’s a detachable keyboard and a workable processor. Storage options are also not that exciting, while the display is just 10-inches. On the upside battery life and portability is great.

For $399 however, you are basically get nothing. It’s still usable but you will need to shell out a bit more for a type cover. It gets a touch display, so you can probably live without a keyboard until you can save up for one later. Did I mention the Surface Pen support? Sold separately of course.

No, it’s not a tablet, it’s an iPad Pro 2018, with even smaller bezels and a keyboard. Most people might feel that an iPad just isn’t enough to replace a laptop, and we agree. But it also very much depends on what type of a person you are.

I can see a lot of people who would benefit from an iPad rather than a laptop. If all you are buying a laptop for is emails, media consumption, creating presentations, or just editing docs, then by all means. But the main reason could be the ease of use.

Apple has been heavily marketing it as a laptop replacement. Rightfully so, they are a lot faster than most laptops with a better display. They are also a lot simpler and saves so much time off of troubleshooting. Just think of what you need a laptop for before you spend that $799 or more.

We all have that group of friends that meet once every week for a night of drinking and gaming. If you are in one of those groups, well you might have faced one severe problem, taking your gaming rig to your friend’s house. A desktop is out of the question, a bulky Alienware just seems stupid and a Razer Blade stealth is, well it’s the desktop problem all over again.

Answer? The Gigabyte Aero 15, the perfect blend of portability and power. It gets great internals as one gaming laptop should. Add a 144Hz display to the equation and judging by the types of games you will be playing at a LAN party, you will land at an advantage more often than not.

Plus, since it’s a LAN party, a dedicated LAN port never hurt anyone. This laptop also has a relatively big battery too. The only problem you might face is its availability and after sales service. Pricing starts at around $1600 for models with Intel’s 8th Gen CPUs.

The best of both worlds: Razer Blade Stealth 2018

Gaming laptops aren’t always huge and bulky. Sometimes, they come in a small, thin & portable package, and the Razer Blade Stealth is just that. The 2018 version just improves on it more making it a more complete package.

The recently released model gets the latest gen specs as well as a design overhaul. The laptop is a bit pricey but you are getting native support for external GPUs which unlocks all of its gaming capabilities. The laptop gets a four core i7-8565U processor which, in theory, should handle up to a GTX 1060 without bottlenecks.

The other compelling factor is the design, with its new boxy design update, the same as on all other 2018 Razer laptops. But what’s even more impressive is it’s a lot more stealthy now, “office-friendly” if you can call it that.

The delightful design-overhaul means people can use it for gaming and take it to office presentations without a second thought. Gone are the days when you had to cover up that green three-headed snake, those unbearable display bezels, and it’s just so uninspiring curved edges. This is the new Razer Blade Stealth and it starts at $1,399.99.

Believe it or not, there are people who don’t think 60fps is enough. They live for higher refresh rates and anything over 7ms is a joke. You guys are probably better off with a desktop but if you want a laptop, the Alienware 17 should do you justice.

The name should be enough for anyone who wants an overkill sort-of portable gaming machine. But let’s jump into the specs. Starting things off with an 8th Gen Core i9-8950HK processor, this beast of a laptop does 4.8GHz on a laptop, with room for overclocking.

With an overclockable Nvidia GTX 1080 with 8GB of GDDR5X GPU, the laptop is a metaphorical beast. The display includes a 4k 17-inch panel with G-Sync enabled and low latency figures. This laptop comes with a maximum of 32GB of dual channel memory.

As for storage, you get three storage devices, two PCIe SSD slots and one spinning hard drive. Add a Killer 1550 Wi-Fi card and RGB lighting sprinkled everywhere you are just ready for gaming. Few final touches include a great selection of I/O, including a proprietary external GPU.

Equipped with a battery that barely fits the legal flying norms, you still can’t expect decent battery life form this one. Finally, it also gets the Tobi Eye tracking feature, probably a gimmick but hey, we get it. A fully specs out version of this laptop will cost you just under $6000.

No matter if you are a designer, editor, light-weight gamer or just an average user who just wants to Netflix and chill, the Dell XPS 15 can do it all. It features one of the best display in the market, the performance is nothing to complain about, and it’s built like it could take a beating.

The GTX 1050 Ti is a great graphics card but if you are a more serious gamer, you might want to look at something with a better thermal performance. But that’s the only thing this XPS falls at, apart from that it leaves nothing to be desired.

If you do not fall under any of the above categories, then this is it, granted you have the budget. The XPS 15 does everything well, for a price. It starts at $999 for the most basic configuration, but if you can splash in the cash, you are definitely in for a great experience. There is an option for an XPS 15 with a 360-degree high if you are into that as well.

If you look at all of the laptops in this list till now, most of them are pretty expensive. Apart from the one for students, most are pretty much at the top of their game, and for good reasons too, if you choose the one for your needs, you won’t be regreting much. But since we are considering all of the categories, it would have been incomplete without a budget laptop.

While the word “budget” means different to different people, we will look at one that you can buy just under $400. That’s the Acer Aspire 3, with it’s 8th Gen Core i3 processor, a full 1TB hard drive, 6GB of DDR3 RAM and a 15.6″ FHD display. This laptop is one of the best laptops you can buy for a lot of reasons other than the specs.

For a budget conscious buyer, you will be looking at good specs for sure, but reliability matters as well. Since it’s an Acer laptop it’s service centers should be available, in the terms, everywhere. M of my friends own this laptop and they have never had any problems with it.

That might sound like an obvious statement but I have heard most of my colleagues complain about their XPS more than I have heard about this laptop. The display is also pretty great since you are getting an FHD panel. So, if you want a laptop on a budget that actually performs decent and is reliable to an extent, well this is it.