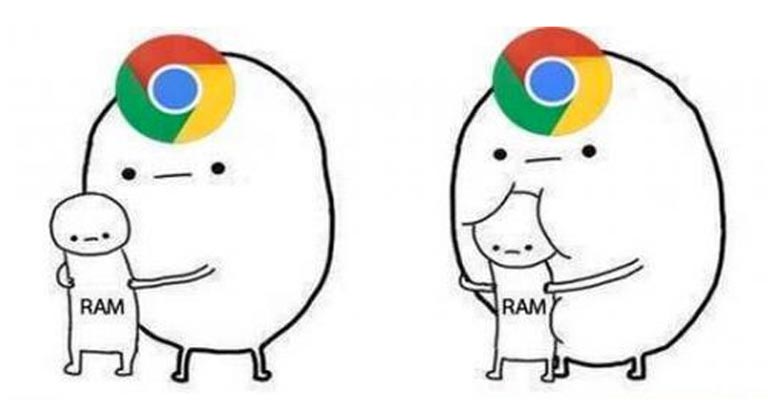 While Google Chrome is the most popular web browser right now, it is also among the heaviest ones out there. It has a reputation for being a memory hog. The developers are well aware of this and are working continuously to make the browser more efficient in memory management. Their latest effort comes in the form of Chrome 89. The latest release of Chrome makes use of some advanced memory allocation techniques to improve the user experience. Learn about it in detail in this post.

According to the official Chromium blog, the new version of Chrome saves up to 22% memory during the browsing process on the Windows platform. Similarly, it also results in 8% memory savings in the renderer, and 3% in the GPU.

The reason for these above-mentioned improvements is PartitionAlloc. It is a memory allocator that focuses on low latency, security, and space efficiency. It’s not the first time Google has implemented it in its product. Up until now, it was being used in Blink – the rendering engine for Chromium. The Chromium is an open-source project which forms the foundation of several popular web browsers including Chrome and its rivals such as Edge and Brave. The way it works

In case if you are wondering how it works, let me explain you in simpler terms. Objects in modern computing devices are stored in different heaps which can be allocated, deallocated, and reallocated as per the need. Different heaps are stored in different memory locations which causes the partition of the memory. At times, these partitions can be outspread. PartitionAlloc improves the performance by aligning objects with partition with similar-sized objects. This results in fewer fragments and an improved memory footprint.

Now, that PartitionAlloc has been integrated into the browser, Google is hopeful that users on Android and Windows (64-bit) platforms will feel the difference. On the other hand, if you are a Linux user you will have to wait a little longer to get the update.

Similarly, Chrome is now even smarter when it comes to using and discarding memory. With the new update, your Chrome can now reclaim up to 100MiB per tab. That’s almost of 20% of some of the popular sites. For this, Chrome loads memory off the foreground tab that is not using at the moment. For instance, Chrome will discard big-size images that you have just scrolled-off screen.

For mac users, Chrome is even reporting up to 8% memory savings up to 1GiB. Chrome has pulled this off by limiting memory for background tabs. Such a technique was already being used in other platforms and is finally available in macOS. Similarly, Chrome has announced that it has recorded up to 65% score on Apple Energy Impact using the tab throttling for background tabs that was included in Chrome 87.

Google has also made changes to the build, packaging, and runtime performance of Chrome. The company says that these changes have resulted in fewer crashes due to resource exhaustion. There are 5%, 7.5%, and 2% improvements in memory usage, startup, and page loading, respectively. The PlayStore can now generate and install optimized APK for each device along with the main base APK. Also, these split codes and resources can be loaded for a faster startup in Android O using the isolatedSplits feature.

Lastly, there is the Freeze-Dried tab that allows Chrome to load 13% faster. These are light versions of tabs (size similar to a screenshot) saved by Google to use at startup while the actual tab loads in the background.