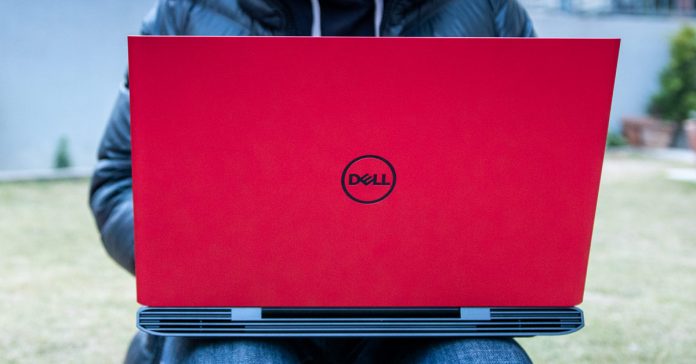 Dell’s G-series laptops are all about core performance, and also those muscular looks. With the Dell G5, the company provides you with a gaming laptop that just works, without any fancy additions to it. It has everything you need in a gaming laptop but falls short in some aspects. But then again, there’s not much to complain about. You won’t love it; you won’t hate it…you’ll find everything just okay. Right of the bat, the design of the laptop screams “gaming”, with its muscular looks and that red accent all around. That is pretty old school, and on first glance, you might not be able to tell the difference between Dell G5 and or a Dell Inspiron 7577. Some might find this design boring, but it looks okay to me. There are two color options available, the black one, and this red one. This one looks a bit too flashy and intrusive. But that is all about personal preference. 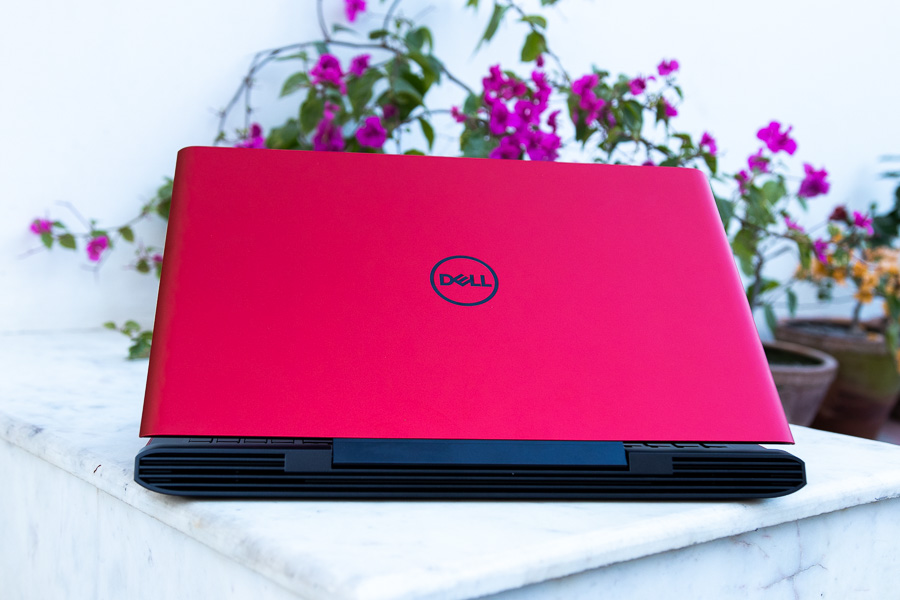 The laptop has pointed but slightly curved edges, which gives it a bit of a different character. The back houses large air vents while the front has the same gilled design, and when closed, it resembles a sports car, just like the Dell G7. 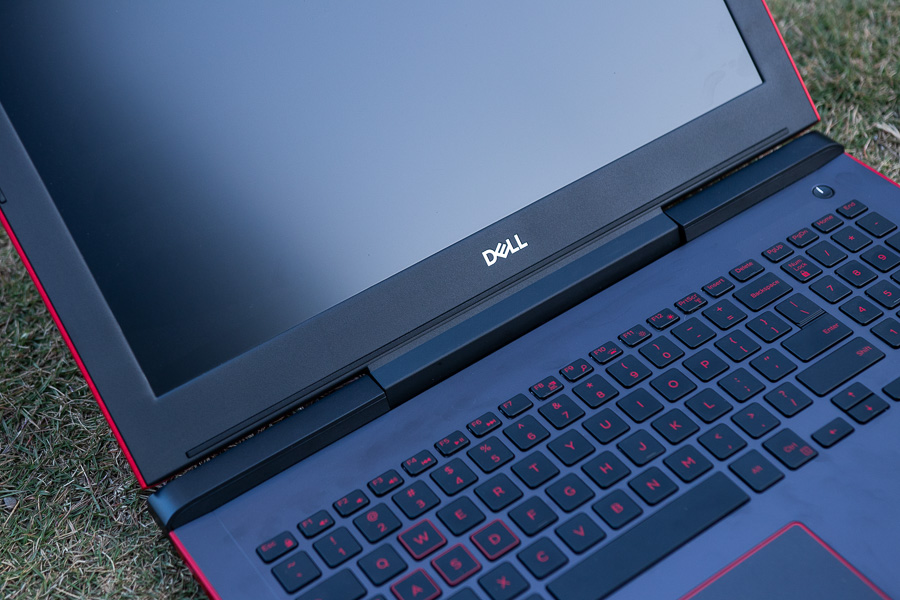 The build is very impressive. The chassis is metal, but the lid and back plate is plastic. It appears very sturdy overall, and there is no flex whatsoever on the keyboard deck when pressed. The hinge at the middle is sturdy but flexible enough to allow you to open the laptop with a single hand as well. And to me, that’s a big deal. The only inconvenience is that the top lid gets smudged very quickly, and is difficult to get rid of.

Overall, the design is that of a typical gaming laptop.

Again, the display in this one is just okay.  First off, the thickness of the bezels surrounding the 15.6” screen seems ridiculous. It feels like the bezels are there to compensate for the large form factor of the laptop. They just seem redundant, and it feels as if the designers at Dell threw it in just because they could! 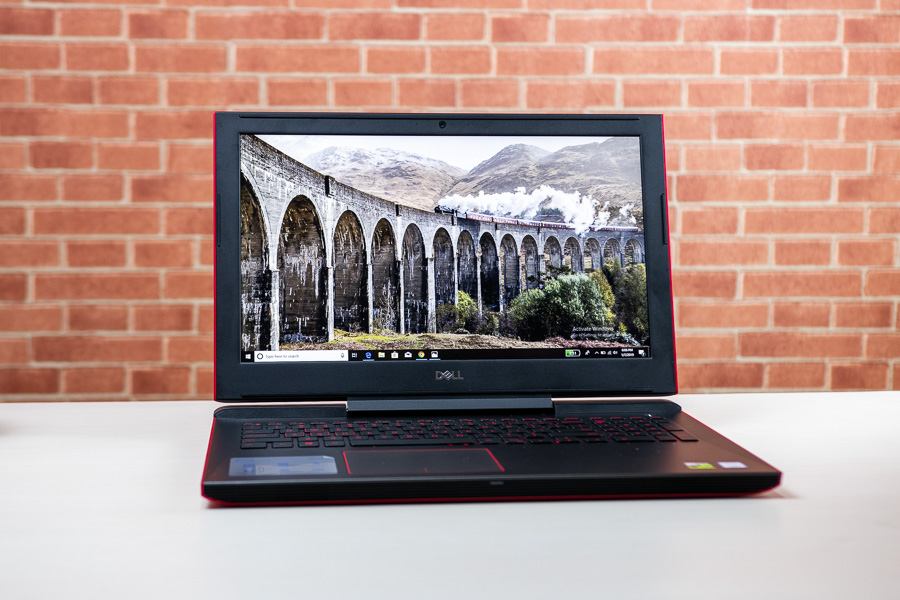 The screen is a Full HD panel and 60 Hz display, with very average quality. Viewing angles are also okay, but you will notice slight shifts at extreme angles. The display, overall, appears dull, because…well, it has low everything. A low brightness of 219 nits maximum, low 58% standard RGB, low 44% NTSC Color Gamut Coverage and low 46% Adobe RGB.

So, needless to say, this laptop is NOT for content creators! But of course, you won’t have any problems with gaming. I guess the Dell G-series is designed to be this way. The G7 was this way, and the G5 is the same – actually worse. This feels very gamer-centric. Because with such display quality, even multi-media is just going to be pretty average.

The display is not as bad as on some budget gaming laptops, but this is not like a good display by any standards either. So, yes, the display is average as well. The keyboard is good, too. It is a well-built keyboard, feels robust and the keys are well stacked. There’s 1.4 mm key travel, which is good enough. The key presses are responsive, with clicky feedback, which is great. The only problem is the small arrow keys.

There is red backlighting on the keyboard, and that is as intrusive as overdone. The red can be very overwhelming on the eyes, and even with the backlighting off, the red lettering makes it a bit difficult to see in the dark than white lettering. As for the trackpad, the size is nice, and with Windows Precision Drivers, the tracking was fine. Gestures work every time, too, and this is If you’re coming from a Dell 7567, you’ll feel right at home.

The Dell G5 comes in two different configurations – one with an 8th-gen quad-core Intel i5-8300H and another one with the 8th-gen Hexa-core Intel i7-8750H. Our unit is the latter with 6 cores and 12 threads. And of course, this is a pretty fast processor. You might know about this processor quite a bit, so, I guess, there’s not much to say in this regard. Just for the record, this is a great processor. 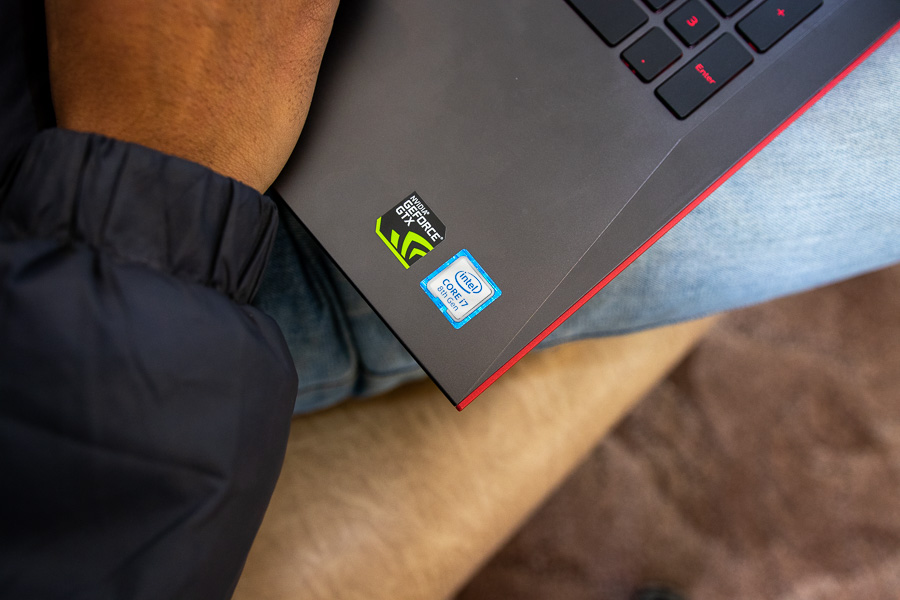 However, this laptop has 8 GB of RAM at 2666 MHz, which is very basic for a gaming laptop. Now, the problem is not the size of the RAM as much as the configuration of it. You have two RAM slots, and so, you get two sticks of 4 GB RAMs, in it. So, if you want to upgrade, you have to replace both RAM sticks to get the sweet 16 GB. And that’s very inconvenient.

As for graphics, too, you get two configurations as well –  a GTX 1050 Ti with 4 GB VRAM or a GTX 1060 Max-Q. Now, those are both very middle of the line for gaming. And at this price point, this is a usual dilemma for buyers – you have to choose between a better GPU or a better CPU. And our unit came with a GTX 1050 Ti. So, the gaming experience is also pretty average. 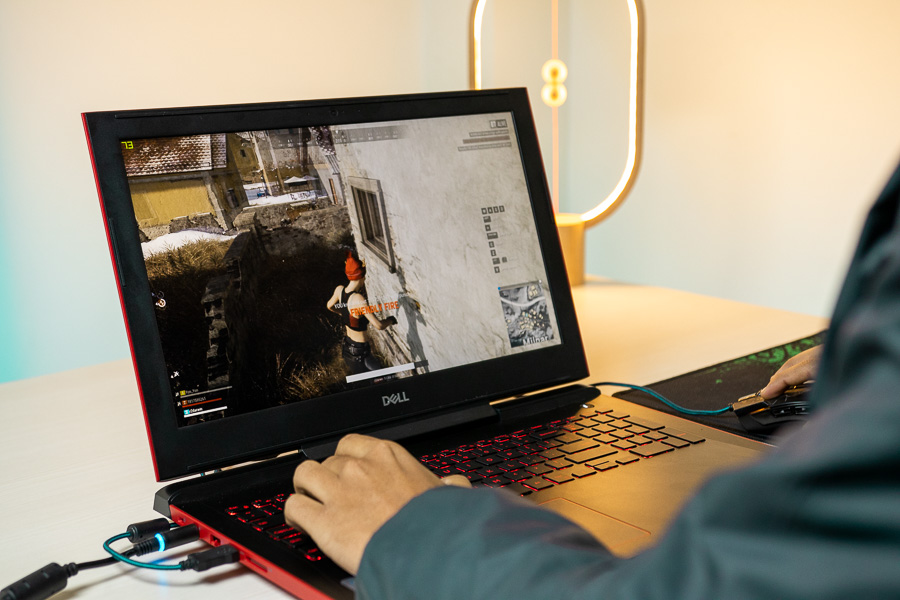 FIFA 19, which is not a very graphic intensive game, averaged on 80 fps on ultra-settings, but there were some choppiness and stutters. Similarly, CS: GO gave us about 80 fps easily with slight stutters.

DOTA 2 crossed 100 fps at max settings, which is nice. As for PUBG, the game ran at about 50 fps with slight lags and stutters at default settings. You have to keep the settings at the lowest if you want more frames. And you don’t wanna know, how it does at maximum settings. Games like Dota 2 and Paladins are not as fun to play, in the 60 Hz screen. The gaming performance is okay, its just the screen can sometimes freeze for like a second as it cannot keep up with the fast-paced games.

So, this thing can run almost all kinds of games, but you’ll have to trade between good frame rates or smooth performance. So, again, another average score in performance.

As for thermals, the large air vents do their job. The laptop never heats up to the point to make it uncomfortable to use – even while gaming. There is very less thermal throttling, even after an hour of gaming. You might notice around 10% of the drop in frame rates after that amount of time, but nothing that will hamper your experience.

As for storage, you get an NVMe M.2 128 GB SSD, and a 1 TB HDD. The SSD space is quite small, but that is why the HDD is there to compensate for that very fact. But the SSD speeds reached only over 500 MBPS for reading and only about 150 MBPS for write, which is really slow.

For the battery, you have a 56 Watt-hour battery, which is very gaming like, I guess. But the battery lasts an impressive 4 and half hours on light or regular usages like editing documents and streaming videos. And that is pretty good for a gaming laptop. While gaming, however, it lasts some 1 and a half hours, but you wouldn’t want to do that, because gaming on the battery will give you a sluggish performance.

There are enough ports on this laptop as well. On the left, you have a charging port, an Ethernet port, a USB A and an SDcard slot. On the right, you get an HDMI, a USB-C with Thunderbolt 3, two USB As and a 3.5 mm headphone jack.

The webcam is just like 90% of the other laptops out there.  It is grainy, blurry, and not very good. But nobody complains about the camera on laptops anyway, so, no point talking about it.

The speakers of this laptop are also only decent, as there is no bass. But it can only do so much without a sub-woofer in it.

In conclusion, the Dell G5 is a pretty average laptop, with the word “average” being the key here! But if you look at all the aspects of the laptop, you will see for yourself.

The design is just like any other gaming laptop – it screams gaming. A large muscular body with a red accent which is not shy about its appearance. The display is the same, too. The performance is what you get for the money – it is powerful for normal usage, but very average for gaming, with the middle of the line graphics and a standard 60 Hz display.

For a price of $950 or Rs.133,000 here in Nepal, this is actually pretty solid. It is functional and will not disappoint gamers. And at this price, there are very few competitors of this one. At least, not any which we’ve reviewed until now.

But in the same price category, there is the Dell G7 as well – which is basically the same laptop, with very slight changes in design. The G7 belongs to Dell’s 7000 series whereas the G5 falls to the 5000 series. I don’t know if that makes any difference to you, I’m just putting it out there. Also, the G5 is slightly cheaper than the G7.

You get similar specs in the MSI GL63 8RD with a slightly better display, and also in the ASUS FX504. But we haven’t tested them, so can’t vouch for them. What we can vouch for, however, is that the Dell G5 is a good gaming laptop for the price. Of course, I wouldn’t recommend it to any content creators. This is just for gamers, who are looking for a good unit under Rs. 150,000.