When Dell did away with its entry-level Inspiron gaming laptop line and introduced the Dell G-series laptops, we didn’t know what to expect. However, we’ve come to expect nothing but close to best, if not the best from Dell laptops. And with the Dell G7, it introduces something that is all about the core performance!

The Dell G7 has a fresh design of its own. And while we were in a sea of those plain silver or black or black and red colors, it provides a new look to your laptop with its two colors: White & Blue and Black & Blue versions. While the White and Blue looks stunning and seems to be everyone’s hot favorite, we decided to go with the Black & Blue version. It might not look equally good, but it’s a nice one, nonetheless. 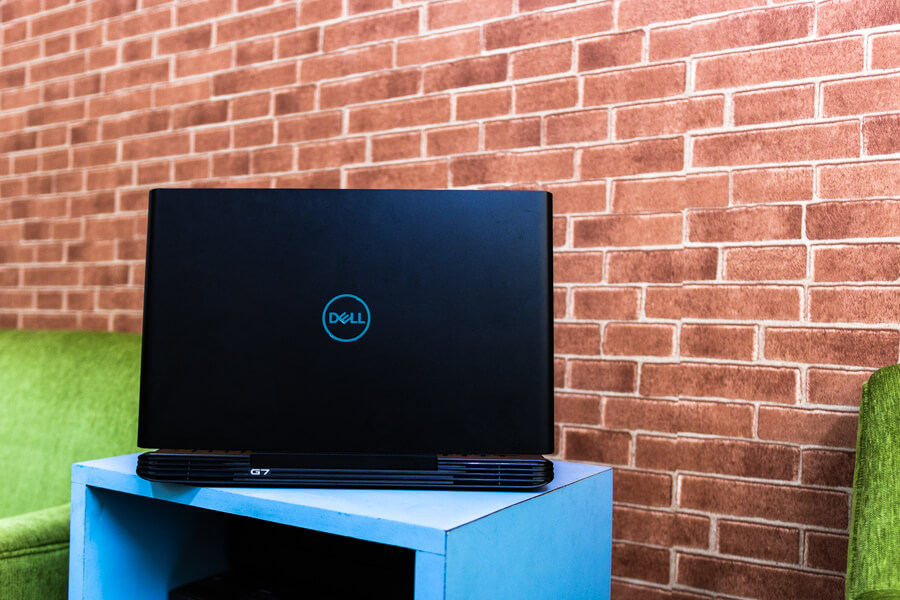 The aesthetics of the laptop give you a “gaming” vibe. With sharp edges all around and vents at the back which looks like the hood of a sports car, it has a sporty design overall. It is built out of plastic but is quite durable. It is also bulky due to the large fans at the back that blow out hot air. But the large fans do a good job of keeping your laptop cool. It is also considerably heavy at 2.6 kg. However, it’s still portable, but you might have problems carrying it around all day long.

The display is where the laptop falls short. It has a 15.6” Full HD (1920 x 1080) display panel. The quality is pretty decent, but you will notice it is missing something. It has a 60 Hz refresh rate, but, you can also over-clock it up to a 100 Hz. However, that has to be at your own risk, as it has a chance of damaging your screen in the long run. Also, the color reproduction is just okay. It can reproduce only 73% standard RGB and about 56% Adobe RGB color space. The numbers are disappointing, and gameplay is also somewhat affected. But even so, it won’t make that much of a difference as you’ll be too busy shooting down enemies to notice such subtle differences. 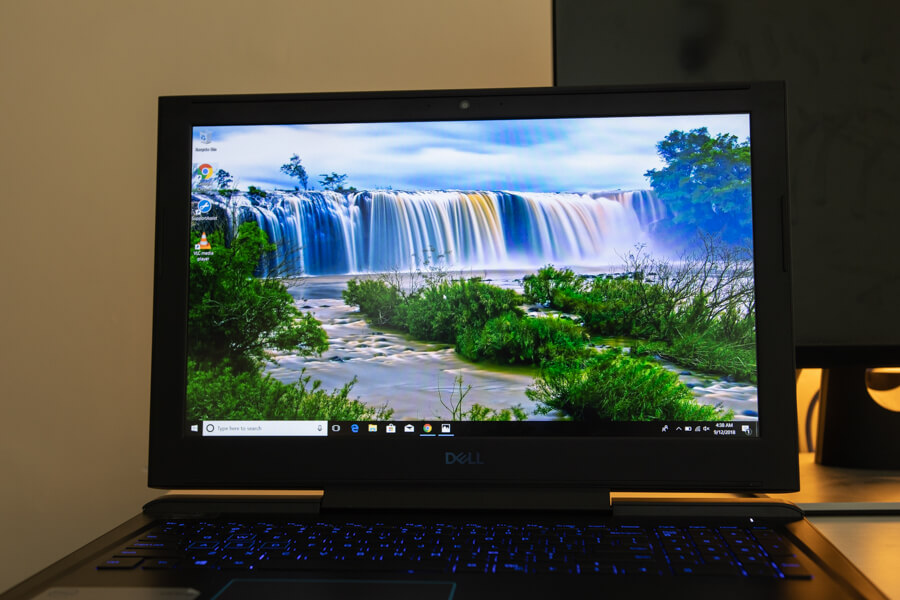 Another thing that is off-putting is the huge bezels around the sides. Even with a large form factor, the screen doesn’t appear as big as it is. The 15.6-inch screen is definitely big, but with the large bezels, the screen appears small and is also quite distracting. So, your movie experiences might not be good enough. Overall, the display seems to be intended for gamers, and if you’re looking for something to create content like a lot of video editing, or designing, this one is not for you.

In terms of hardware, the laptop has an 8th-gen Intel i7-8750 6-core processor with clock speeds of up to 4.1 GHz with Turbo Boosting. Now, this one is a very capable processor, and there is no doubt about its performance. It is supported by 8 GB of RAM, which is good enough for everything else, but you might want to consider expanding it to 16 GB for a sweet gaming experience. The standard model does come with a 16 GB configuration, but the one we got only had 8 GB of it. With only 8 GB, there will be some stutters with heavy games. You can also expand this to 32 GB, but I don’t think that is really necessary. 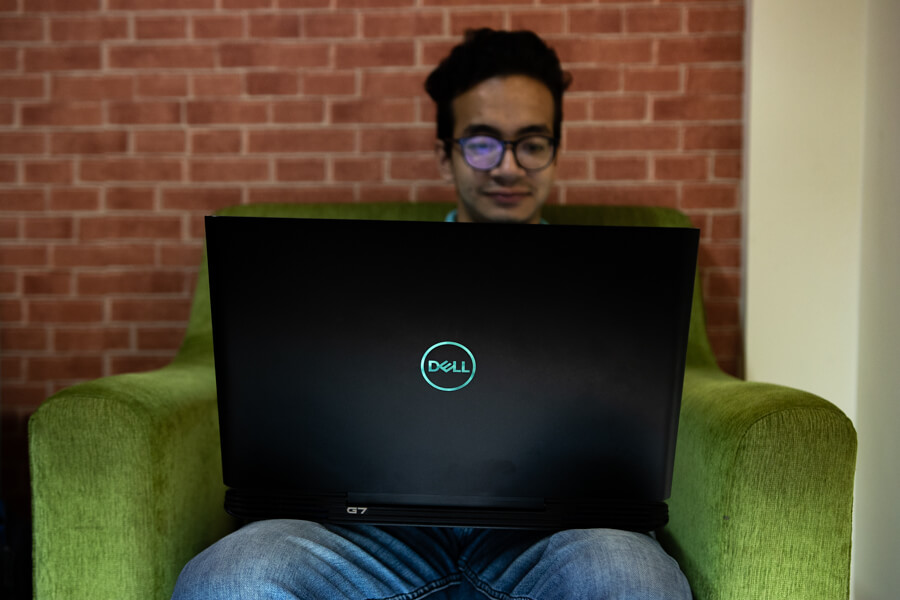 But the worst part about upgrading the RAM is that it has two slots with two 4 GB RAMs, and if you want to upgrade it, you either have to get a new 16 GB unit or replace both of them with 8 GB units.

As for graphics, you get a 6 GB NVidia GTX 1060 Max-Q, which is a respectable graphics card. It gives you better performance than the 1050Ti but falls short from the regular GTX 1060. Maybe they could have fit in a regular GTX 1060, but I actually have no complaints about this whatsoever. You can still play all the modern games in Full HD and Ultra settings and still get good frame rates. And the GTX 1060 Max-Q actually heats less than the regular 1060, which makes the choice of graphics card a good one! 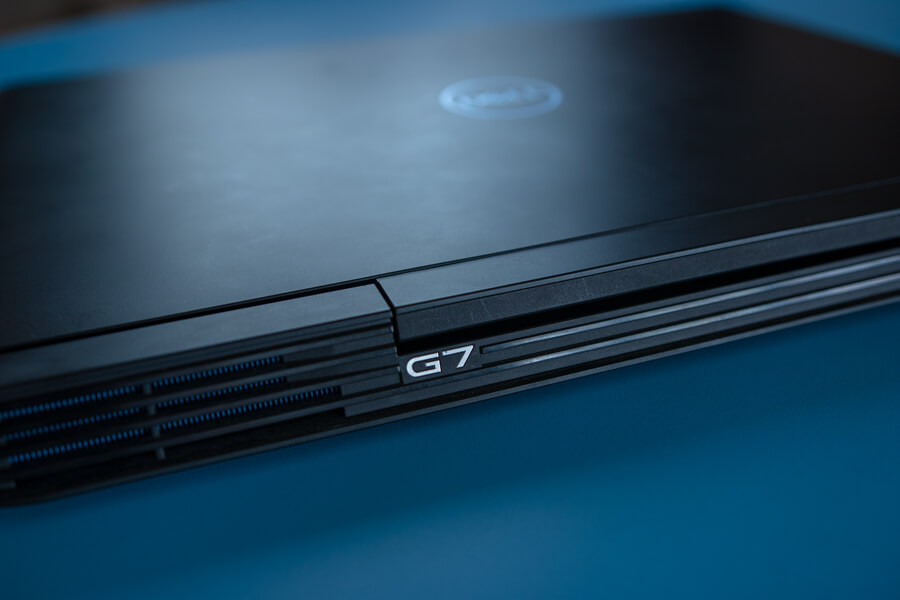 There’s less thermal throttling, and the laptop doesn’t heat up that much. This is the good thing about those large fans, and they are also quiet enough to let you game without getting annoyed. This laptop also packs enough power to let you use any kind high-end video editing or designing software, but its display is not suitable for such.

Now as it is with laptops, there are multiple configuration choices. Our particular unit features an M.2 256 GB SSD storage. And I don’t know why but in our tests, it was only able to provide 500 MBPS of read and 300 MBPS write speeds on our tests. Now, these are very disappointing figures from the last generation, as the last ones had really good SSDs with read speeds up to 2800 MBPS and write speeds of 1200 MBPS.

The speed on this one is comparable to that of Dells’ 2nd – gen 7567 model’s SSDs. Now, I’m just comparing the speeds with the other SSDs in numbers. You will not actually feel it suffer from slow speeds in normal usage. Actually, you might not even be able to tell the difference, except feeling a tiny bit of sluggishness. On the battery front, it only has a 56 Watt-hour battery, which is adequate, but for a gaming laptop of this size, it feels small. Looking at its size, it should be able to fit in a larger battery, but it doesn’t. I got around 4 hours of battery life in average usage, which is similar to that of the Inspiron 7577.

The keyboard gives you a good typing feel. It has only 1.4 mm key travel, but it is comfortable enough. The keyboard feels good, but it misses out on the tactile feedback. So, you will find that it’s not as good as some other gaming laptops. It’s got this blue backlight with blue colored fonts, which adds to its cool serene looks. But it also puts a bit of strain in your eyes during prolonged usage, especially at night. 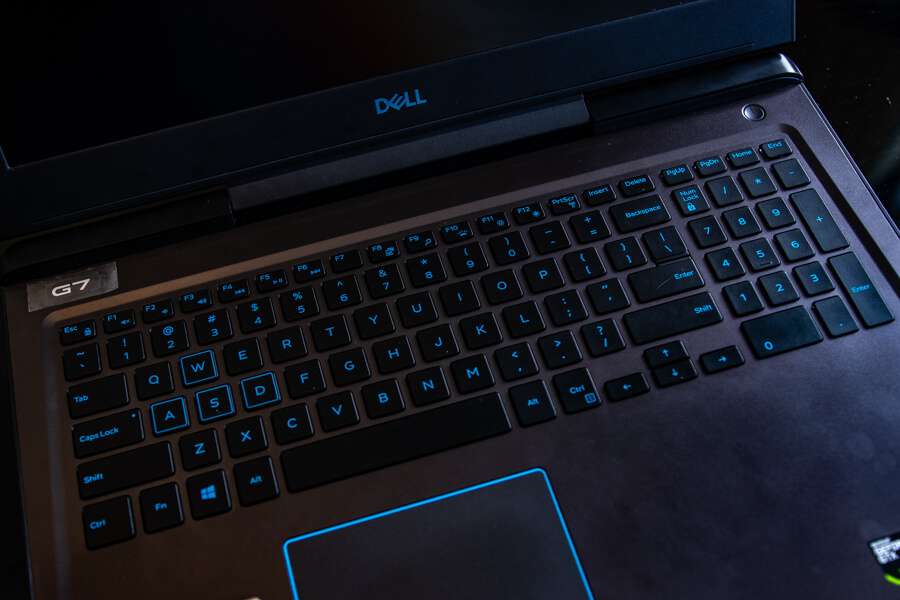 The 4.1 x 3.1 inch trackpad is large and comfortable. And with Windows Precision Drivers, it works much better than other proprietary trackpads. However, its plastic build does affect the precision somewhat in overall usability, sometimes not being able to detect certain gestures like pinch-zoom, three-finger touch, and flick, etc. But it worked most of the time, and for me, it was good enough.

The large laptop body features all the ports you could want in 2018. You get three high-speed USB 3.1 Type A ports, an HDMI 2.0 port, a headphone jack, a 2-in-1 SD card slot, a Noble-lock security slot, and a Gigabit Ethernet RJ-45 port. This laptop even features a USB-C port with Thunderbolt 3 support, and it’s actually a pretty nice feature to have. 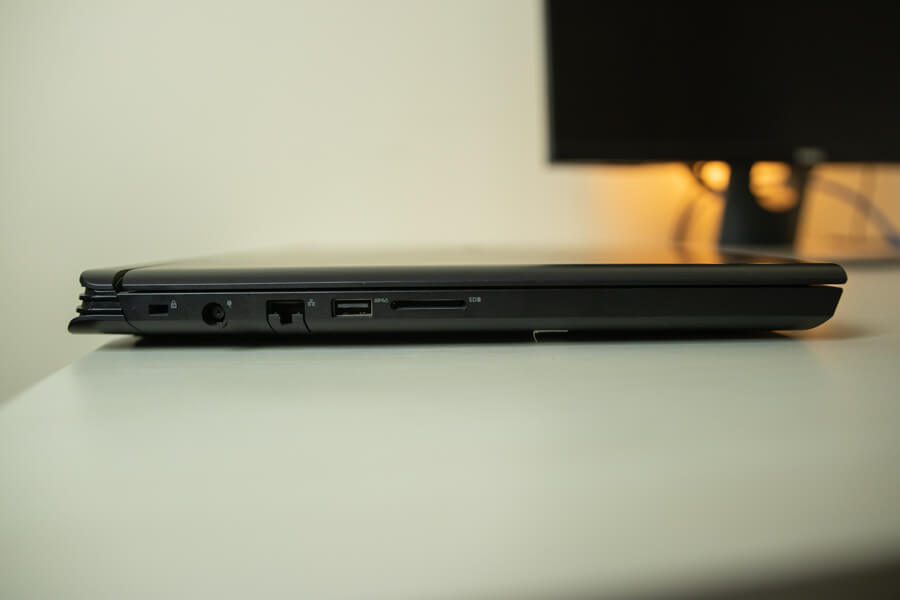 The speaker audio quality is above average. The front-facing speakers do a good job of providing you a loud and clear sound. And it can also catch those subtle sounds of footsteps or such while gaming. However, the webcam is pretty bad. It captures noisy pictures and videos, and you wouldn’t probably live stream with this webcam. But it is good enough for other social media usage.

All in all, the Dell G7 gives you what it advertises, and that is core performance. The processor and graphics provide a good gaming experience, even though the RAM is not quite enough. And the worst part about this laptop is the dual RAM channels. This makes upgrading it’s RAM quite expensive, and frankly, a hassle.

Also, the display is not quite good for the multimedia creation or viewing. And the wide bezels add more to its woe. The Dell G7 cut corners with the display mostly, but, I have no complaints on any other aspect. It seems to me that Dell only focused on the gaming performance and didn’t put much emphasis on other aspects, but for the price that I got it for, it actually makes sense.

This unit came from the US directly, so, it cost around Rs.1,26,000. But the same model goes for some 145,000 in the Nepali market. Considering the 1,26,000 price tag, this is a good deal, but for 1,45,000, there are some other options you can explore like the MSI’s 8th gen offerings or from Acer as well. Overall, The Dell G7 is a good buy for budget-conscious gamers, but I’d recommend you to get the 16 GB RAM variant as the 8 GB won’t really be enough and it’s pretty hard to upgrade.