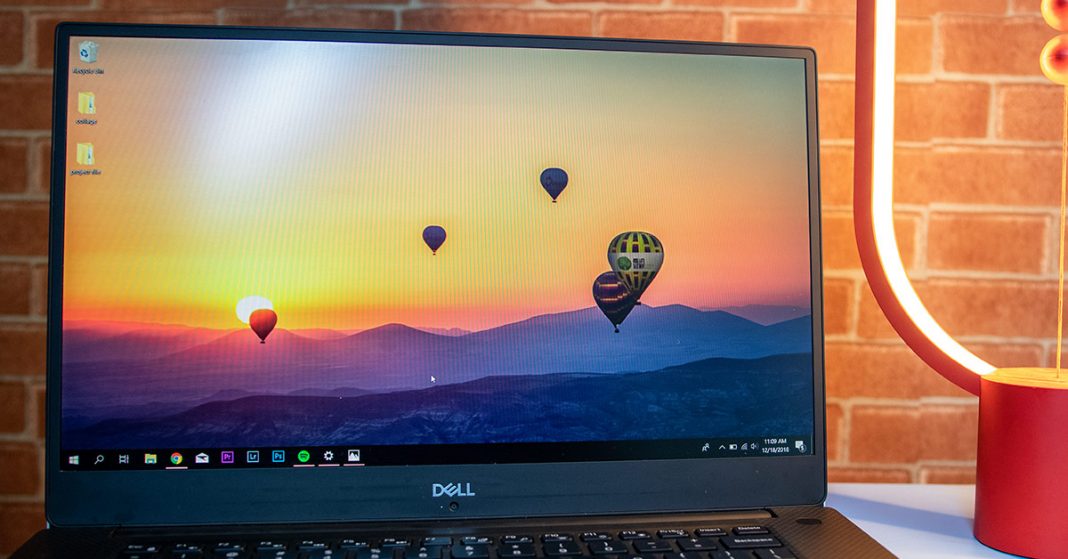 If you put all the generations of the Dell XPS 15 laptops side by side, do you notice any difference? No, right? They all look the same. It is safe to say that the XPS series are Dell’s most desirable laptops. They are slim,sleek, lightweight and at the same time, known for the power they pack. The XPS series belong to a class for their own. But looking at these, it seems as if the designers at Dell don’t really have to work that hard.

We’ve been seeing the same old classic design from all generations. The same aluminum and carbon fiber chassis keeps the laptop sturdy. And judging by the heft and feel, it feels like even if you drop it accidentally, nothing bad is going to happen. Also, the aluminum blends into the carbon fiber seamlessly. Plus, the carbon fiber is coated with a soft-touch surface that give a nice smooth feel on the surface all over.

The only complaint on part of the design is a bad placement of the webcam inside. The position of the webcam is awkward. It has shifted to the center in the 9570 from the left in 9560, but it is still an awkward position for a webcam. The quality of the webcam is okay though, and it seems they’re actually same in all the generations.

The bad webcam placement is because these laptops have very thin bezels around the screen,which is one of the best things about them. There aren’t much changes in the XPS laptops externally. The 9560 had a fingerprint sensor under the keyboard deck. And in the 9570, it is embedded in the power button itself. Besides that, everything looks pretty much the same.

The biggest change in the 9570 is, of course,the processor. It has the latest 8th generation Hexa-core Intel i7-8750H processor. The major difference between this and the older models is that it has six cores over the quad-cores on the others. This means that it can give you up to 50% faster speeds in multi-threaded tasks.

That helps the performance by a lot. You can have as many tabs open in your browser or be doing quite a lot of tasks at the same time. Yet, this laptop can perform as smooth as butter. Heavy applications, like that of the Adobe suit, run without any kind of stutters too.

You can also opt for an 8 GB variant and a 32 GB one as well. But 32 GB RAM is a bit of an overkill, while 8 GB is not quite enough for a laptop of this caliber. With only 8GB, it is a bit of a hassle to upgrade. You get 2 slots with 2 RAMs, so, you’ll need to replace both the RAMs inside. Hence, it is better to just get one with 16 GB RAM.

The GPU is also updated, with this one incorporating the NVidia GTX 1050 Ti Max-Q with 4 GB VRAM. The GTX 1050 is the middle of the line graphics performer when it comes to gaming. Sure, the Ti is slightly better, but, this one is a Max-Q, which is built for more power efficiency. So, it doesn’t perform quite as well as the standard 1050 Ti. But even so, it works better than the 1050 found in the XPS 9560. And it can run most games pretty well.

Where the XPS series fails to perform is the thermals. Now, XPS laptops are very thin, which is why, they heat up a lot faster. Due to its thin form factor, ventilation is not really good. And so, the heat stays inside. And because of this, it faces considerable amount of thermal throttling. Which is why, gaming on this for long periods of time is not advised.

Also, since the heat stays inside, the thermal paste tends to dry up pretty quickly. It is a good practice to replace your thermal paste some every 3-6 months if you want a good gaming performance. Even with my unit, which I’ve had for 6 months, I’ve already used thermal paste in it once.

We did test some games on it as well. Witcher 3 performs just okay with it spitting out about 40 frames per second on Medium settings, and only 20 on Ultra Settings. As for FIFA 19, the game spit out over 110 frames per second at Ultra Settings. That is not agraphic intensive game, but, the XPS 9570 is not something that can handleanything intensive.

This laptop is not meant to be a gaming machine. It has the capacity to be one, but it has limitations. It is meant to be a work-horse that can withstand considerable amount of loads – mostly used for heavy applications like video editing and such. And such applications run without any kind of throttling, even though the temperature levels can be high.

Our unit had an IPS LCD Full HD matte panel, but there is a 4K option available too. The XPS series have some of the best displays. It has ample brightness at 390 nits, and with its matte finishing, it is quite visible at all lights. As aforementioned, the bezels are pretty thin. The color accuracy is there, with 100% standard RGB, 94% NTSC Color Gamut Coverage and 98% Adobe RGB. Due to this very reason, many believe this to be an ideal machine for editing stuff.

Our unit came with a 256 GB PCIe NVMe SSD drive and that is quite fast. On our tests, it gaveus up to 2728 MBPS of read speeds and a slow 339 MBPS of write speeds.

But it might not turn out to be the same for all. The SSD speeds are quite inconsistent even in the same models. The speed of SSDs depend on the manufacturers as well. Our laptop has a Toshiba XG5 SSD, and so, this is the speed with which it performed.

As for the storage, a 256 GB SSD is not quite enough. You can also add a 2.5” Hard disk drive, but, then,you’ll have to opt for a smaller battery in there. This is one of thedraw-backs of having an ever-so-slim chassis.

This unit has a good 97 Watt-hour battery, which is pretty ample. It gives over 10 hours of battery backup on regular usage, and about 7 hours while grinding it to heavy tasks. And we have a large battery because our unit only has an SSD. As I already said, if you opt to have a HDD, you’ll have to make do with a 56 Watt-hour unit.

The keyboard and trackpad on this thing are great, and haven’t changed much from the previous generations. The keyboard gives a firm feedback while typing and general typing is comfortable too. The soft white backlighting is also easy on the eyes.

The trackpad is nice and large. The glass surface gives a nice feel while tracking and Microsoft Precision drivers give accurate gestures. It’s precise, accurate and smooth. Nothing to complain about.

On the port side, you get all the necessary ports. There are two USB A’s, a full-size HDMI, an SD card slot, a 3.5mm headphone jack, and a USB-C with Thunderbolt 3 support. And one notable difference on the 9570 is that it’s USB-C finally has 4 lanes of PCIe, which means your external GPU performance can get a boost.

To sum things up,the XPS 15 9570 is still one of the best laptops out there. Performance wise, there are large gaming rigs that are better. But no other laptop can give you such a perfect combination of performance, style and build…except, maybe the MacBook Pro. But, that is very expensive. This is much more affordable.

For around $1600 or Rs.200000 here in Nepal, this is one of the best combos of hardware, build and performance. But you’ll also need an external storage option if you opt for the bigger battery. There are alternatives in the same price range like the Razer Blade 15 and the Alienware M15. You also get the Gigabyte Aero 15W which actually packs better specs. But there’s something compelling about the Dell XPS 9570 that cannot quite be defined.

However, the major issue with this laptop is that it suffers from thermal throttling. Yes, it’s not built for gaming, but this issue’s been here since all previous generations. It is present in the 9550, in the 9560 and in the 9570 as well. By now, Dell should have figured out a solution in the design for this, but they haven’t. And so, it’s getting a little old now. It’s high time that Dell refreshes the XPS series.