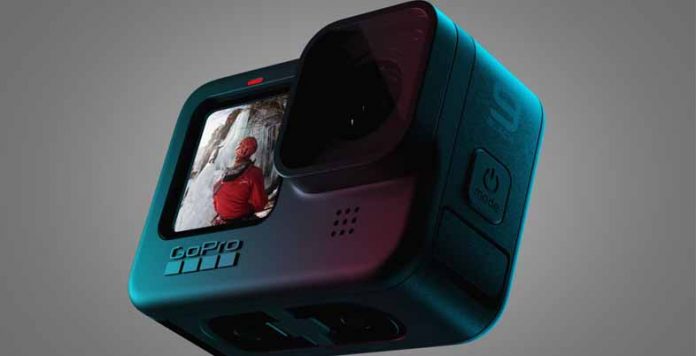 Weighing at around 158g, the Hero 9 Black is heavier than its predecessor, the Hero 8. As a matter of fact, it even outweighs the heavier GoPro Max. However, the weight and the size is totally justified as the device is equipped with a front-facing display and a bigger battery.

The addition of the front screen is one of the things that GoPro users had been longing for. Competing devices such as the Osmo Action and Brave 7 LE have a front display. Thus, it makes sense that GoPro has decided to include this in the new setup.

It is a 1.4-inch display that will help users to properly align what’s behind them and obviously take better shots. The new display isn’t touch-enabled though. However, you do get the option to choose what to display. The options include; center close up, Actual Screen, Status only, and off.

Moving on, the size of the rear screen has changed too. It now measures 2.27-inches. The increase in size means that you now get bigger on-screen buttons and better in-camera viewing experience.

Another major update includes a bigger 1720mAh battery. It is a significant upgrade from the 1220mAh battery that Hero 8 offered. The company claims that this unit will offer 30% more usage than the previous iteration. Furthermore, the battery is also optimized for cooler conditions.

Most of us thought that this new device will probably just improve the frame rates for 4K videos. However, GoPro has proven us wrong and incorporated a new 23.6MP sensor that can shoot 5K videos at 30 or 24 fps. Furthermore, you’ll also be able to capture stills at 20MP. However, 4K videos still max out at 60fps, 2.4K at 120fps and 1080p at 240fps. Similar to Hero 8, there are plenty of mods for the Hero 9 Black. Media mod, display mod, and light mod are all compatible with this new device. However, one significant upgrade is that the Hero 9 Black has a removable lens cover. That means you can add other lenses on top of Hero 9.

For instance, the Max Mod will help Hero 9 to reproduce the capabilities of the GoPro Max’s lens. By using this mod, you’ll be able to get better HyperSmooth, wider FOV, and 360-degree horizon lock.

The new features include HyperSmooth 3.0 and TimeWarp 3.0. The HyperSmooth brings in an improved in-camera stabilization and with the TimeWarp 3.0, you now get a half-speed option. Both of them are compatible with the in-camera horizon leveling. However, it is only available in Linear mode for videos.

Similarly, the new power tools include; Scheduled Capture, Duration, and HindSight. You can schedule the date and time for a recording to start with the help of Scheduled Capture. Similarly, Duration Capture allows you to specify when to switch off the recording. And finally, with HindSight, you’ll be able to catch something that happened just before you started recording. It is basically a combination of the loop recording option and LiveBurst.

The GoPro Hero 9 Black is now available in Nepal with a price tag of Rs.65,500. You can buy it from Oliz Store.