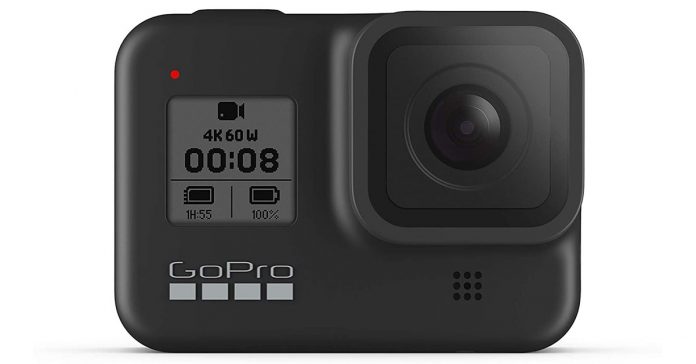 Packing tons of improvements and loads of cool new features over last year’s HERO7, GoPro unveiled the HERO8 Black in the international back in October. And now, Icefall Technologies, the official distributor of GoPro products in Nepal has finally brought the HERO8 Black to the Nepalese market. Enough small talk, let’s know more about the Go Pro Hero 8 along with its official price.

While last year’s HERO7 came in three different variants, the HERO8 only comes in one (as of now). As its an action camera, let’s start by talking about its videography prowess.

GoPro HERO8 Black features the all-new “HyperSmooth 2.0“. Though last year’s HyperSmooth was received great regards, it didn’t work in all resolution of videos. But the new HyperSmooth 2.0 works in all resolution and all frame rates, including the 8x Slo-Mo. You can select from 3 options of stabilization – On, High, and Boost, with the latter giving you the most stabilized video. It should be noted that your videos will be treated with mild cropping when stabilized.

Also making its entry is a feature called “Horizontal Levelling“. What is does is level your videos in the horizontal axis, resulting in a smooth cinematic video with up & down movements still visible. The 12MP camera also features 4 digital lenses that let you take a wide range of photos and videos. They are – Narrow, distortion-free Linear, Wide, and SuperView. Apart from the resolution and aspect ratio, the HERO8 Black’s video frame rate also depends on the type of lens used. Additionally, you can choose from 3 built-in presets (Cinematic, Activity, Slo-Mo) for video recording depending upon your use-case so that you don’t need to meddle through the settings all that much.

The HERO8 Black also sees an improvement in GoPro’s TimeWarp effect department. Now equipped with TimeWarp 2.0, this camera can now adapt to your speed and you can also tap to slow down or speed up the video. So cool! GoPro also promises better audio capture though it features the same 3mic setup to the predecessor. For you streamers out there, the HERO8 Black can now push up to Full-HD (1080p) live-streaming through the app, which was limited to 720p in earlier models.

Now, let’s move on to photography. Unlike videography, there isn’t much to talk about here. GoPro’s SuperPhoto (aka HDR) has gotten slightly better with an improved HDR algorithm.

Here, GoPro is debuting the “LiveBurst” feature. This lets you capture 1.5 seconds of footage (only from Wide lens) before and after hitting the shutter button. So, you have the option to pick the best still image from 90 of them or share a 3-second 4K video as is. For finetuning your capture’s settings, the HERO8 Black comes with GoPro’s signature “Protune” functionality. There are also “Burst” & “Night” photography features. Unfortunately, you can’t take photos from the camera’s “SuperView” lens.

For the first time, GoPro is introducing “Extension Mods” for the HERO8 Black. You can attach 3 mods that extend the functionality of your camera. As always, the GoPro HERO8 Black features a waterproof build. The limit here is up to 33ft (10m). Apart from having a rugged build quality, the company says that the HERO8 has a 2x stronger lens than the predecessor so this should be much durable in tough and taxing scenarios.

It features the same GP1 SoC and the 1220 mAh battery. Though the battery capacity of the HERO8 is the same as that of the HERO7 with the exact shape, it is through this new battery that the HERO8 is capable of HyperSmooth 2.0.

Using the companion app, you can view, edit, customize, and share your photos and videos which comes in very handy as well. The only compromise on the newer model is that you must buy the Media mod if you want HDMI output.

The official price of GoPro Hero 8 Black in Nepal is Rs. 51,500. You can purchase it from the likes of Icefall Technologies and Oliz Store.