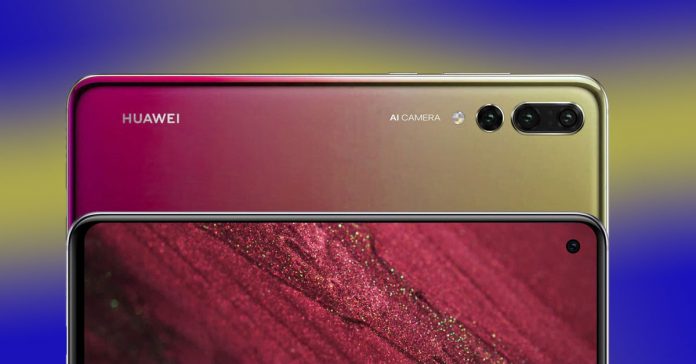 The Huawei Nova 4 was just but a rumor a few days ago. Now, we’re seeing some pictures and have an idea about some specs that it is going to pack. The Nova 3 got a great response, and we can expect similar from the Nova 4. But…the Nova 4 is shaping up to be all too familiar.

What I mean, is based on some leaked specs and photographs, we have a better idea of what the Nova 4 is going to look like. And surprise surprise…it looks like a twin to the Huawei P20 Pro, at least from the back. The dual gradient colors with the triple camera setup, the rear-mounted fingerprint sensor and everything. At the front, however, the screen has a hole on the top left corner for the selfie camera as promised.

The screen is a large 6.41″, but no confirmation on whether it will be an LCD panel or AMOLED. But for a phone such as this, it will most likely have an LCD panel. There are three cameras at the back, arranged just like the P20 Pro. And among them, the primary sensor is a whopping 48 MP camera!

Yes, higher mega-pixel count generally doesn’t mean it’s all that good, but, Huawei’s AI camera have never disappointed. And needless to say, these cameras will have better AI integration as well. The phone also packs a good sized 3900 mAh battery.

Further specs are yet to be revealed, but the phone should pack the latest Kirin 980. Since it has a 48 MP sensor at the back, it will need serious power, especially for image processing, and AI capabilities. And looking at Nova 3, a Kirin 980 is the most likely choice.

We’ll keep you updated with every bits we receive, so, stay tuned. Are you excited about the Nova 4, or will you let it pass?