After impressing the PC industry with the 12th Gen desktop chips, Intel has just announced the mobile lineup of the Raptor Lake processors. The company has kickstarted CES 2023 with the announcement of the latest U-series, P-series, H-series, and HX-series of laptop processors— each series catering to a specific group. In this article, we will discuss the latest 13th Gen Raptor Lake Intel mobile processors in more detail.

Like their desktop counterparts, the new Raptor Lake mobile processors are based on Intel’s latest hybrid architecture. Based on the now-matured Intel 7 process, they bring a combination of high-performing Performance cores (P-cores) and efficiency-first Efficient (E-cores). They work in tandem thanks to the Intel Thread Director, which works alongside the operating system (OS) to deploy the most appropriate core depending on the task at hand.

At the top of the new Raptor Lake mobile hierarchy is the HX series. These are “desktop-level” processors for extreme-performance laptops. Out of the nine chips announced, the Core i9-13980HX stole the show. It is a 24-core chip, divided into 8 P-cores and 16 E-cores with the former supporting Intel Hyper-Threading. As a result, the total thread count is 32.

Intel has two more 24-core laptop processors: Core i9-12950HX and Core i9-13900Hx. They all share the same Core/Thread counts as well as the base frequencies of the Performance and Efficient clusters. However, the 12980HX edges past the other two with P-Core turbo and E-Core turbo at 5.6GHz and 4.0GHz, respectively. The i9-13950HX is a close second with the same E-Core Turbo but a lightly slower P-Core Turbo of 2.5GHz. Lastly, the Core i9-13900HX reaches Turbo frequencies of 3.9GHz and 5.4GHz for E-cores and P-cores, respectively.

Moreover, the HX series brings support for DDR5-5600 and DDR4-3200 RAM. You can pair with up to 128GB of RAM using the 4 DIMM slots in a 2DPC arrangement. The new HX series also supports XMP3.0 dynamic overclocking. Likewise, there is support for PCIe 5.0 x16, Intel Killer Wi-Fi, 6E, and Bluetooth LE Audio. There are no built-in Thunderbolt controllers, but OEMs can add up to 2 discrete controllers if they want to. That aside, the desktop-level Raptor Lake HX-series support up to 14 USB 2 and 10 USB 3 ports. 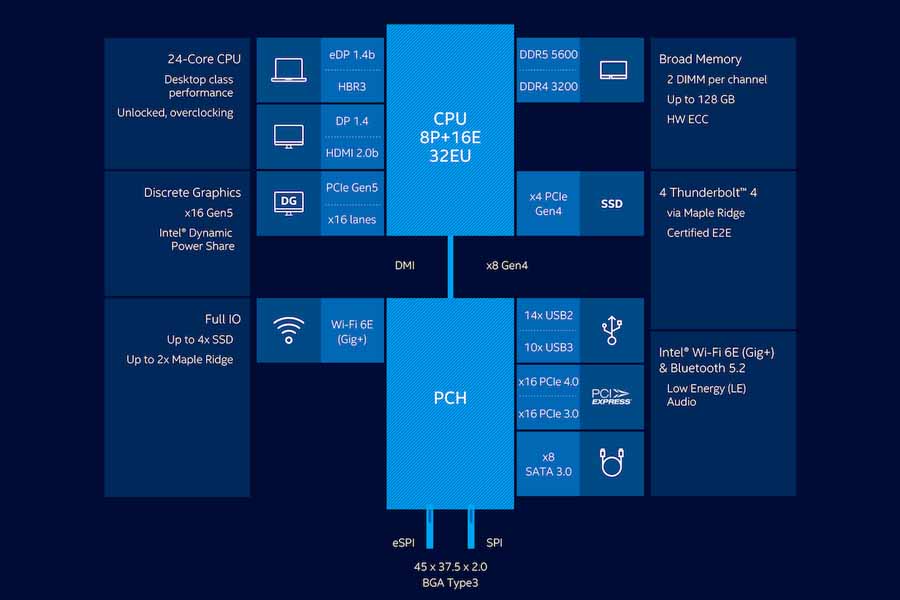 A step below the high-end HX series is the H series. These are not desktop-grade and are meant for more traditional performance-seeking laptop users. They max out 14 cores, with 6 intended for heavy workloads and the rest for background tasks. There are six processors with this Cores/Thread count, with the Intel Core i9-13900HK leading the line. It is the only 13th Gen H-series SKU with support for CPU overclocking and Intel vPro Essentials.

One of the key factors differentiating the H-series (and the P and U series) from the HX-series is the readily available Thunderbolt 4 controllers and support for LPDDR4x and LPDDR5x RAM on the former. In addition, it brings support for up to 4 USB 2, 10 USB 3, and 2 SATA 3.0 ports. The remaining Intel’s 12th Gen Raptor Lake mobile processors are meant to go into thin and light notebooks. Of the two, U-series prioritizes portable form factor, while the P-series is for those who want that extra bit of performance as well. Thus, P-series processors usually have a higher base and turbo TDPs than their U-series counterparts. They also offer better vPro compatibility for enterprise-level mobile solutions.

Intel has shut down the Pentium and Celeron lineup and will use N-series branding for entry-level processors moving forward. The new N-series processors are also based on the Intel 7 process but feature only Efficient cores. It is further categorized into Intel Processor and Intel Core i3 N-series processor. The former caps out at 4 cores, while the latter takes the count up to 8. They bring the new Intel UHD iGPU with 32 execution units, AV1 decoding, and HW acceleration