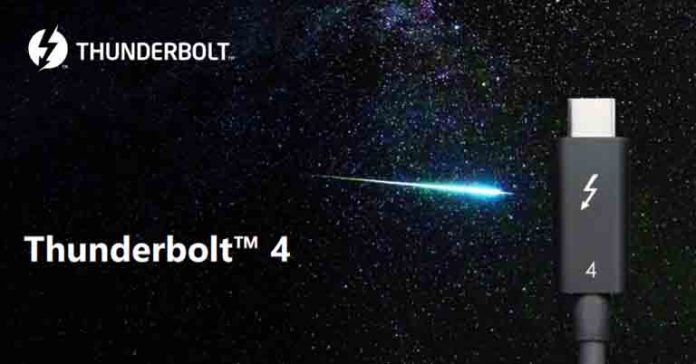 As stated earlier, Thunderbolt 4 isn’t faster than its predecessor. Like Thunderbolt 3, Thunderbolt 3 offers a maximum throughput of 40Gb/s. It is compatible with the previous Thunderbolt and USB products and in compliance with broader industry standards, that include DisplayPort, PCIe, and USB4. It now comes with increased minimum performance requirements, extended capabilities, and USB4 compliance.

Upcoming TB 4 certified device will support up to two 4K UHD displays, which is twice of what its predecessor supported. Alternatively, it can support a single 8K display. Similarly, at least one port should support PC charging (up to 100W). The external output remains unchanged at 15W. Also, Intel requires TB 4 certified computers and laptops to support wake from sleep when connected to TB 4 dock. Similarly, Intel has also made DMA protection via its Intel VT-d compulsory. It’s the first time Intel is offering dock with support for up to four TB 4 and universal cable up to 2 meters. Among the four docks, one will include an upstream port, while the rest will have downstream ports.

Intel will integrate TB 4 support into the upcoming Tiger Lake processor. What it means is that manufacturers that opt for these processors won’t need an extra device for TB4. For devices powered by different processors, Intel has announced two host controllers under the Thunderbolt controller 8000 series – JHL8540 and JHL8340. Similarly, accessory makers will have to use JHL8440 device controllers. Thunderbolt 4 will debut alongside the Tiger Lake processor later this year. We will see it first in the devices under the Intel’s Project Athena.