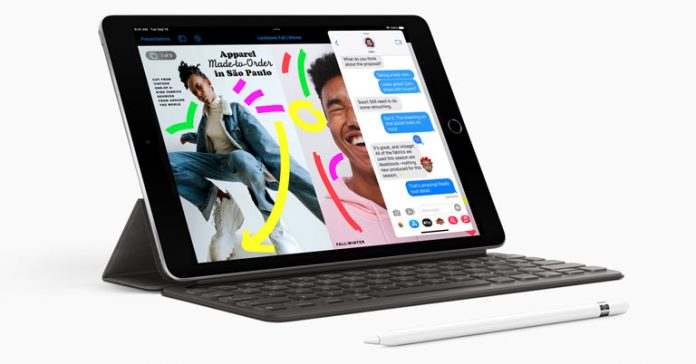 Apple recently refreshed its budget iPad lineup. The 9th generation of iPad brings decent improvement in performance, among other notable changes. And it’s now officially available in Nepal. Here, we will be looking at the specs, features, official price, and availability of iPad 10.2 (2021) in Nepal.

Like its predecessor, the new iPad comes with a 10.2-inch Retina display. But this time around, it is accompanied by a new light sensor. With this, it supports True Tone technology that tweaks the color of the panel based on the ambient light.

It even supports stylus input from Apple Pencil (1st gen). However, users will have to buy it separately. Anyway, Apple says the body of the new iPad has been made using 100% recycled aluminum. Under the hood, iPad 10.2 (9th Generation) packs the A13 Bionic chip that boasts a 20% performance boost over the previous generation (A12 Bionic). The chip features a Neural Engine that powers multiple machine learning-based features such as Live Text and Center Stage. Similarly, there is a 12MP ultra-wide camera at the front that is capable of recording 1080p videos at 60fps. It now supports the aforementioned Center Stage feature that adjusts the frame based on the subject’s movement in video calling apps like FaceTime and Zoom.

Fueling the new iPad is a 32.4 Watt-hour lithium-polymer battery. According to Apple, it can last up to 10 hours of video streaming on Wi-Fi. Touch ID is integrated into the home button that you can use to unlock the device and even make online payments.

As for connectivity, it has dual-band Wi-Fi and Bluetooth 4.2. There is also a cellular variant up for grabs.