Just like last year, manufacturers and distributors have been releasing new mid-range phones every week or so this year too. OnePlus Nepal released its older flagship the OnePlus 2, and now Lava has released a new mid-ranger, the Lava A3. The device packs some pretty decent specs and is priced at Rs. 25,000. It packs features like a 720p display, 3GB RAM, a fingerprint scanner, Android Marshmallow out of the box and a 3020mAh battery among others.

The Lava A3 comes in a full unibody metal design. It a has a 5.5-inch IPS display with the resolution of 1280 x 720 pixels (267 PPI). The display is covered by Gorilla Glass 3 and features a 2.5D arc. The 720p display is a disappointment since here are a lot of smartphones in this price range that have a 1080p display. Under the hood, the Lava A3 is powered by an Octa-core 64-bit MediaTek 6750 processor that is clocked at 1.5GHz. The processor is supported by 3GB of DDR3 RAM and Mali T860 GPU. Talking about its software, the A3 runs on Android 6.0 Marshmallow out of the box with Lava’s Star OS 3.3 on top. The company hasn’t clarified on whether the device will receive a Nougat update or not. Memory wise, it comes with 32GB of internal storage that can be expanded up to 64GB via a microSD card. 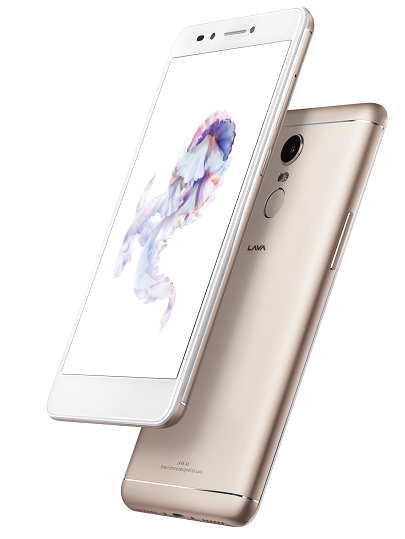 In the optics department, the device houses a 13-megapixel rear facing camera with f/2.0 aperture and 1.12-pixel size. It uses Sony IMX258 sensor and it accompanied by a single tone flash. The front facing camera which uses CMOS 4H8 sensor is of 8-megapixel. Like many smartphones these days, the front camera also features a LED flash to up your selfie game in a dark environment.

Connectivity wise, the Lava A3 features dual hybrid sim slot meaning you’ll have to choose between a nano sim and a microSD card. It supports 4G connectivity.

Like most smartphones of its price range, Lava A3 is also equipped with a fingerprint sensor. Lava has claimed that the fingerprint scanner can unlock the device in 0.16 seconds. A 3020mAh non-removable Li-Polymer battery backs the device. Since it features a 720p display, the battery will surely last you long.

Here’s everything you need to know about the Lava A3:

Check out the full review of Lava A3 smartphone here in this link.