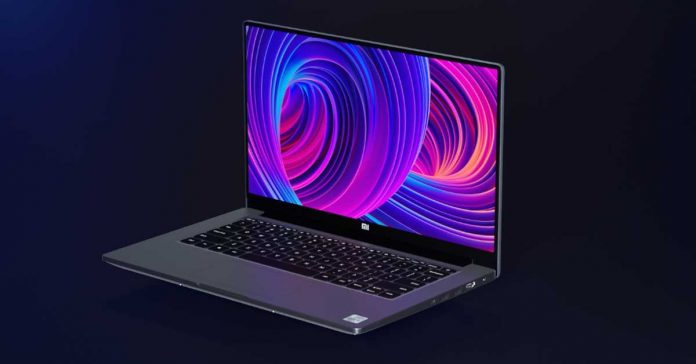 The Mi Notebook 14 Horizon Edition features an all-metal design. The body of the laptop is composed of an Aluminium-Magnesium alloy. It has an additional layer of sand-blasting on top to minimize the eventual wear and tear. This ultrabook’s width is the same as that of an A4 size paper, though it is a little longer. Xiaomi has fitted a 14-inch display inside a form factor of a 13-inch laptop.

How did they do that? The Horizon Edition comes with skinny bezels (3mm) on the three sides of the screen. With such thin bezels, there is no room to fit in a webcam. But Xioami will be providing Mi webcam HD bundled with the ultrabook. The bottom bezel is thicker than the rest and encloses the “Mi” branding. The device has a screen to body ratio of 91%. Talking about the display, there is a 14-inch FHD screen with an Anti-glare layer on top. Xiaomi is calling it the Horizon Display. The display has a resolution of 1920 x 1080 pixels and an aspect ratio of 16:9. The viewing angle on this one is 178-degree.

The Mi Notebook 14 Horizon Edition comes with a traditional chiclet keyboard. Because of the size constraints, it doesn’t have a dedicated numeric keypad. Xiaomi has used a scissor-switch keyboard, which is quite common on laptops. The keys have a key-travel of about 1.3mm, while the multi-touch trackpad is also spacious at 11cm (W) x 5.7cm (H). There are two variants of Mi Notebook 14 Horizon Edition. Both of them are powered by the Intel 10th Gen Comet Lake processors. However, it would have been great if they included the latest Icelack CPUs. While the base variant packs in Core i5 – 10210U processor, the top-end model has Core i7 – 10510U. Both processors have four cores and eight threads but the i7 model can reach higher clock speeds. Both the variants have an integrated NVIDIA GeForce MX350 GPU so that you can also do casual gaming with it.

The Horizon Edition comes with 8GB of DDR4 RAM and 512GB SSD storage. While the base variant uses a slower SATA III SSD, the top-end model features much faster PCIe Gen 3 NVMe SSD. Other than that, there is no difference between the two options.

It comes with a 46 Watt-hr battery that Xiaomi claims can provide 10 hours of battery backup. It comes with a 65W charger that can fill the device from 0 to 50% in 35 minutes. The device features two USB 3.1 Type-A ports, a USB 2.0 Type-A port, and a USB Type C port. You also get an HDMI port and a 3.5mm headphone jack that doubles as a mic in as well. Other than that, the laptop comes with Mi Smart Share that lets users transfer files and folders between different Mi devices. It also has Mi Blaze Unlock pre-installed, using which you can unlock the device in 1.2 seconds using your Mi Band.

The Vanilla Mi Notebook 14 is a lot like its high-end, but Xiaomi has cut some corners on this one to keep the price down.

First of all, it comes in a slightly more significant form factor. The dimension on this one is 323 x 228 x 17.95-mm. The reason for this is that the bezels around the screen are thicker at 5.75mm. As a result, it has a screen to body ratio of 81%. Other than that, it features the same 14-inch Anti-glare FHD display with a 178-degree viewing angle. It features the same metallic body as the Horizon Edition too. The chassis is made up of Aluminium-Magnesium Alloy with anodized sandblasted coating on the top. But it is on the heavier side, weighing around 1.5kg.

The vanilla Mi Notebook 14 is only available with 10 Gen Intel Core i5-10210U. This comet lake processor has four cores and eight threads. It can reach the clock speed of up to 4.2 GHz. It is paired with Intel UHD Graphics 620. But there is also a variant of the Mi Notebook 14 with NVIDIA GeForce MX250.

Mi Notebook comes with 8GB of DDR4 RAM. Based on the variant you choose to buy, you might end up with either 256GB or 512GB of SSD. However, this storage won’t be as fast as on the Horizon Edition as they are SATA Drive.

The rest of the specs looks similar. You get the same keyboard. In terms of ports, you will miss out on a USB Type-C port. It features the same 46WHr battery and boasts 10 hours of battery backup. Check out our unboxing and initial impression of Redmi Note 9 Pro!