Home Microsoft Microsoft Surface Book 3 launched: the revamp that we’ve been waiting for! 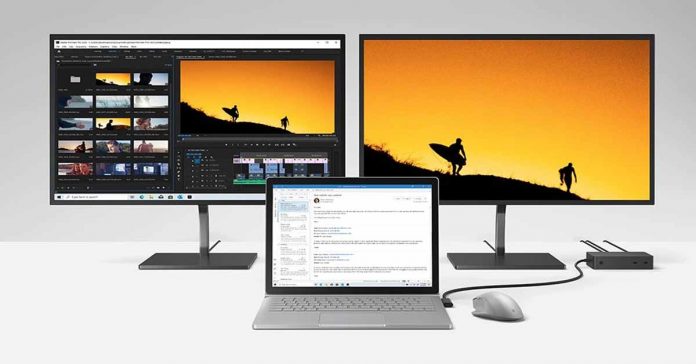 The Surface laptops are targeted specifically for creators and designers. And the current setup is no different. One can configure their surface book with the Nvidia Quadro RTX 300 for extra GPU power. For professionals working with 3D objects and CAD designs, this setup helps to significantly reduces the render time. Let’s dive further in what the Microsoft Surface Book 3 is all about.

As mentioned above, design-wise nothing much has changed from the previous iteration of the Surface Books. The current laptop retains the silver color scheme and the fulcrum hinge. This hinge has been a distinctive feature of the Surface Books and it helps in safely connecting the tablet and the keyboard. However, this also prevents the laptop from closing flat. Sticking to the touch screen feature, the current Surface Book supports 10-point touch tracking. That means, its screen supports touch from all the fingers of your hand. Moreover, it also supports Surface Pen and Surface Dial. However, they need to be bought separately.

Under the hood is where the magic happens in the Surface Book 3. The laptop is configure with the 10th Gen Intel Ice Lake processor. For the 13.5-inch model, you can choose between a Core i5 (base) model or Core i7 (higher-end) model. However, with the 15-inch model, you have a single option with Core i7. Claim is that the 10 Gen improves the power of the laptop by 50%.

You can configure the laptop with up to 32GB of RAM. In terms of the storage, the 13.5-inch model come with 256GB, but it can be upgraded to 1TB. Similarly, for the 15-inch model, the storage starts with 256GB and goes up to 2TB. Microsoft says that it is the fastest SSD that they have ever shipped.

The Nvidia graphics improves the gaming as well as the multimedia capabilities of the device. Moreover, on the 15-inch model, users can play top Xbox Game Pass for PC titles at FHD. That too at 60 fps.

These graphics cards are housed in the detachable keyboard. So, once you detach the tablet remains slim but you won’t be able to take benefits of the higher graphics in tablet mode. Oh, and before I forget, there’s an Nvidia Quadro RTX 3000 configuration available for the 15-inch model too. It is specifically designed for higher education and will be the most expensive model in the lineup.

Both tablet and the keyboard have their separate battery. The laptop mode will offer the biggest battery life as both the batteries will be in use. Estimation is that the 13.5-inch model boasts 15.5 hours of battery and the 15-inch one boasts 17.5 hours of battery (with keyboards attached). Microsoft has not yet specified the details of the battery life in the tablet mode. As for the connectivity, the Microsoft Surface Book 3 ships with Wi-Fi 6 with an 802.11ax compatible wireless card and supports Bluetooth 5.0. One additional feature exclusive to the 15-inch Surface Book 3 is that you’ll be able to use a wireless Xbox controller on it without a USB adapter.