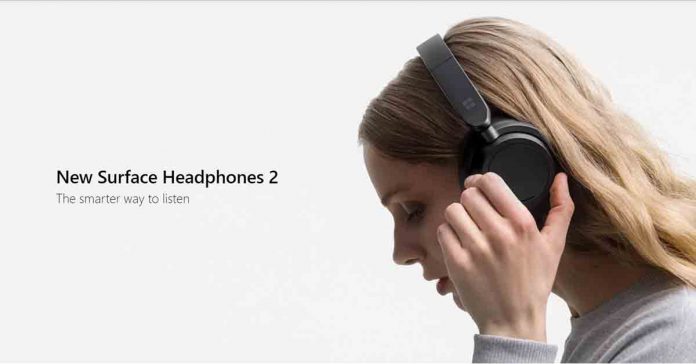 If we neglect the colors for a moment, the Surface Headphones and Surface Headphones look the same. Microsoft’s latest over-the-ear headphone comes with a new color option – Matte Black but that about it. Surface Headphones 2’s earcups are made up of memory foam and a sturdy arc holding everything in place. The cups are now cable of 180-degree rotations. Microsoft has included dials on both the right and left side that users can use to control volume and noise cancellation, respectively. Surface Headphones 2 features the 40mm Free Edge sound driver. Though the sound driver is the same as in its predecessor, Microsoft claims Surface Headphones 2 possesses better sound quality. It comes with 13 levels of Active Noise Cancellation that you can adjust using the dial on the left ear. The company claims that the ANC has been specifically optimized for the human voice and that it can “drown out your family while working from home“.

Surface Headphones 2 does come with a 3.5mm headphone jack as well, but it also comes with Bluetooth support in case you want to go wireless. The Bluetooth technology has been upgraded to version 5.0. Microsoft has turned to Qualcomm’s aptX codec, which is much more effective at reducing latency than the standard SBC codec in the Surface Headphones.

With the Surface Headphones 2, you won’t be short of control options. The power and the mute button are situated on the right side alongside the volume dial. The left side is reserved for the ANC dial. There are touch interfaces on both sides. Audio on the headphone also pauses when taken off and resumes when putting it back on. You can use the dual mic set up for voice control, which is more useful while working with Microsoft 365. Users will be able to use voice dictation in Word and even control the slides in Powerpoint with Surface Headphones 2.

Microsoft Surface Headphones 2 comes with an upgraded battery life of about 20 hours compared to 15 hours in its predecessor. Microsoft says that the headphones can achieve the number over Bluetooth transmission and with ANC turned on. So theoretically, we can expect to squeeze out a few extra hours with ANC turned off. A USB cable is included in the box, that can charge the headphones entirely in 2 hours. If you are in a hurry and don’t want to wait, a 5-min charge can add about an hour of playback time.

Surface Headphones 2 may not be capable of dethroning Sony’s WH-1000XM3 as the best noise-canceling headphones but is still a solid headphone at its price range. The fact that it is priced cheaper than its predecessor makes it even more appealing.