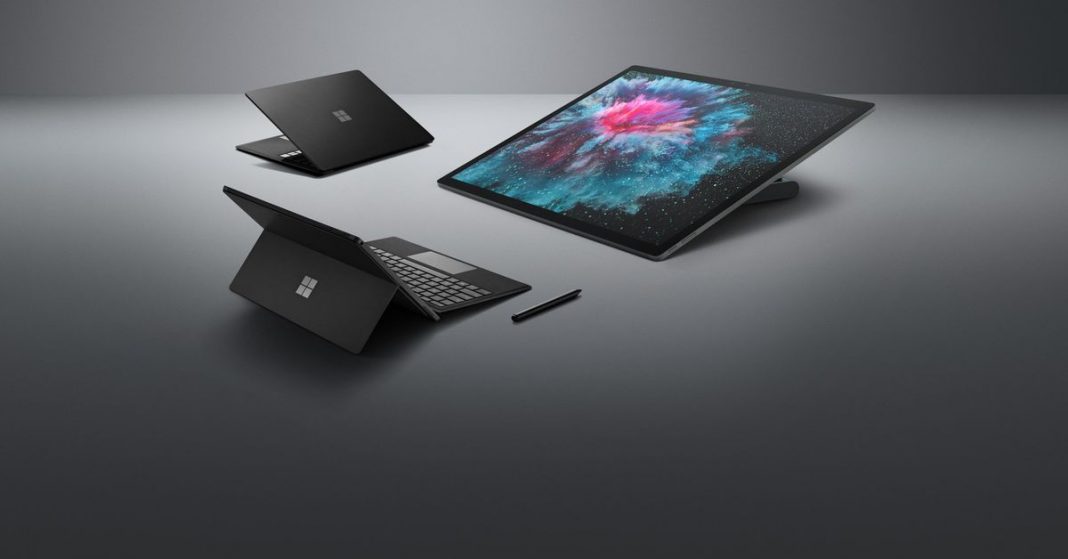 At a recent event in New York, Microsoft unveiled its new and refreshed lineup of Surface devices. In the event, the tech giant not only showed off its upgraded laptop lineup but also announced a new product. The new product to be launched in the event was the headphones, which is dubbed as the Surface headphones. The new announcement of such wide varieties of products is really commendable. But are these devices really interesting in terms of features? Let find out.

Wrapped in Black, Blue, Red and Platinum Grey colors, the aesthetics of the Surface Pro 6 is really appealing. But despite the refreshment in the internals, the design of the device hasn’t changed much. It comes with the same ubiquitous hinge, keeping the Surface Pen close by and incorporating the same aspect ratio of 3:2. In its 12.3-inch display size, the 2-in-1 convertible features 2736 x 1824 pixels resolution contributing to a pixel density of 267PPI. The display on this new device will also have a higher contrast ratio than its predecessor. So, the content on this newbie will possess deeper blacks and brighter whites.

On the camera front, the Microsoft Surface Pro 6 comes with an 8MP rear camera and a 5MP front facing camera, which can be used for Windows Hello and video calls. On the performance side of things, this new device comes with the updated 8th generation Intel core CPUs and with 16GB of RAM and up to 1TB SSD alongside. With this configuration, Microsoft boasted a 67% boost in performance on this newbie when compared side by side with its predecessor.

In terms of ports, the device has accommodated one USB port, a micro SD card slot, a headphone jack, and a port for Microsoft’s proprietary surface connect charging cables. But there is no USB Type-C port.

The best thing of the Microsoft Surface pro convertible is its portability and the ease in getting the work done anywhere. And this portability has remain intact in this new device as well. The device is really light in terms of weight weighing just 1.7 pounds. Despite is miniature stature and light weight, it is capable of providing 13.5 hours of backup.

In terms of RAM, ROM, and processor configuration, the device comes in three variants. The base variant comes with a core i5 processor, 128GB SSD, and 8GB RAM, which is tagged with the price of $899. Similarly, the higher variant (i7/16GB/512GB) has a price tag of $1899 and the highest end variant (i7/16GB/1TB) will cost $2299 on the purchase. The pre-orders for the devices have already started in various countries. These devices will go on sale from 16th of October.

Alike the Surface Pro 6 convertible, the Surface laptop 2 comes with the new Matte color variant, Whiskey Lake processor and an improved performance over its predecessor.

Microsoft Surface Laptop 2 has a slightly bigger display than the Surface Pro 6. The device features 13.5-inch PixelSense display and comes with a resolution of 2,256 x 1,504 pixels. The device covers 100% of the sRGB color spectrum in terms of color accuracy. The surface laptop 2 rocks with 1500:1 in terms of contrast ratio, which is really appreciable. Microsoft Surface Laptop 2 is also the first laptop to feature the thinnest LCD panels in any laptop.

On the performance front, the Surface Laptop 2 comes with the 8th generation Intel Core CPU with which the company claims a performance enhancement of 85% over its predecessor. That’s not all, this device also excels at reducing the noises from the fans and keyboard. For the input-output interface, ports on the device are still limited to a single USB 3.0 and Mini DisplayPort. It means the users have to live without the USB-C.

The new Surface Studio 2 is the fastest Surface Studio Microsoft has ever made. However, the overall aesthetics and the design language has barely changed when compared to its predecessor.

The Surface Studio 2 comes with the 28-inch display with a resolution of 4500 x 3000 pixels. The size and resolution are same as its predecessor. However, Microsoft did an extra job to make the display on this newbie better than the processor. The brightness on its display has been increased by 38% and contrast ratio has been enhanced by 22%. This has been possible because of the improvements in the transistor technology which lies behind the display.

The original or the previous generation of the Surface Studio had a 6th-gen Intel core processor with 32GB RAM, 2TB HDD, and 128GB of SSD. And this time, there are more modern and improved components on this new device. Although the 8th-generation CPU, which most of us like to hear is basically absent, the device has incorporated 7th-gen Intel HQ-series CPU. This is surely disappointing but still, it offers a decent performance boost over its predecessor.

Even on the graphics side, RTX card is absent here. The company opted for Nvidia Pascal GTX 1060 or GTX 1070 graphics. Despite another disappointment here, the bump in graphics performance over its predecessor might console the users a little bit. In terms of storage, Microsoft cut down the HDD completely and provided up to whopping 2TB of SSD onboard. This could be a great advantage for the users as the read/write speed of the SSD happens to be way higher than the mechanical hard drives.

In the event, Microsoft not just launched the computing devices but also brought the noise canceling headphones, which goes by name Microsoft Surface headphones.

The headphone also supports “Hey Cortana” command, which with the headphone pauses the music when removed from the ears. The headphone charges via USB Type-C port. There is also a 3.5mm headphone jack port, which can be used for wired audio output. By the way, the 3.5mm cable is detachable, so users don’t have to cling with it while listening to music through the wireless means.

“They slip comfortably over your ears to surround you with spectacular sound quality and 13 levels of ambient noise control,” Microsoft’s press release says. “Designed with collaboration in mind, there are 2 beam-forming microphones on each ear cup, 8 microphones in total, all helping you focus on the sounds you want to capture allowing for excellent call experiences.”

For the controls, Microsoft has also included touch buttons on the ear cups to play/pause the audio or skipping tracks. Battery life is rated at 15 hours over Bluetooth or 50 hours when plugged in via headphone jack, and the sound can be customized via an app that Microsoft will release alongside the Surface Headphones.

Talking about the price, the Microsoft surface headphones will cost you $349 on the purchase.