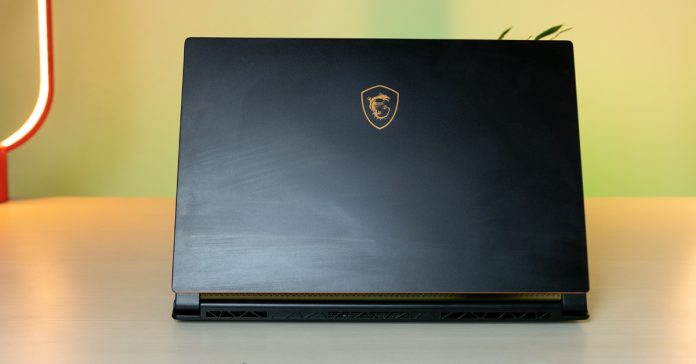 As far as gaming laptops go, generally, the more powerful they are, the bulkier they are. But if we try to squeeze that power into a less bulky chassis, what does it cost? Probably, more money. Why? Well, if you look at the MSI GS65 Stealth 2018, you’ll know. It has the same specs like the lesser costing MSI GE63 Raider RGB, but, in a much slimmer and sleeker body, with an added 144 Hz screen. So, it the same power in a slimmer body worth the extra cash?

The MSI GS65 Stealth Thin is just like the name goes. It is thin…actually pretty thin for a gaming laptop at 24 mm. It is also pretty lightweight, weighing only 1.85 kilograms. This 15” laptop in a 14-inch body is pretty compact, and you’ll love its portability. It fits easily in most backpacks and is quite comfortable to carry around. This laptop is also easy enough to open with one hand, and it can also open it up to a straight 180-degree angle. And while you might think it’s not very useful, it is actually handy sometimes. The build is fully aluminum, but even for that, it does not feel as sturdy. But it might have been done to keep the laptop lightweight. There is a bit of flex all over the chassis and on the lid as well. It does worry me a bit, but not a real deal breaker. The soft rounded edges make for a very sleek looking device overall. I feel like the design is worth looking at. Subtle gold accents on a full matte black sandblasted texture look very new and appealing. This is something very different from MSI’s usual bold red coloring. Even MSI’s signature Dragon Sigil gets a golden touch. There is a golden strip running around the edges of the lid, and that gives it sort of a classy look. The design is a matter of preference, though. And if you’re a fan of MSI bold colors, then, you might not like it all that well. But I, for one, like it quite a lot. With the color choice, it does not scream “gaming”, but also doubles as a work laptop that you can pull out in a coffee shop to work with.

But of course, this accent might not have worked very well on bigger gaming rigs. But on this particular machine, it is gold! (pun intended)

When the size of the laptops gets smaller, they tend to compromise on the ports. And this laptop does it too. It sacrifices the SDcard slot, which seems like an unnecessary decision. The device with its specs would work pretty well for editing, but not having an SD card slot, is a minor inconvenience. 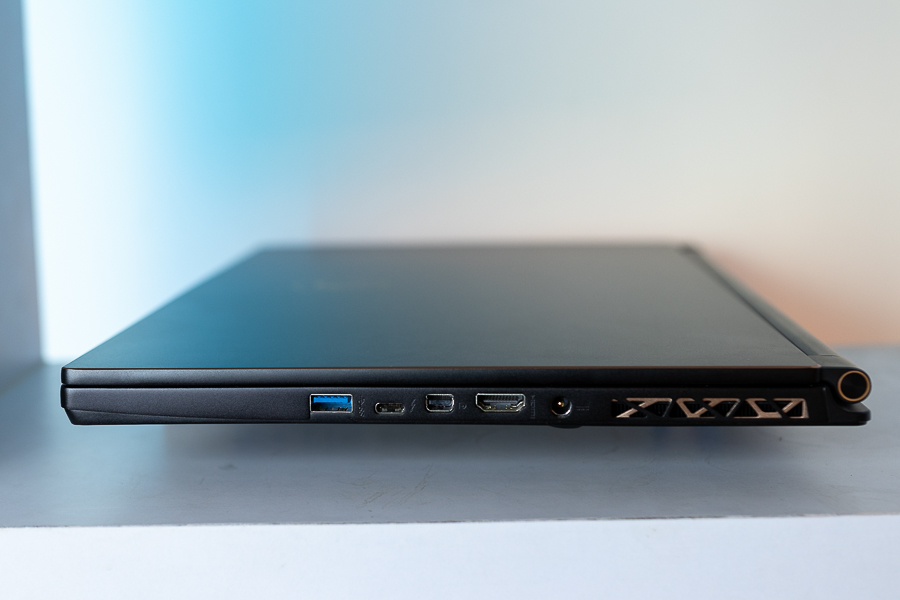 Other than that, you get all your necessary ports. There are 3 USB As, a headphone jack and audio input, an HDMI, a DisplayPort, a USB-C with Thunderbolt 3 support with 4 lanes of PCIe. This means you can use up to three external monitors at once if you fancy. The Trackpad here is nothing special. It uses Windows Precision Drivers. The gestures are on point, but the tracking is not always smooth and accurate. Other than that, there are no problems. 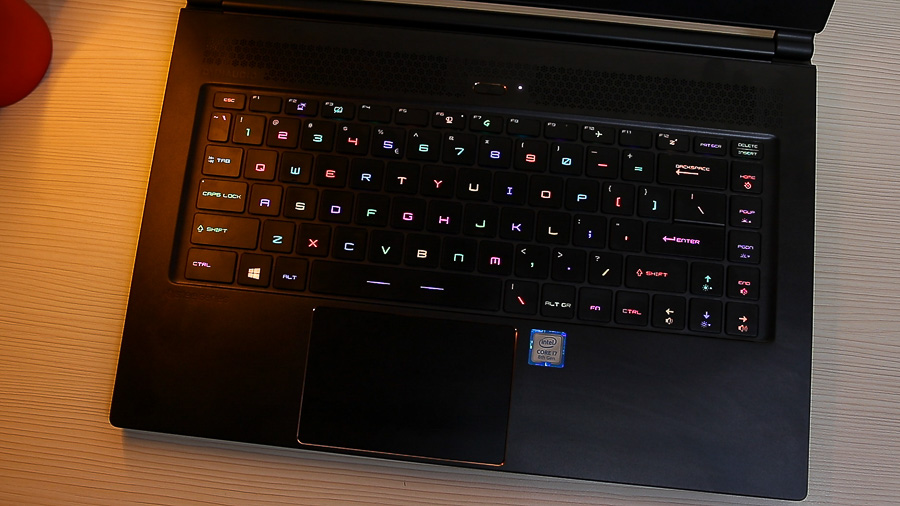 The keyboard is MSI’s standard SteelSeries Engine 3 keyboard with that individual key RGB backlighting. Being a 15″ laptop, it is not your regular full-sized keyboard, though. Typing on the keyboard is great, the keys give tactile feedback, but is not that noisy. With about 1.4 mm key travel, it is pretty comfortable as well. 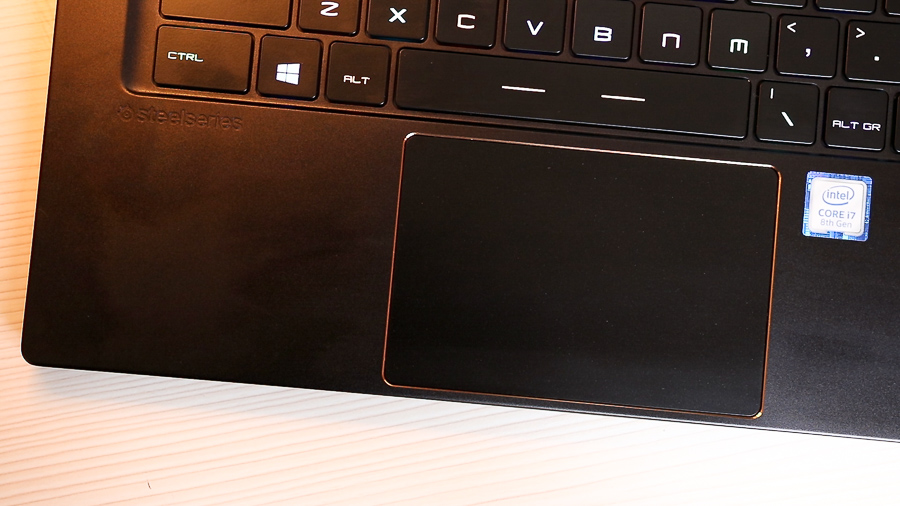 There are 16.7 million colors in the backlighting, which, even though, we don’t know what to do with, is there. The Steel Series 3 software lets you modify the backlighting patterns, which is pretty comprehensive. Being SteelSeries, it features in-game backlighting, meaning, the keyboard changes light patterns according to the games you’re playing. Another good feature is when you press the Function Key, it highlights the respective keys as well. There’s a lot going on with the keyboard, but overall, it is a great keyboard.

The display is simply a treat. It has a standard 15.6” Full HD IPS display but the very thin bezels make it much better. Plus, the 144 Hz refresh rate makes games very fluid. But you’ll also notice the smoothness during regular usage. The screen has a 7 ms of response time, which is a bit slower than the 3 ms on the MSI GE63 Raider, but that amount of difference is barely noticeable. The display quality is also pretty good. Viewing angles are okay with very slight color shifts at sharp angles. Brightness peaks out at about 290 nits, which is a bit low for liking, but its a gaming laptop. The color accuracy is also definitely there, with 100% sRGB color and a very close Adobe RGB. Again, you get the MSI’s true display which lets you switch color modes depending on what you’re doing, There’s this designer mode claiming 100% Adobe RGB, but again, that is not possible on a 1080 panel. In short, there is nothing to complain about.

This laptop packs almost the same specs of the GE63 Raider. It has the Hexa-core 8th gen Intel i7-8750H processor, which, no doubt about it is a great processor. Combined with 16 GB RAM, it can handle almost anything. Multi-tasking is a breeze. And since this is a processor we find on most high-end laptops, so there’s no need to go on about it.

The graphics at play is the Nvidia GTX 1070 Max-Q with 8 GB video memory. This is slightly less powerful than your regular GTX 1070, but it can handle almost any games you throw at it. I played a lot of games on it, and it kills! The fast screen on top of it makes it all the better. All the games were on ultra settings, and it did not disappoint with the frame rates for any. Even very high graphics intensive games like PUBG and Witcher 3 ran pretty smooth. The Thermals are also super cool, not literally, though. Because the laptop can get quite hot. While the temperature remains okay on the surface, the bottom panel gets very hot. This means gaming on your lap is not advised. But there is no thermal throttling, even after long hours of gaming. Playing GTA V for hours and hours, on Ultra settings, resulted in no lags or stutters of any kind, so, it’s safe to say there’s no throttling.

There is MSI’s Dragon Center that lets you monitor and control your system. It lets you monitor your CPU and GPU performance to adjusting fan speeds and other settings for optimum performance. The only complaint is that while the laptop is named Stealth, it is not very “stealthy”. Meaning, the fans can get quite noisy, and of course, there’s the Cooler Boost option, which can sound pretty annoying but will let you game to the max potential.

As for the storage, there’s only 512 GB NVMe M.2 SSD, which can prove inadequate. The speeds of the SSD, though is not very good. The read speeds averages at about 550 MBPS while the write speeds at 360 MBPS.

Battery life on gaming laptops has never been their strong suit, and this one is no exception. But this laptop has a good 80 Watt-hour battery but for that, sacrifices have been made. For instance, there is no HDD slot in it. So, if you want to expand the storage, there’s no other way than to replace the SSD with a larger one.

Also, the battery life was not as good as claimed. While the claims are in the 7-hour range, it provided us actually half of that figure. It will give you about 3.5 hours on regular usage. On power saver, it can go a bit longer, but nowhere close to 7 hours, though.

The MSI GS65 Stealth 2018 looks like a pretty solid gaming notebook. There are a lot of pros outweighing the cons. Actually, finding the negative aspects of this laptop means nitpicking on the small things. The build quality is a bit flimsy, the sound quality is not very good, and it is difficult to open up should you want to upgrade. But that’s about it.

This laptop packs a great design, a great display, excellent performance, and about average battery life. The design is of the laptop, is the most appealing part, followed by its performance. For something so lightweight and thin to pack such performance is impressive in itself. Plus, this is a laptop you can take to your office and not worry about showing off too much, and that matters to a lot of people. 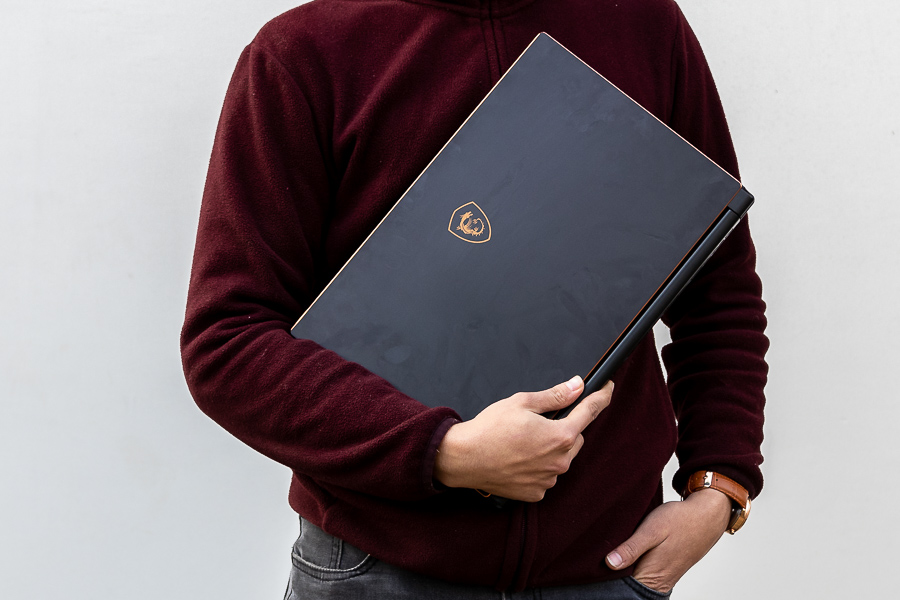 The MSI GS65 Stealth Thin can cost anywhere from $2000 to $3000 based on the configuration. There are quite a few configurations available from GTX 1060 Max-Q graphics and 256 GB storage, to all the way up to GTX 1070 Max-Q with 1 TB storage and 32 GB RAM. Now, I have no idea about the price of our specific unit internationally but it costs Rs.2,90,000 in Nepal.

But one thing is now, with the CES 2019 behind us, this laptop is getting refreshed with the RTX 2080 Max-Q graphics. And you can easily tell the performance is better on that one. So maybe, getting that would be a better investment or future-proof. But then again, that will take time to make its way in here. And they will be more expensive. So, this one right here is also a good purchase. The price does sound steep, but against similar competitors like the Razer Blade 15, this one, to me, is a much better deal.