In the smartphone world, Infinix is a rather new name. It was founded in 2013 when Transsion Holdings acquired Sagem Wireless. It’s a Hong Kong-based smartphone manufacturer with its headquarter in Shenzen. Infinix is a youth-centric brand that launches feature-rich smartphones at a rate that does not leave a hole in your pocket. With the “The future is Now” tagline, Infinix appeals to the younger generation that are looking for stylish yet affordable smartphones. Infinix smartphones are influenced by French design because of the company’s origin. The company is also expanding its portfolio to include audio accessories. The brand is active in Europe, Africa, Latin America, Asia, and the Middle East. In this post, we have listed out different Infinix mobile phones along with their official specs, price, and availability in Nepal.

Smart 4 was the first Infinix device to launch in Nepal. The device was exclusively launched via Daraz. Then the company took a pause for some months and made a proper debut with Infinix Hot 9 Play. It was also launched exclusively via Daraz. The official distributor of Infinix smartphones in Nepal is Ola Electronics. Since its establishment in 2010, Ola has been committed to bringing international products to the Nepalese market. 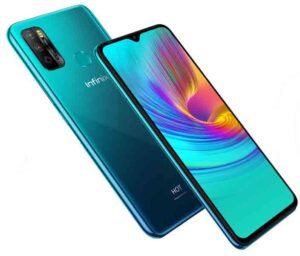 Infinix Hot 9 Play is the cheapest entry to Infinix Hot 9 series. It features a 6.82-inch IPS display with an HD+ resolution of 1640 x 720 pixels. There is a punch hole on the front of the device that houses the 8MP front-facing camera and LED flash. On the back, the device features a gem cut design.

It is available in two memory configurations – 2+32GB and 4+64GB. The base variant features MediaTek Helio A22 chipset paired with IMG PowerVR GE8320 GPU. The 4+64GB variant is powered by Helio A25. It flaunts a 13MP primary camera on the back that is accompanied by a low light sensor. Interestingly, the device features triple LED flashes. The device is backed by a massive 6,000mAh battery and features a rear-mounted fingerprint sensor for biometrics. 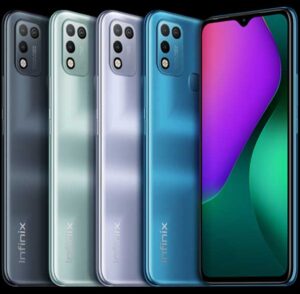 Infinix Hot 10 Play features a 6.82-inch HD+ panel with a waterdrop notch for the 8MP selfie shooter. On the back, we get to see a rectangular camera module and a fingerprint sensor. The former encloses a dual-camera setup of a 13MP primary camera and an AI lens.

The phone is powered by the Helio G35 chipset. Only the higher-end 4/64GB variant of the device is available in Nepal right now. The phone features a 6,000mAh battery that supports 10W charging via a MicroUSB port.

Infinix Hot 10 sports a 6.78-inch display with an HD+ resolution of 720 x 1640. The phone has a left-aligned punch-hole cutout for the 8MP selfie camera. Infinix has included two LED flash for the selfie camera – one on each side of the earpiece. 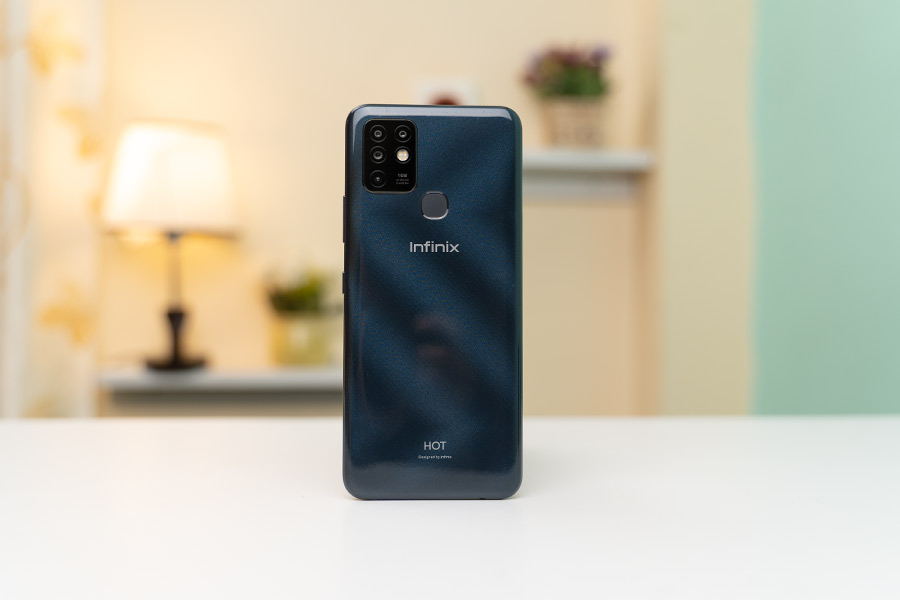 On the back, we get to see Infinix’s signature gem-cut finish on the plastic panel.  The quad-camera setup on the back consists of a 16MP primary camera, two additional 2MP sensors, and an AI sensor. The phone is powered by MediaTek Helio G70 and comes in a single memory configuration of 4/128GB. Fueling the device is a 5,000mAh battery that supports 10W charging. Other feature includes a rear-mounted fingerprint scanner, DTS Audio,  and OTG.

Infinix Smart 5 sports a 6.6-inch IPS display with a waterdrop notch that houses the 8MP AI selfie camera. The screen has an HD+ resolution of 720 x 12600 pixels. On the back, we get to the see gem-cute design that the company is known for. The device is powered by the quad-core MediaTek Helio A20 that is clocked at 1.8GHz. The 3GB of RAM in the device is paired with 64GB of internal storage. On the software front, it ships with Go Edition of Android 10. 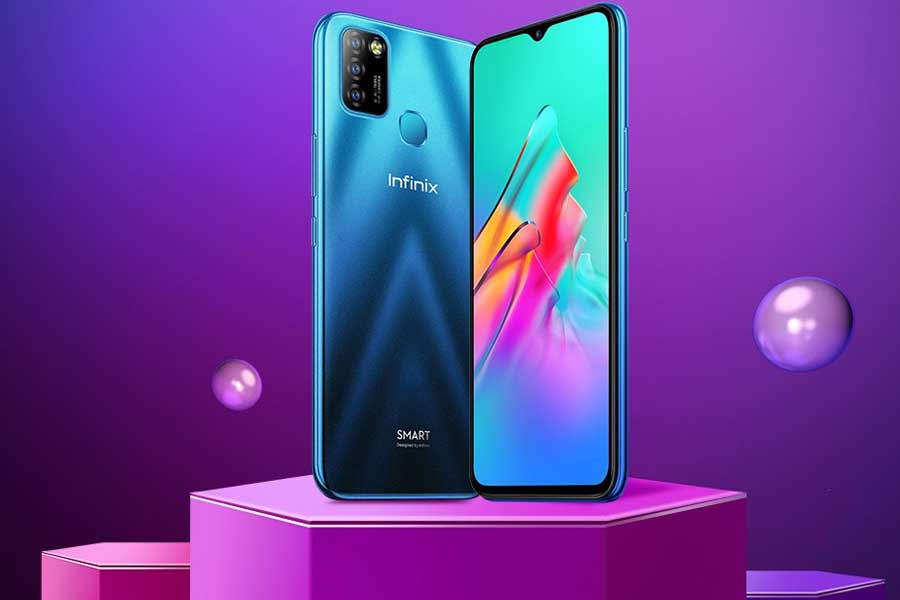 The device is listed with a 13MP triple camera. However, the two other lenses accompanying the primary camera are QVGA lenses. Infinix has also included a triple flash. Even on the front, there is a dual flash for the 8MP front camera. The Smart 5 comes with a massive 5,000mAh battery that supports 10W charging. The fingerprint sensor is mounted on the back of the device.

It is meant to be the cheaper alternative for Note 7. It comes with a 6.6-inch HD+ panel with a circular cut-out on the top left corner for the 8MP AI selfie camera. Unlike the vanilla Note 7, it is powered by the Helio P22 chipset. The base variant comes with 4GB of RAM and 64GB of internal storage. But there is another variant with a 128GB of internal storage.  It ships Android 10 with XOS 6.0 on top. 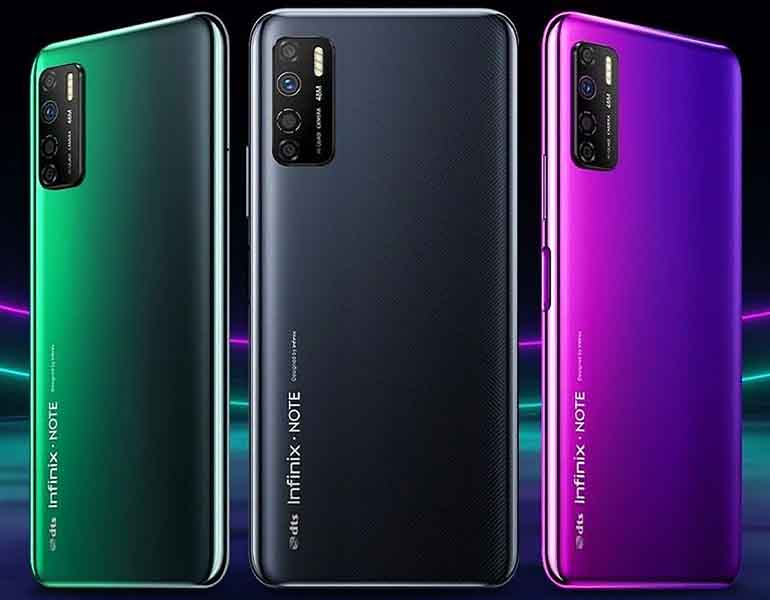 The device flaunts a 48MP quad-camera setup on the back. The primary camera is accompanied by a 2MP depth sensor and a 2MP macro lens. There is also a QGVA sensor. There is a 5,000mAh battery backing up the device. The fingerprint sensor is mounted on the side of the device. 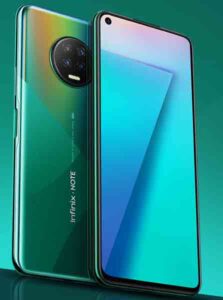 The Note series was initially launched in 2013. It was targetted toward business professionals that are looking for extra functionality. Unlike the Hot 9 Play, the Infinix Note 7 comes with Helio G70 chipset, which is a proven performer in the budget segment. Infinix will launch the 4GB + 128GB variant in Nepal.

Infinix Note 7 sports a massive 6.95-inch screen, but with an HD+ resolution of 720 x 1640 pixels. The device features a trendier circular cut-out to house the 16MP front-facing camera. At the back, the device flaunts a 48MP quad-camera setup. The primary camera is combined with a 2MP macro sensor, a 2MP depth sensor, and a low-light video camera. The device is backed by a massive 5,000mAh battery with support for 18W SuperCharge.

Infinix Note 8i sports a 6.78-inch TFT IPS panel with a left-aligned circular cutout for the 8MP selfie camera. The latter is accompanied by the dual-LED flash. Like most of the offerings from the company, the Note 8i has an HD+ resolution has a stylish plastic rear panel. The device is powered by the MediaTek Helio G80 chipset. The device is available in a single memory configuration – 6/128GB.  The phone runs on XOS 7.0 based on Android 10. A 48MP primary camera leads the rear camera setup. It is accompanied by two 2MP sensors for macro and portrait shots, respectively. Completing the setup is an AI sensor. Infinix has also included a quad-LED flash. The phone is fueled by a 5200mAH battery and it supports 18W charging via the Type-C port. There is a side-mounted fingerprint scanner for biometrics.

For service related queries, you can contact Ola Electronics at [email protected] The service center is located at Tamrakar Complex, Pako New Road. For regions outside Kathmandu Valley, Infinix Nepal has arranged pickup points where users can drop their phones for repair You can also reach out to Infinix Nepal via its official social handles.

Infinix may not be a household name in the Nepalese market but its future looks promising. Infinix smartphones try to blend French-inspired design with technological trends at affordable prices. As of now, the portfolio of Infinix Nepal is limited but the company has promised to launch further devices. Infinix smartphones can be purchased via online platforms like Daraz.