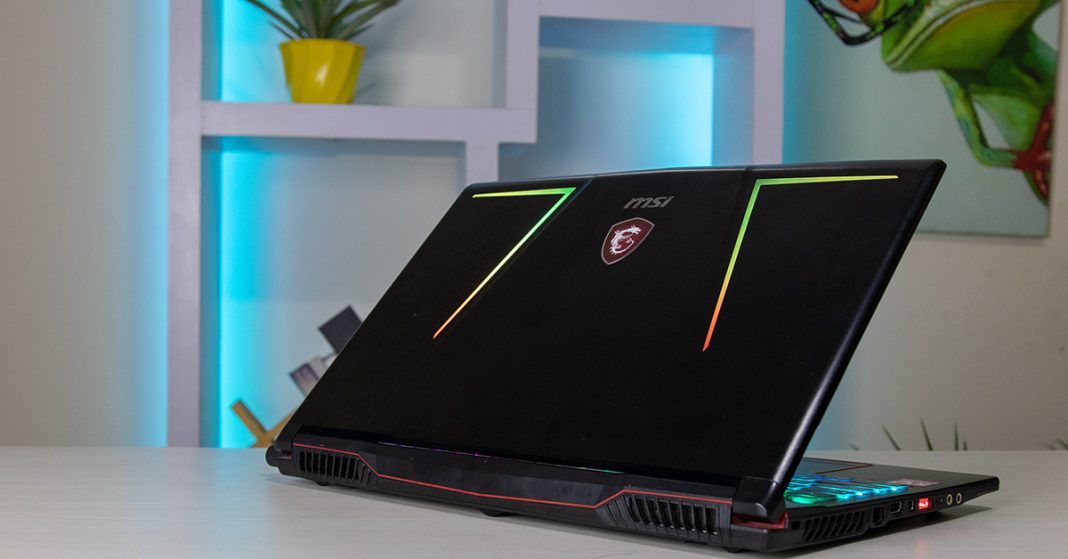 But what else does the MSI GE63 Raider RGB offer besides a light show? Well, the GE-series from MSI aren’t as powerful as their GT siblings. But the idea behind the GE series is to combine higher-end features like the 120 Hz screen, and individually lit keyboard in a more affordable lineup. And on top of that, the GE Raiders don’t compromise on power either.

First things first, the design. Design wise, it’s your typical MSI gaming laptop. A metallic body with that Red Dragon shield. It is pretty similar to the last generation MSI GE63 Raider…except that this one has the RGB Mystic Lights on the lid too! That’s some pretty awesome stuff, and what’s more? These lights are programmable with all the effects of the MSI’s Steel Series individually lit keyboard. And that is very cool! Besides that, you have a solid metallic build all over. Even the keyboard deck is made out of metal, with only the bottom panel made out of plastic. The metal body all over gives you a great feel of touch. The ventilation is shifted to the underside and and the sides, with large exhausts at the sides and the back of the deck. This laptop, at 2.9 cm is bulky, but is still ergonomic nonetheless. This unit weighs some 2.5 kg, and that’s quite heavy to be carried all day long.

The build, with its heft, feels quite sturdy. Though I’ve never had any complaints with MSI’s construction of their laptops. But it is a gaming laptop, with quite a lot of stuff packed inside. And so, I’m still scared of dropping it. It also packs giant looking speakers underneath that chassis, but giant as though they maybe, the speakers don’t sound as loud as expected from the size.

You get enough ports – three USB As, a USB-C, head phone jack, HDMI, Ethernet and an SD card slot. The USB-C doesn’t support Thunderbolt 3, however. There’s a separate input jack for a mic as well. The USB A ports glow red – and besides looking cool, they also help guide you to insert your flash drives in the dark. 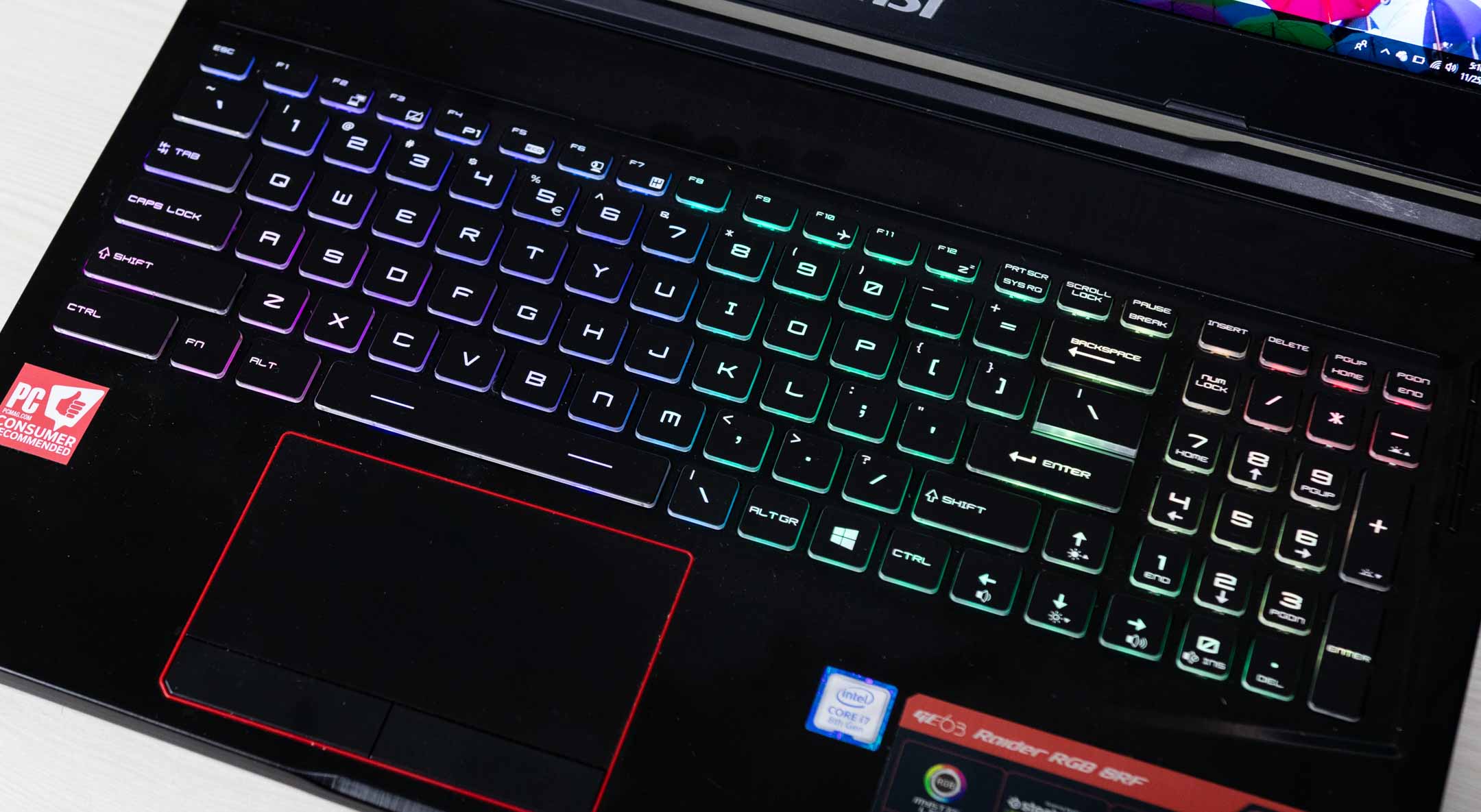 This laptop packs the Steel Series Engine 3 Keyboard, which is built for gaming, and features the individual key lighting. You get over 16 million colors on the keyboard lighting, and there’s a dedicated switch right beside the keyboard beneath the power button to switch effects. There’s also a button to turn the cooler boost on / off as well. The keyboard has a lot of features packed into it, and it can take a while to explore all of it. It’s steel series 3, I probably don’t have to say much about that. But overall, the keys give good feedback, there’s good amount of travel and the typing’s pretty comfortable too. 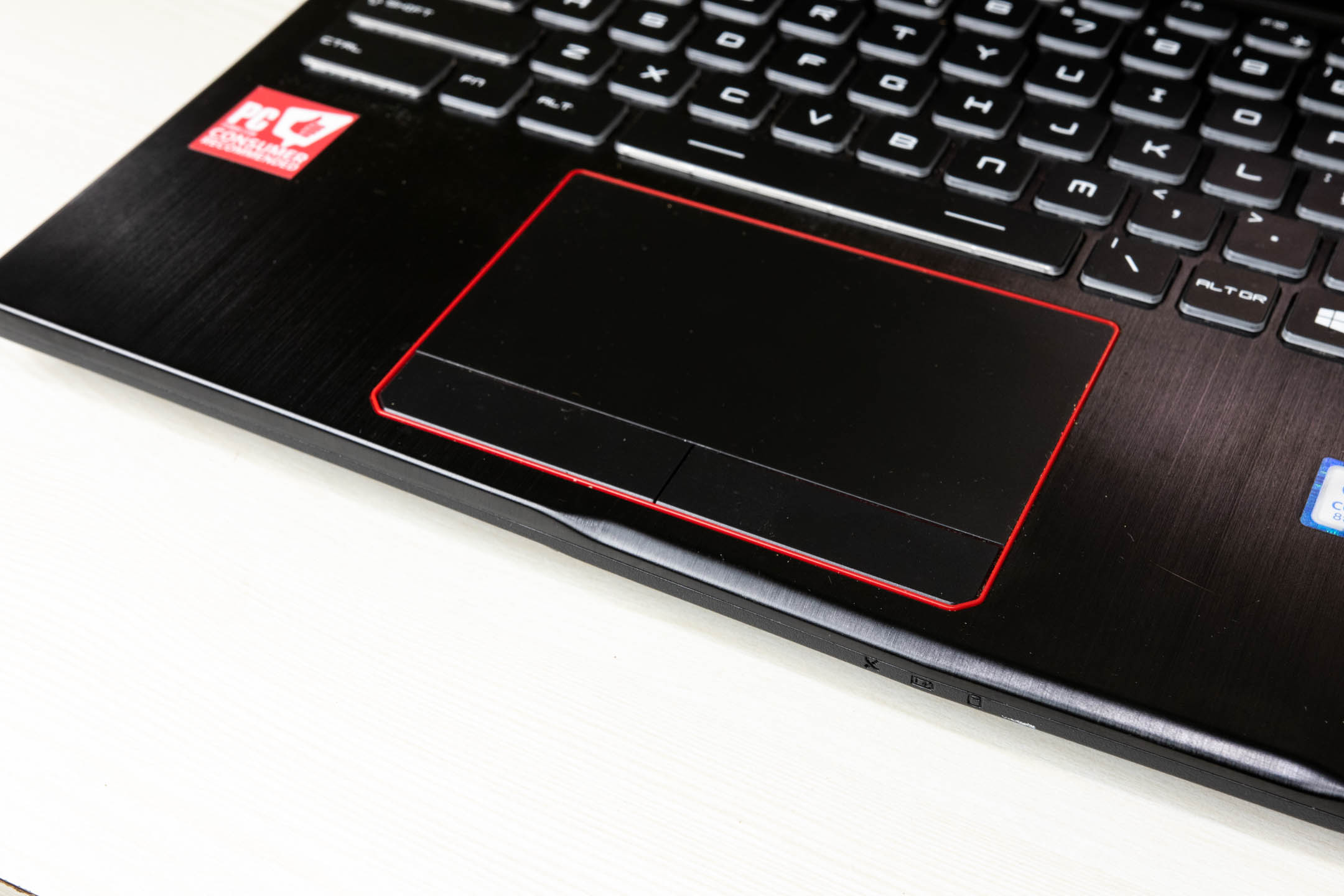 The trackpad is large and feels nice. It has Synaptic Drivers, so, the gestures are not very accurate, but overall usage is pretty good, though. The tracking is nice and smooth, and the dedicated hardware buttons feel tactile. No complaints in the keyboard and trackpad department.

The display is another great thing about this laptop. A 15.6” Full HD display gives you great viewing experience. Add the 120 Hz refresh rate and a 3 milliseconds of response time to it, and this becomes one of the fastest laptop screens on the market. Gaming feels very fluid on the screen, and maybe I cannot comprehend all of that, but gamers are gonna feel right at home. This screen, however, is a TN LCD panel, but the super fast response time means it has to be a TN panel. But even for that, the image quality is good enough, but due to that very reason, the viewing angles on it are not very good. However, the screen is anti-glare, so, you will face very less problems with any reflections on it.

Everything else about the display is simply great. The color accuracy is there with 100% SRGB. It also has a 94% NTSC Color Gamut coverage, which is great for gaming and also good enough for editing or such stuff. There’s also the MSI True Color mode, which claims a 100% Adobe RGB, but of course, that is not quite possible on a 1080 panel. Full brightness measured around 330 nits, which is a bit better than some other laptops. But still, I’d like it have a little bit more brightness.

The inclusion of an 8GB GTX 1070 graphics card is what compliments your fast screen. You also have the latest 8th gen Hexa-core i7-8750H processor combined with 16 GB of RAM. No doubt, it’ll handle any kind of work you throw at it. With this, there’s no such thing as too many tabs on your browser, or too many apps open or things like that. Heavy applications like Adobe Photoshop or Premiere run without any kind of stutters whatsoever.

Also, with a 256 GB SATA M.2 SSD and a 7200 RPM 1 TB HDD, your storage needs are pretty well covered.The laptop actually has two NVMe slots, but packs SATA drives. Still, the SSD that comes with it gives you good enough read write speeds. On our tests, it gave us up to 2606 MB/s of read speeds and 1189.7 MB/s write speeds.

Gaming on this laptop is also amazing! You get a good amount of Frames per second even with quite Graphic Intensive Games like The Witcher 3 and Fortnite on Ultra Settings. Lesser graphic intensive games like Dota 2 or CS:GO are even better…it just does everything well! There is also a GTX 1060 variant available, but if you want the most out of games, then go for the GTX 1070. 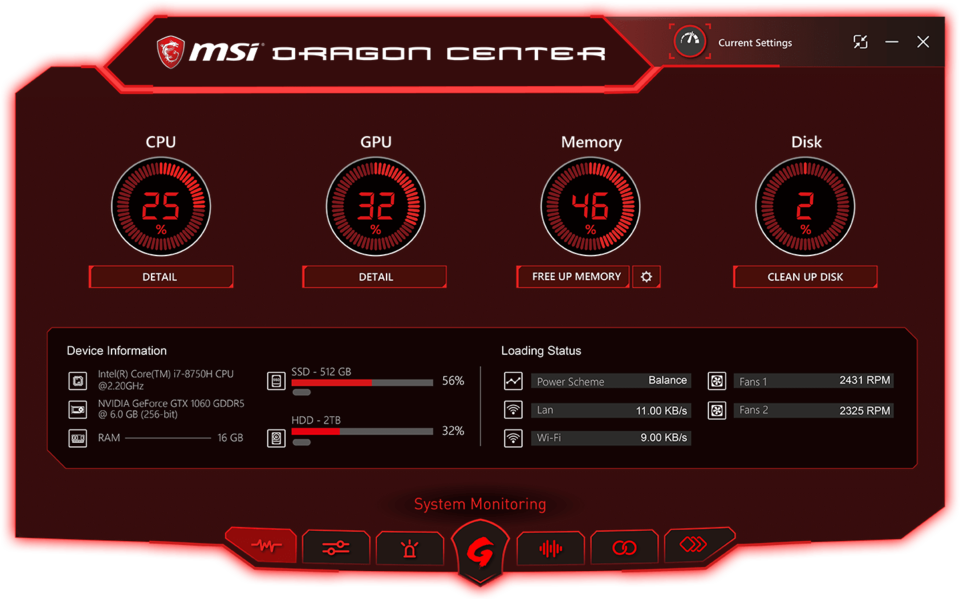 As usual, MSI’s tuning and monitoring software, the Dragon Center is also here on the GE63 Raider. With this pre-installed program, you can adjust system performance, keyboard lighting, power settings, fan behavior, and display values. From there, you can set how you use your laptop – in low power mode, or performance boost, or such.

There are various modes on the cooling fans as well. Mostly, and advanced cooling options will do the work too, but if you hit the cooler boost option, it can give you the best frame rates on your gaming or while doing something intense like rendering a video. This is quite a nice touch, and the fact that you can do it with a single button on the side makes it even better.

The thermals on this laptop are pretty good as well. The temperature levels it can get to can be large sometimes, but even with that, there is very less thermal throttling, which are not really noticeable. Even with the cooler boost on, the highest external temp we recorded was a 50.4-degree centigrade while playing Witcher 3, but there was no throttling whatsoever. It seems the large Cooler Boost 5 system with dual fans and seven heat pipes do their job really well.

The battery on the laptop is poor though. It has a 6-cell 51 Watt-hour battery, which is pretty small considering the laptop’s size. Few gaming laptops give you a battery life that last you a day, and this is no different. It gives you about 45 minutes of gaming time on high settings and with the lighting on, and about 2 and half hours on regular usage. You absolutely have to carry the charger around with you, and that thing is also pretty heavy. If you want to talk about the negative aspects of the laptop, you kinda have to nitpick on the small things, but this laptop does the major parts pretty well. It is a very powerful laptop that has great regular and gaming performance. The display is a good one, too, and there is no thermal throttling whatsoever. It is only the small stuff that’s lagging behind. For example, the metallic build and texture is great, but it catches your finger smudges easily, and are difficult to get rid of.

And maybe people rarely notice the web-cam on gaming laptops, but the 720p web-cam on this laptop sucks. The quality is muddy and pretty much unusable. Also, the speakers on this thing aren’t as good as expected from a laptop of this caliber.  Now I already talked about the viewing angles on the TN panel. So, while I’m at it, this laptop is pretty hard to open up. Inside, this laptop has two NVMe slots with one SATA drive, and two RAM slots, which makes quite the room for upgrades. But this thing is very hard to open, so if you do want to upgrade it, you have to be extra careful.

So, that’s pretty much it about the MSI GE63 Raider RGB 8RF. Some small stuffs might bother you, but other than that, every thing major about it is just good. And on top, the RGB Mystic Lights are sweet icing on the cake.

But of course, such a laptop won’t come cheap. This beast costs about $2000 dollars internationally, and Rs.250,000 in Nepal. But I believe that if you want a great gaming laptop, why not go all out? You get top of the line performance with the fastest screen around, and of course, a light show of your very own!