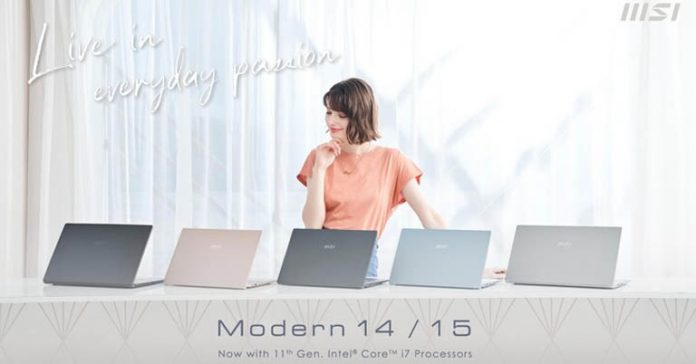 Unlike the Prestige and the Summit series, the Modern series focuses on everyday computing. It is targeted at small businesses and normal PC users. The laptops in this lineup sport a modern and colorful design. With the series, MSI has tried to provide features of the Prestige and Modern series without much compromise. Thus, the laptops under the latest Modern Series come with 11th-gen Intel Tiger Lake processors and Xe graphics. You can decide to go with AMD Ryzen 4000-series variants as well.

Needless to say, MSI Modern 15 comes with a bigger screen and weighs heavier than its smaller sibling. Regardless of the screen size, users get an IPS-level panel with an FHD resolution of 1920 x 1080 pixels.

As mentioned earlier you can choose between 11th-gen Intel Core or AMD Ryzen 4000 series CPU. Fortunately, both options are available in Nepal but the ones with Ryzen processors are limited to the Modern 14, which is available with either Ryzen 5 4500U or Ryzen 7 4700U. These don’t have dedicated graphics support so you will have to rely on the integrated Radeon graphics. Likewise, these laptops feature two slots of DDR4-3200 RAM and one M.2 SSD combo slot.

On the other hand, you can choose between 11th-gen Intel Core i5-1135G7 or Core i7-1165G7 too. In addition to the integrated Iris Xe graphics, the Intel variants also ship with a dedicated NVIDIA GeForce MX450 GPU. The Modern 14 comes with a single SO-DIMM slot whereas there are two of them in the Modern 15. Similarly, MSI Modern 14 has a single M.2 (NVMe PCIe gen4) slot, while its bigger sibling has an additional M.2 PCIe Gen 3 slot.

Both MSI Modern 14 and 15 series laptops pack a 3-celled 52Whr battery. The Intel variant ships with a 90W adapter whereas the AMD variant includes a 65W adapter. Regardless of the choice you make, you will get a backlit keyboard, HD webcam, a combo audio jack, and a dual speaker setup in all of them. For connectivity, the new Modern laptops support WiFi 6 and Bluetooth 5.1. However, you would want to double-check the specs given that few of the AMD variants come with WiFi ac and Bluetooth 5. The port selections also differ between variants.

MSI Modern series of laptops is now available in Nepal with a starting price of NPR 100,000 for the Ryzen 5 5500U variant. Similarly, the Intel variant starts at Rs. 135,000 for the Intel Core i5-1135G7. The detailed list of MSI Modern Series with specs and price is listed in the table below.