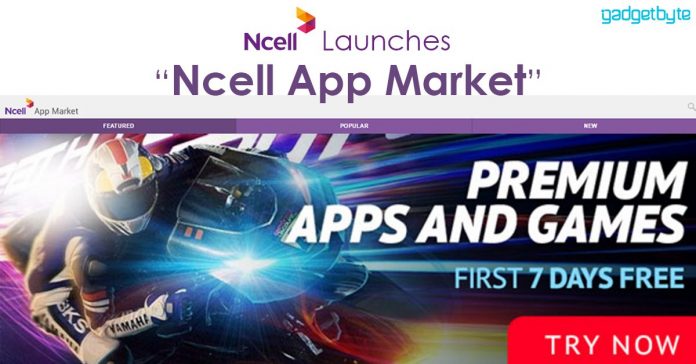 Ncell, a privately owned mobile network operator in Nepal, has released a new app market called Ncell App Market. It costs Rs 15/week (make of it what you will). Currently, this app market includes Android apps only. Yet another disappointment for the iPhone users.

That means for Rs 15/week you can officially download as many games and apps as you can. I asked a Ncell representative and they say it’s all authorized and legal. This seems pretty good as a paid app usually costs more than a $1.

Talking about the bad part, you only download apps that are actually available in the store. They don’t seem to have a huge collection. Granted the Ncell app market just released a few days ago. And Ncell says they are going to update the app market every Wednesday. The other thing is Ncell could have made an actual app for this. Instead, they rely on your mobile’s browser. To get started, visit apps.ncell.axiata.com using your Ncell’s internet. After you have successfully subscribed you can use your wifi again. Before you download anything, go to your phones’ settings then security and enable “Unknown sources”. Then only you can install your downloaded apps in Android devices.

I couldn’t find any A title games in the store, I didn’t expect to either. So don’t expect paid games like Minecraft pocket edition or Need for speed. But they still have a few paid apps and games there that you can download legally for just Rs 15/week. As a promotional offer, all available apps are now free but don’t expect them to be free forever. So, if you find an app that is worthy of installing, download it right away.