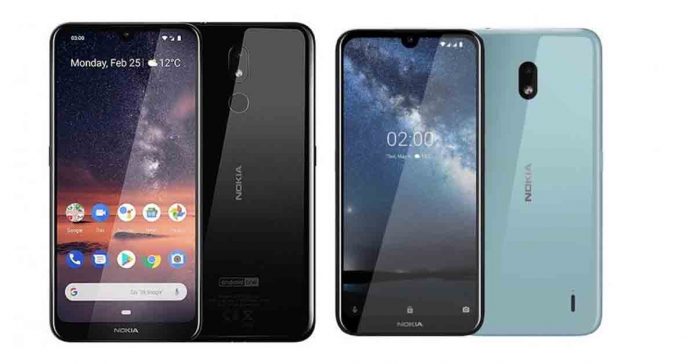 Nokia 2.2 is a budget-friendly smartphone that comes with a 5.71″ HD+ display. It runs on the stock version of Android Pie and is one of the cheapest smartphones that will receive the Android Q update. It is powered by a MediaTek Helio A22 chipset and has a 3,000mAh battery. Nokia 2.2 is available in two variants: a 2GB/16GB model and a 3GB/32GB model.

Talking about the cameras, there’s a single camera setup both at the front and the rear. The rear one is of 13MP whereas the selfie shooter is of 5MP. There’s a water-drop notch up front to include the front camera. Though there is no fingerprint unlock, the device does use a facial recognition system. Nokia 3.2, the other similar budget smartphone, appears to be an improved version of the Nokia 2.2. It offers a 6.2″ HD+ display with a 2.5D glass on top of it. The device uses Snapdragon 429 and runs on Android Pie. The rear camera is similar to the Nokia 2.2 – a 13MP single shooter. But, the front camera is an 8 MP shooter on the water-drop notch upfront. Also, it packs a large battery of 4,000 mAh and has a fingerprint scanner at the back. Though the device comes in two variants, the 3/32GB variant is available in Nepal. Nokia 2.2 and Nokia 3.2 Price in Nepal and Availability

So, what do you think of these budget devices? Do you still like Nokia phones? And are they appealing enough for you? Do let us know.