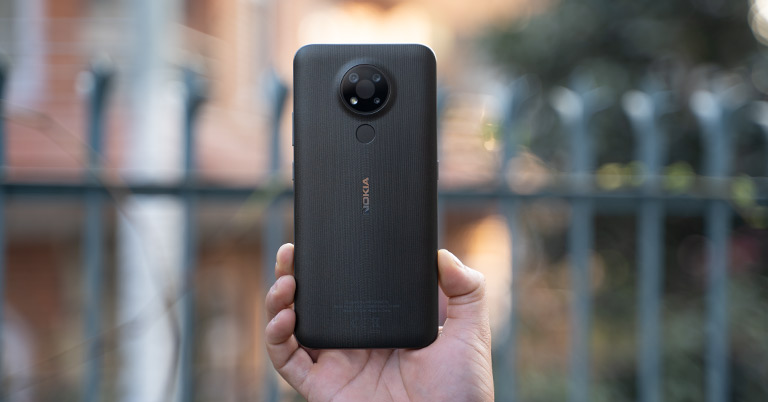 Nokia added the 3.4 to its lineup of budget smartphones back in September. It does look like a decent upgrade over its predecessor – the Nokia 3.2. Yet, the bigger, and the more important question is whether the new Nokia 3.4 is competent enough against the grueling competition from companies like Xiaomi, Realme, POCO, and such. So, let’s find out all about the Nokia 3.4 in this review.

Starting with the design, as expected, Nokia has gone with a polycarbonate material on the 3.4. The back of the phone has this 3D nano-textured finish which makes for an easy grip. It doesn’t attract fingerprints or smudges that easily which is a relief. Even though the device offers a nice tactile feel, throughout the review period, I did find it a bit odd how the Nokia 3.4 almost comes off sticky. Like, the phone seems as if it is loosely glued to my hands. So, while it seemed unnecessary at first, I ended up slapping in the clear case anyway.

Still, the phone is extremely well built and I didn’t notice any creaks or other manufacturing defects. This “Dusk” color variant that I have with me looks quite beautiful, although you can go for either Fjord or Charcoal options as well. Nokia 3.4’s button placement should feel immensely familiar if you’ve used any recent Nokia devices.

Here, you get the power and the volume rockers on the right frame, whereas the left contains the 3-card SIM tray and the dedicated Google Assistant button. To my disappointment, the GA button is still not customizable through the system settings itself, although you can use other third-party apps to do so.

In some regions, Nokia ships the single SIM variant of the phone—so be sure to check it out if you’re planning on getting one. Likewise, you’ll find a 3.5mm headphone jack and a primary microphone at the top, and a USB Type-C port, speaker grille, and a secondary microphone at the bottom frame of the device. If you recall, the Nokia 3.2 came with a micro USB connection. So, it is nice that the company finally shifted to the Type-C standard.

Coming to the display, Nokia has finally joined the cool kids on the block, and gone with the trendier punch-hole cutout instead of a notch. The phone has a 6.39-inches IPS LCD panel with an HD+ resolution. While the company could’ve gotten a pass in the past for the inferior pixel count, seeing how other manufacturers have leveled up by giving FHD display in this price range, Nokia is going to take some heat. As it should.

Nokia 3.4 doesn’t come with any kind of Gorilla Glass protection, so putting on a quality tempered glass is highly advised. Still, throughout my usage, my unit of the phone doesn’t seem to have suffered from any scratches of sorts. Anyway, for what it’s worth, the display is fairly vibrant and the color tone of the panel is acceptable as well. Even for an HD screen, things look sharp enough, so you definitely won’t have any problem reading texts on this display. However, my unit of the Nokia 3.4 seems to have slight backlight bleeding on the bottom of the display. I didn’t notice it under well-lit conditions, but when moving to a rather dim environment, this was vividly noticeable. Besides this, there is no such issue on other edges of the display. And yeah, the punch-hole cutout does add to the modernity, but the unfathomable chin with the Nokia branding just… washes away the lavishness.

Getting down to performance, powering the Nokia 3.4 is Qualcomm’s Snapdragon 460 chipset. This 11nm silicon is not at all capable to compete against what the aforementioned competitors boast in their devices at this price point. Paired with either 3 or 4GB of RAM and up to 64GB of internal storage, I encountered frequent lags on the phone—especially when multitasking. To note, my review unit of the Nokia 3.4 comes with a 3/64GB memory configuration.

I’m getting this feeling of déjà vu when talking about the performance of this phone because if you’ve watched any Nokia review we’ve done lately, we’ve complained similarly. The thing is, although Nokia still has a big following after years of hiatus in the market, HMD Global can’t and shouldn’t hope to continue selling phones solely based off of the imbued nostalgia. With such a cut-throat market competition, this scheme simply isn’t going to last very long.

But I digress. Running lightweight apps is perfectly fine on the phone. Yet, when throwing a few games into the mix, the performance takes a big hit. Out of 3GB of available RAM, you only get about 1.2GB to work with which is simply not enough for our evolved smartphone use case. Maybe if Nokia 3.4 ran on the less-demanding “Go” edition of Android things would’ve been somewhat better. Moreover, while I’m all for the stock Android experience, it feels like Nokia puts absolutely zero effort to complement its hardware with optimized software. 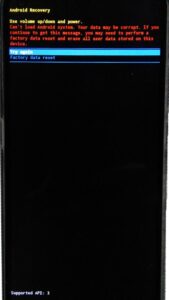 That sentiment is further resonated with how the October security patch completely bricked my device. Don’t know what happened here but right after installing the said update, the phone failed to boot up and went into recovery mode instead. With no other option in hand, I had to factory reset it—wiping off all data, files in the process. And the very next day, I was playing a couple of games of PUBG Mobile when suddenly, the Nokia 3.4 just froze all of a sudden, only to boot into the recovery mode—thus forcing me to factory reset the phone once more.

I searched the web to see if anyone else is facing the same issue but couldn’t find anything. So, while the phone is already so late on updates (which is uncharacteristic of Nokia, to begin with), this unstable update thing is yet just another way the company is axing its own foot. Since the phone is a part of the Android One program as well (meaning guaranteed 2 years of OS update and 3 years of monthly security updates), I seriously hope this blunder is strictly avoided in forthcoming updates.

Okay, let’s talk gaming now. As you’d imagine, non-demanding titles like Clash Royale, Injustice 2, and such worked perfectly fine on the phone. On the other hand, Call of Duty Mobile can be pushed to very high graphics and high frame rate on Nokia 3.4. However, under these settings, you will face slight stutters every now and then. While not entirely unplayable, you will want to turn down the settings to medium graphics and high frame rate for smoother gameplay. Furthermore, PUBG Mobile plays best under medium frame rate and smooth graphics—although you can bump the frame rate to high as well.

Let’s talk about the cameras now. While last year’s Nokia 3.2 came with a single rear camera, the company has added two more lenses this time around. Enclosed inside a circular module that slightly rises above the back panel, the camera placement looks quite nice. Talking about the lenses themselves, you get a 13MP primary camera alongside a 2MP depth sensor and a 5MP ultra-wide lens. To review the cameras of the Nokia 3.4, we compared them against the ones from POCO M2.

Starting with the normal daytime images, as you can see from these samples, the images from M2 have better details and dynamic range, whereas the ones from Nokia 3.4 looks grittier.

The color tone of the images varies wildly though. While the photos from Nokia looks slightly pale and yellowish, the M2 leans on the orangish/reddish side of things.

On to the wide-angle shots, images from Nokia 3.4 tend to look dark compared to the M2. Reds are also slightly undersaturated here.

And just like normal images, the POCO M2 produces comparatively punchier photos. However, you can see how the sky looks blue and natural on Nokia 3.4 on contrary to the POCO M2.

Edge detection on portrait images is quite similar on both phones.

But, subjects look a-bit dark on the Nokia 3.4, while the ones on POCO M2 turn out overly reddish. It’s a matter of personal preference but in this instance, I’d go for the Nokia 3.4.

Getting to selfie images, subjects look very soft and smooth on the 3.4, while you’ll enjoy much more details and better exposure on the M2.

Portrait selfies share a similar story too and images from POCO M2 even have slightly better edge detection.

Nighttime images on Nokia 3.4 are nothing to write home about. Photos look soft, hazy, and lacking in any sort of detail.

It does have a dedicated night mode as well, which is not a complete gimmick like on the Nokia 2.4. It does boost the luminance by a bit but does nothing in terms of details and sharpness.

When it comes to videos, you are locked in at 1080p/30fps on the Nokia 3.4—on both front and back camera. In this setting, as you’d expect, there is no stabilization of any sort.

Nokia 3.4 gets its juice from a decent 4000mAh battery. But given its unadulterated OS heritage, this should give a fairly amount of endurance on everyday usage. And that it did. I consistently got about 6-7 hours of screen-on-time with the phone. This stat comes from a fairly heavy usage consisting of switching between social media apps like Facebook, Instagram, Reddit, playing heavy games like COD, PUBG, and binging YouTube contents—all at around 60% brightness. So, the Nokia 3.4 will easily last through your day, with some charge to spare.

Charging the phone, on the other hand, was a pain. To get from 0 to 100%, during the review, I recorded that Nokia 3.4 took a ridiculous amount of time: 3 hours and 52 minutes and 53 seconds to be precise. That’s abnormally outrageous seeing how the battery size isn’t that large, to begin with. And 10W of power shouldn’t take that long. Turns out, you’re only getting a 5W power adapter inside the box. What?! That is like the lowest of the lows. How could Nokia purportedly advertise 10W charging on a phone and only ship a 5W brick?

Moving on, the single bottom-firing speaker on the Nokia 3.4 doesn’t spark much joy either. The audio is tinny, and heavily lacking in detail. Plus, it can’t get sufficiently loud too. You also get an earphone inside the box but that just adds to the pile of disappointment with this phone. It sounds shallow and just like the speaker, doesn’t offer any detail either. Let me talk about the fingerprint sensor now. Like every other budget phones, this one’s particularly not that fast and readily takes at least a second to unlock the device. On the plus side, you can summon the notification panel by swiping up/down the scanner. Similarly, Nokia 3.4 also supports face-unlock, which is just as slow too.

Overall, the Nokia 3.4 has failed to impress at any level significant. I’ll admit, the design might be enticing to many, including me. But, from its underwhelming performance to average cameras, there’s nothing really exciting about the phone. And with the security update I mentioned earlier, Nokia killed off the one thing I would’ve loved to love about it—the software experience.